A police officer in Rockwall County is out of the hospital with just a few minor injuries after he was hit by an SUV over the weekend. He says it could have been much worse.

ROYSE CITY, Texas - A police officer in Rockwall County is out of the hospital with just a few minor injuries after he was hit by an SUV over the weekend. He says it could have been much worse.

It happened Saturday along I-30 in Royse City. The officer was helping a stranded driver when the driver of that SUV lost control.

Officer Michael Baley is a tough person. He’s served in the military after being deployed overseas twice. Now, he’s been a police officer at Royse City for 14 years. He says never feared for his life like this.

"Working the problem" is Baley’s motto whether he’s on duty at the Royse City Police Department or off duty teaching life lessons to his two sons. 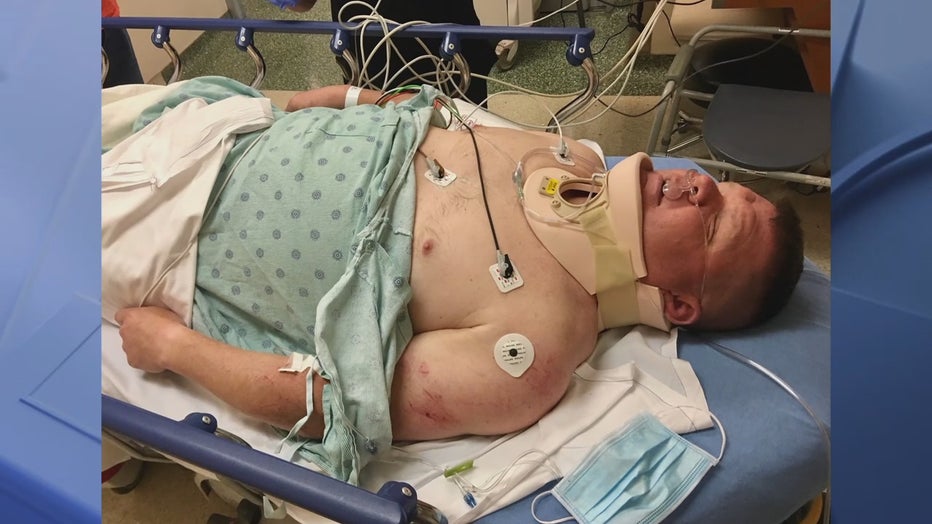 The 48-year-old just got out of the hospital Monday after a terrifying situation over the weekend.

Saturday morning, Officer Baley was helping the driver of a stranded vehicle along I-30 when someone in a white SUV lost control, swerved and slammed into him.

A dash cam captured the moment the driver lost control. The actual collision was caught on his body camera. All Baley remembers is landing headfirst in the grass.

Officer Baley was quickly rushed to Baylor Medical Center in Dallas where doctors were stunned.

"They go, ‘We don’t see any broken bones,’" he recalled. "And I was like, ‘Can you run more tests? Because your equipment has to be flawed.’"

But the equipment wasn’t flawed. Officer Baley only suffered a few minor injuries. Now, he’s back at home holding his family tight, feeling sore and thankful.

"You have to be all in. You have to put your trust in him," he said. "That’s why I like having ‘In God We Trust’ in the back of my squad car."

Officer Baley is unsure when he will go back to work. But all that he knows is when he’s cleared, he’s ready to put his uniform back on.