Dozens of students and parents attended Rockwall ISD's board meeting to express their support for a coach suspended over what other parents are calling a dangerous workout.

ROCKWALL, Texas - Dozens of students and parents attended Rockwall ISD's board meeting to express their support for a coach suspended over what other parents are calling a dangerous workout.

They entered Tuesday’s meeting together all wearing matching shirts that said "Keep Harrell."

Rockwall-Heath Head Football Coach John Harrell was suspended last week after conducting a workout that landed some of his players in the hospital. Some of them were there for days.

As Child Protective Services and the district investigate what happened, dozens of players and parents stood in solidarity to ask district leaders to not fire their football coach.

At the start of Tuesday's meeting, about 40 Rockwall-Heath students and their parents showed up in matching t-shirts supporting Harrell.

The coach was placed on administrative leave following a Jan. 6 workout that landed several players in the hospital.

"This isn’t about choosing sides," said varsity player Brady Luff. "We want to support Coach Harrell and all of our teammates. Harrell has been a father figure to a lot of these boys, including me." 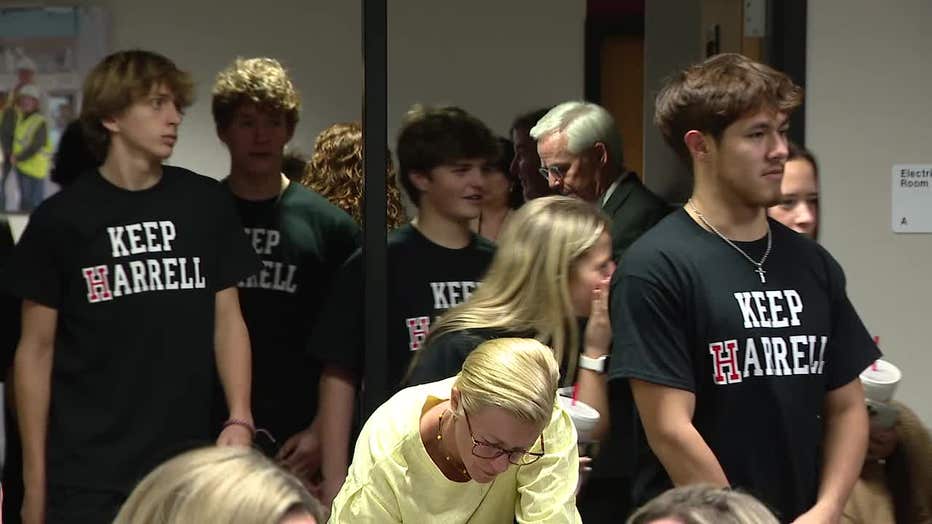 Bobby Robinson is a Rockwall-Heath football parent. He said blame shouldn’t be put on the coach for what he calls a "gladiator sport."

"I think some of us, as parents, have failed. If our kids are going to play a sport, we should push them and do what we need to at home because of the demand," he said. "It’s bound to happen again. Maybe not next year, but it’s going to happen again. Because it’s football."

But parents of hospitalized players say their kids were in fact pushed too far.

In the days following the workout, some started showing symptoms of rhabdomyolysis, a dangerous medical condition where muscle tissue breaks down too fast.

Osehotue Okokie’s son was in the hospital for seven days.

FOX 4 learned on Monday that CPS opened an investigation into the incident separate from the district investigation.

On Tuesday, the school board didn’t have any action items on the agenda in regards to the investigation, only a private meeting with its attorney.

But Board President Linda Mitchell Duran did make a brief statement after the group of Harrell supporters spoke.

"Our hearts and our prayers go out to all the children involved, all parents involved and the faculty involved," she said.

No parents of hospitalized students spoke at Tuesday’s meeting. Those we spoke with earlier this week didn’t plan on attending.

The district did say in a statement that the investigation will take time, and they are asking the community to let the process play out before "assuming consequences."