Richardson ISD is reporting positive results from strictly enforcing a cellphone-free school environment, including Forest Meadow Junior High, where the district is testing out pouches that lock phones during the school day.

RICHARDSON, Texas - Richardson ISD is reporting positive results from strictly enforcing a cellphone-free school environment, including Forest Meadow Junior High, where the district is testing out pouches that lock phones during the school day.

The pouches, from Yondr, are only being tested at Forest Meadow. The district originally planned to launch the program district-wide at its junior high and high schools, but scaled back the plan after concerns from parents. 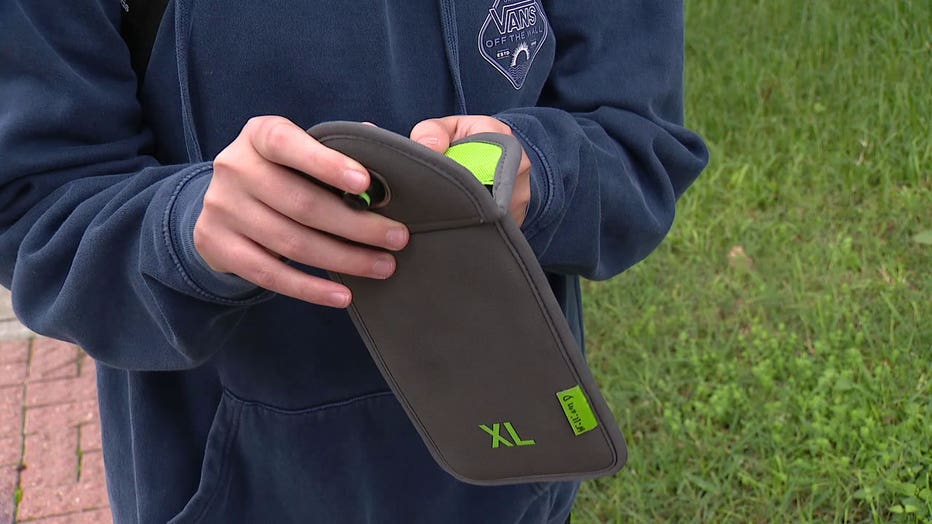 Now nearly halfway through the school year, a survey of teachers and parents show a positive opinion of the program.

Predictably, students were not as happy.

"The student one was less positive than teachers and parents," said RISD Superintendent Tabitha Branum. "I know we are all shocked by this."

You can tell from the red and orange on the charts how much students dislike having to put away their phones during class.

Interestingly though, it was a statistical tie when it came to students' opinion about a cellphone-free policy and a system to lock phones away.

About 80% of students didn't like either one, but about 45 percent of students did say in a cell-phone free environment they are able to focus more on learning.

"Last year I was more unfocused with my phone, but this year I feel like I am more focused without my phone, because I don't have access to just pulling it out of my bag. I'm not really tempted to use it," said William Davis, a Forest Meadow Junior High 8th grader.

"It's a pretty good way to keep kids off their phones, but at the same time a lot of people don't use them and a lot of people are starting to be able to open them," said 7th grader Tamyia Long.

Branum says a group of seniors she meets with gave her similar feedback.

"They answered the survey. They probably didn't like it, but all 12 of them said, ‘our teachers are teaching bell to bell. Our brains hurt, and sometimes we wish we had a break because we are being engaged bell to bell,'" she said.

The teachers' survey results looked very different from their students.

The only question that received a high number of negative responses was about what their students think of the policy.

Teachers said whether they are using the Yondr punch or simply enforcing the cellphone-free policy, they are getting at least 10 additional minutes of instruction time per day with students. 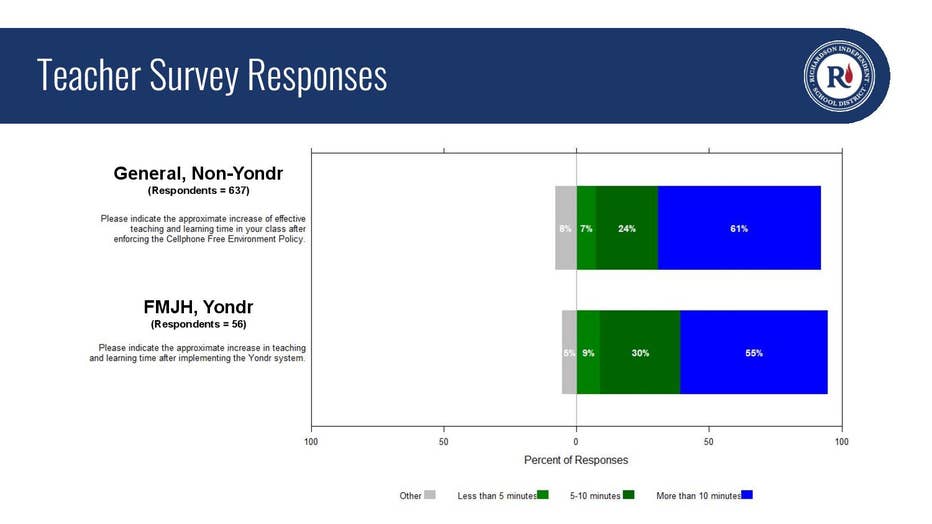 School board member Eric Eager put a value on that time.

"In a school year we recaptured 168,000 hours of instructional time. If you had to hire more teachers to fill that time it is $8.4 million," he said.

Branum says at Forest Meadow the culture is changing.

"Thanks to the Forest Meadow PTA they have helped purchase a bunch of board games, Uno games and chess games and things at lunch, because the kids are finding that they kind of want to sit and talk and they're play games at lunch," she said.

School board president Regina Harris noted the shift in the board discussion as well.

"Wasn't long ago we were having strong conversations about this Yondr pouch. Here we are tonight praising the results," she said.

In case of emergency teachers have phones in every classroom.

There are also unlocking stations for the pouches throughout the school.

Branum says she's not ready to make a recommendation about whether to expand the use of Yondr pouches district-wide.

She wants to see more data from a full school year.