OC officials provide an update on the deadly 55 Freeway shooting

Orange County officials on Thursday provided an update on the deadly road rage shooting that took the life of 6-year-old Aiden Leos.

ORANGE, Calif. - The reward for information leading to the arrest in the road rage freeway shooting of 6-year-old Aiden Leos has increased to $500,000 Thursday night.

Leos was shot and killed on the 55 Freeway in the city of Orange on May 21. Aiden and his mother were traveling from their Costa Mesa home to his kindergarten class in Yorba Linda. 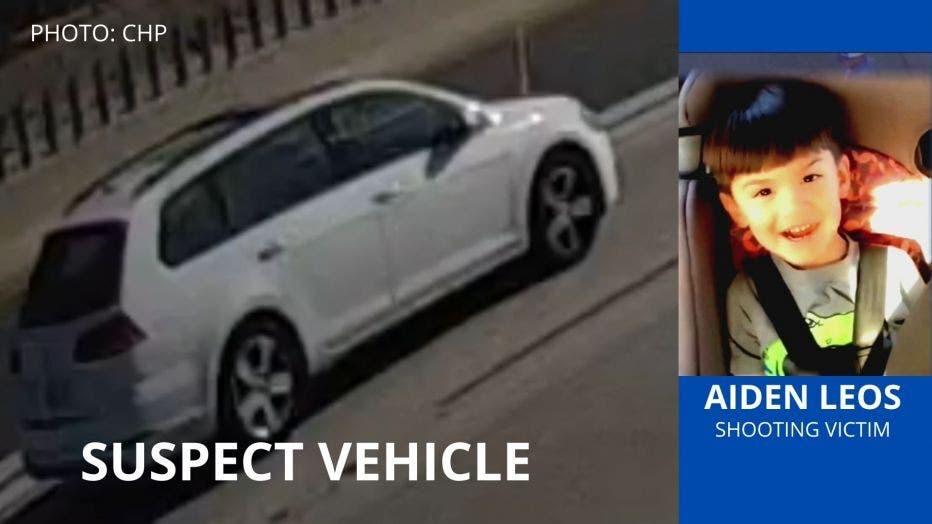 "The senseless tragedy of Aiden Leos’ death has been felt by the entire community," Costa Mesa Mayor John Stephens said in late May. "We want to do what’s necessary to bring Aiden’s killer to justice, to take him or her off our streets, and to deter others from engaging in this type of dangerous conduct."

The updated reward figure comes a week after Orange County District Attorney Todd Spitzer issued a stern warning to the suspects involved in the deadly shooting, saying, "we're not messing around anymore."

"If you saw something, if you’ve got dashcam or any sort of security camera that might have seen something, come forward," said Orange County Supervisor Don Wagner during a press conference in late May. "Maybe you didn’t catch the actual incident, maybe you’ve got something that shows the suspects’ vehicle…perhaps there’s something you saw right before the shooting that gives us information. We’re asking the public to go to aiden-reward.com or call the California Highway Patrol at 714-567-6000. "

Alexis Cloonan, who lost her little brother in a deadly shooting on the 55 Freeway, spoke on behalf of her family during a press conference on May 27.

"Aiden gets to have a funeral as beautiful as he is and we’re so grateful for that and the outpour of support. If you saw anything…please come forward, my brother deserves justice," she said.

"When we do have individuals in custody that are responsible for the murder of your brother, we will do everything in our power to seek justice on his behalf," Spitzer added.

The Orange County DA also made it clear in late May he was losing his patience and gave those responsible for the shooting 24 hours to turn themselves in.

"I want to talk to the suspects. I want the two individuals in that video to understand this is Orange County, not Los Angeles County or San Francisco. Ultimately, I’m the one…my name is Todd Spitzer. I spent the last 32 years putting people like you behind bars. It is my job as a DA to seeks justice and I’m running out of patience."

A reward was offered for information leading to the arrest of the person who killed a 6-year-old boy in a road rage shooting on the 55 Freeway in Orange.

The updated reward figure comes includes the $100,000 that Orange County supervisors approved in late May after Supervisor Don Wagner moved to offer a $50,000 reward from his office's discretionary budget and Supervisor Katrina Foley matched it. The boy's family also has been crowdfunding a $50,000 reward, and Foley says she has asked Costa Mesa to also offer a reward. On May 26, Orange County officials confirmed that $50,000 from another source of funds will be added.

"I’m glad to hear the reward is increasing; this shows our entire community wants justice for Aiden and his family," Wagner said in a statement in late May.

The reward for information leading to an arrest and conviction in the road rage shooting death of a 6-year-old Costa Mesa boy on the 55 Freeway grew to $320,000 on Friday, a day after Orange County's top prosecutor gave the two unidentified suspects a stern warning to turn themselves in and investigators released a photo of the vehicle used in last Friday's attack.

Supervisor Wagner had previously promised additional details would be released regarding the community's ongoing search for the suspect.

The family of Aiden Leos created a GoFundMe page Sunday to tout the reward offer, after a separate crowdfunding page set up earlier to help the family.

The family confirmed to FOX 11 earlier in the shooting investigation that a portion of the money raised in this GoFundMe account would be put towards a reward to catch the person responsible for killing Aiden.

"Due to the outpouring of love and support, we have reached our goal. However, we would like to continue to raise money that will go towards a reward in hopes of finding the individuals that took Aiden's life," the GoFundMe post said.

A reward was offered on Sunday for information leading to the arrest of the person who killed 6-year-old Aiden Leos in a road rage shooting on the 55 Freeway in Orange.

The boy's mother was driving a silver Chevrolet Cruze sedan with her son in the right rear passenger booster seat when another driver opened fire between 7:55 a.m. and 8:15 a.m. Friday on the northbound 55 between the 22 Freeway and Chapman Avenue, California Highway Patrol Officer John De Matteo said.

It's unknown how many rounds were fired and the only initial description of the suspect vehicle is a white sedan, DeMatteo said.

Investigators later said the vehicle may be a newer model, possibly a white Volkswagen "wagon-style" sedan.

The mother pulled over immediately and called 911 and the boy was rushed to Children's Hospital of Orange County, where he was pronounced dead, DeMatteo said.

Investigators did not provide details of the road rage incident but assured the public it was not related to the rash of suspected pellet-gun shootings of vehicles on Southland freeways.

"It was an isolated road rage incident between the mom and another driver from a white sedan," CHP Officer Florentino Olivera said at the scene.

A child was rushed to the hospital after being shot on the 55 Freeway in the city of Orange in the latest of a trend of car shootings on Southern California freeways.

"Not sure if there were passengers in that white sedan, but apparently there was a shot fired from that sedan into the silver car, and unfortunately the child that was seated in the right rear seat was struck."

The CHP asked anyone who may have dashcam camera video of the attack to contact investigators.

Relatives said Aiden's death has devastated the family. "My mom, there was a road-rage on the freeway, and someone pulled out a gun and shot my little brother in the stomach," the boy's 15-year-old sister, Alexis Cloonan, told reporters. She said there were two people in the suspect vehicle -- a female driver and a male passenger.

"He was only 6, and he was so sweet," Alexis said through tears. "He was a very, very loving boy. So please, help us find who did this to him."

The boy's uncle, John Cloonan, said the family wanted to speak out so the shooter "can see what you've done to this family."

Aiden's mother "was merging to the right side to get away from this person," he said. "And as you can see, if you go online and look at the photos, there's one bullet shot in the trunk that went through the trunk and right through my nephew. So you tell it was a cowardly way of doing it because they shot her in the back."

According to relatives, the boy's mother was driving Aiden to kindergarten when the shooting occurred.

The CHP closed the northbound side of the freeway for several hours to search for clues.

Olivera said investigators are hoping to hear from witnesses, especially those whose vehicles are equipped with a dashcam camera. "Even if you think it wasn't anything big, call us," he said. "We'd like to hear from you."

Anyone with information that may be helpful to investigators is asked to call CHP Officer Kevin Futrell at 714-567-6000.