Rallies held across North Texas in support of Ukraine

From Fort Worth to The Colony, rallies across North Texas on Sunday showed support for Ukraine.

THE COLONY, Texas - From Fort Worth to The Colony, rallies across North Texas on Sunday showed support for Ukraine.

People brought signs and flags to stand on the Tarrant County courthouse steps.

Nataliia Hays was emotional from the turnout.

"All the support, we are asking the world to hear. Our families are there, and we can’t do nothing," she said.

Hays’ family is sheltering at a subway station and running low on food and money after four days underground.

His daughter attends school in Ukraine, and now, her classmates’ lives are in danger.

"I would crawl on the ground," Head said. "I would fight the Russians with my bare hands to get to her."

Sergiy Mitsymskyy, of McKinney, said his loved ones in Ukraine are volunteering to fight.

"Whoever can hold a firearm. they are staying and defending Kyiv," he said.

Outside St. Sophia Ukrainian Catholic Church in The Colony Sunday morning, members of its congregation prayed for financial and humanitarian help.

"Ukrainians are strong, they are willing to fight," said Irina Shevchuk, who has family in Ukraine.

But many in the crowds are concerned the war will only get worse. 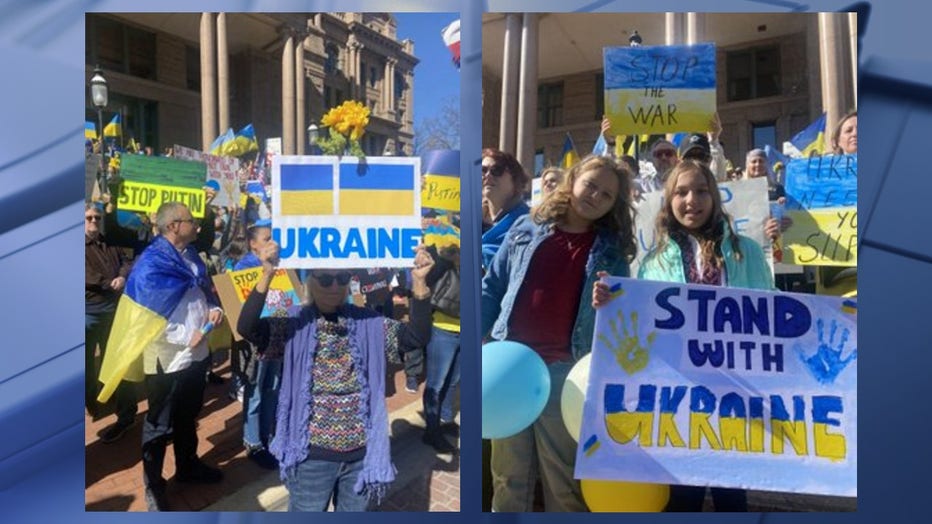 "Everything he has done is unpredictable. I can’t say his further steps or what he is going to do, but I do know all these people here are supporting the innocent citizens of Ukraine," said Alina Durham, who has family in Ukraine.

FOX 4 has been following Tom Sanchez, an attorney from Irving living in Kyiv, Ukraine.

This weekend, he fled west by train, but an eight-hour trip to Lviv turned into a 17-hour trip.

"From what I could tell, they were re-routing the train because they were trying to stay away from possible danger," Sanchez said.

Now, Sanchez is waiting for the next safe move, and is worried about his friends he left behind.

"Every time they come up for air, they send me a note," he said.

Durham is constantly checking her phone for updates in Ukraine.

She sent her family in Kharkiv photos of Sunday’s rally, looking for any chance to spark hope.

"They need help. They do not have a voice right now," she said.

There is another rally set for Monday at the Texas State Capitol.

In Dallas, the Ukrainian Cultural Club is taking monetary donations, as well as any medical supplies they can send to Poland and then across the border to Ukraine.