Four were for disturbance calls, three of those were in April and the most recent was four days before the shooting.

We're also learning new details about the knife police say Ashton Pinke was armed with and the club or stick when he came at officers.

The family provided a short clip of video to FOX 4 leading up to the shooting. They say Pinke was having a mental health issue and also question where the knife was. 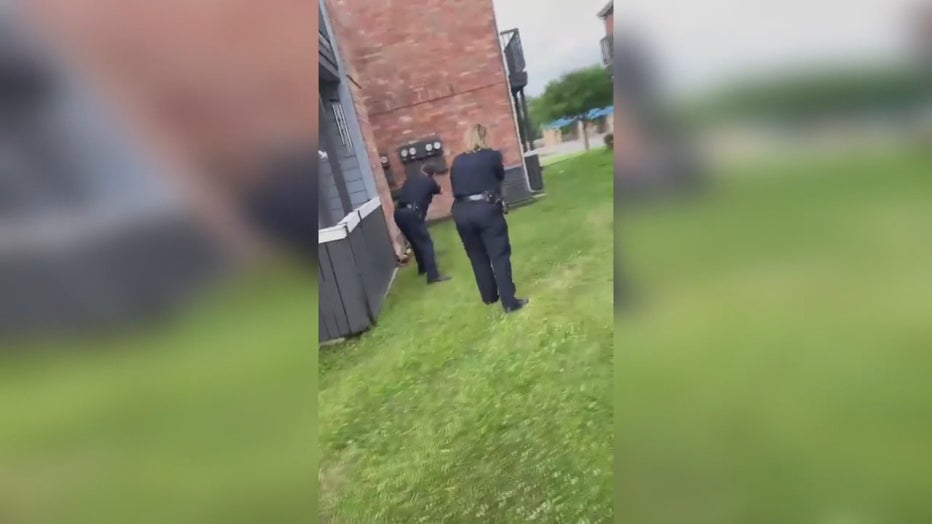 The department maintains the 27-year-old had a knife in hand when he charged toward two officers who shot and killed him while responding to a domestic violence investigation Tuesday morning.

Pinke's girlfriend called 911. Police say it sounded like an assault and that she told them Pinke had a knife. Then, the call dropped.

The girlfriend recorded 11 seconds of video leading up to the shooting. In it, you repeatedly hear the two officers saying, "Don’t do it!" While Pinke was backed into a corner, then he charged at officers.

The couple's 1-year-old child was also with her behind officers.

"He came aggressively at officers with not only a knife but what also appears to be a club in his hands," said Mesquite Police Lt. Stephen Biggs.

Pinke’s family members question if he had a knife. The video they provided to FOX 4, but not to police, appears to show Pinke with both hands on a club, which they describe as a walking stick.

The video is unclear, but police say the knife was in Pinke’s hand while also holding the club. They say the knife is now evidence. The investigation into the officers using deadly force is ongoing and could take some time.

"Not only officer-involved shootings, but investigations in general can take weeks, months," Biggs said.

Police, however, say this was not a welfare check but a domestic violence investigation.

"The original call, when we got it, we heard screaming," Biggs said.

Court documents show Pinke had previously been convicted of assault in 2012 and a weapons charge in 2016. Last year, he was charged with three counts of injury to a child.

FOX 4 obtained public records Wednesday revealed officers have been dispatched to Pinke’s apartment five times throughout the past year, including four disturbance calls. However, each time, officers determined no report needed to be made.

"They both have consistent stories. Nobody pushed. Nobody hit," Biggs said. "It’s an N-0. It’s a ‘no offense.’"

Mesquite police say it’s unclear if the officers involved Tuesday had been out to Pinke’s apartment before or have a history with him. The male and female officer have been with the department for more than 20 years.

The department plans to release the initial 911 call, body camera footage and more later this week.