Protests are being held across the country Wednesday night, including here in Dallas and Fort Worth, following a grand jury's decision not to charge any officers for Breonna Taylor's death.

DALLAS - Protests are being held across the country Wednesday night, including here in Dallas and Fort Worth, following a grand jury's decision not to charge any officers for Breonna Taylor's death.

Activists in Dallas said this is not about Black people versus police, but rather the sanctity of life and the ability to move around freely, or be safe at home, without fear of being killed by the people who are meant to protect everyone.

There were more calls of “no justice, no peace” in Dallas Wednesday night, as protesters gathered outside DPD police headquarters and city hall to voice the outrage that they feel, once again, justice has not been served. 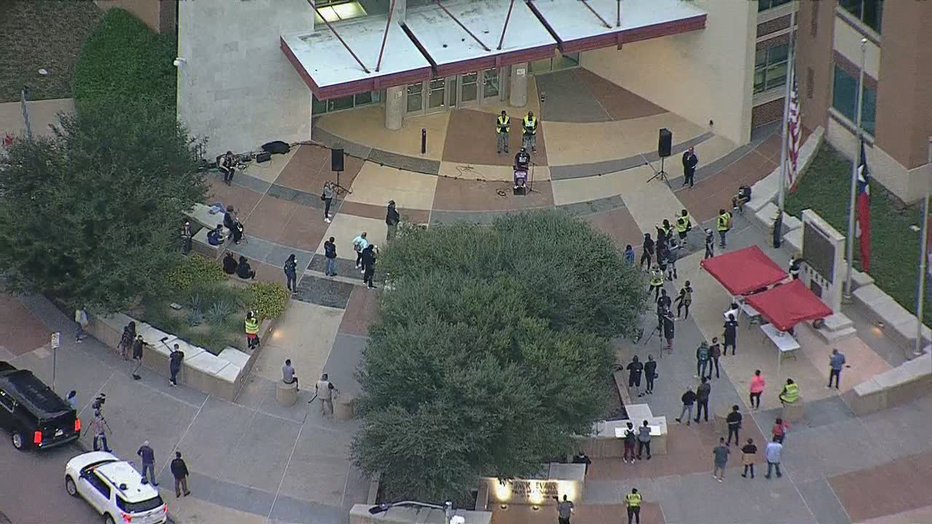 Protesters outside Dallas PD headquarters after no officers were charged for the death of Breonna Taylor.

“And so, here we are again. A young, beautiful black woman just starting adulthood, one of our heroes, a frontline worker, at home, in her bed, where all of us should feel safe, killed by the police,” Enobakhare said.

No Louisville officers were charged in the police shooting death of Breonna Taylor.

A grand jury indicted one officer, Brett Hankison, on three counts of wanton endangerment for firing into neighboring apartments.

The news comes one year to the day that the Amber Guyger trial started in Dallas for the murder of Botham Jean.

“We were happy that we got a murder conviction of Amber Guyger, but in this case, in Breonna Taylor’s case, no one is charged with her murder,” Berry said. “I was shocked. I see the death of Breonna as a tragedy, it was a great tragedy, so the non-indictment of the officers [in her death] is a tragedy.”

To him, the death of George Floyd this summer, and now the lack of an indictment in Taylor’s death means that nothing has changed.

Berry urges non-violence and no rioting, but understands why people are protesting.

“Since the time of George Floyd, the community has said, ‘Hey, we have lost hope in people in political power, in our local government, federal government, in our police departments.’ And that’s why people are taking to the streets,” Berry said.