President Trump supporters camp out ahead of Thursday’s Dallas rally

Supporters of President Donald Trump are camped out at the American Airlines Center in Dallas in advance of Thursday’s campaign rally.

DALLAS - Supporters of President Donald Trump are camped out at the American Airlines Center in Dallas in advance of Thursday’s campaign rally.

More than two dozen have set up tents. Many of them travel from event-to-event across the country.

The rally kicks off at 7 p.m. Thursday, but doors open at 4 p.m. Attendees are asked to register online. But beyond that, it's first come, first served. People camped out are determined to get the best seats in the house.

“I've seen the rallies on TV, and he's drawing in tens of thousands of people,” she said. “And I wanted to make sure there was a chance for me to get in the doors. it's once in a lifetime opportunity.”

But for many others, this isn't their first rodeo.

“These are folks who go from city-to-city with us and so they are first in,” said Erin Perrine, the deputy communications director for the Trump Campaign. “They make sure they get in because we always fill the arena.”

It's Blake Marnell's sixth Trump rally. He made the trip from San Diego. 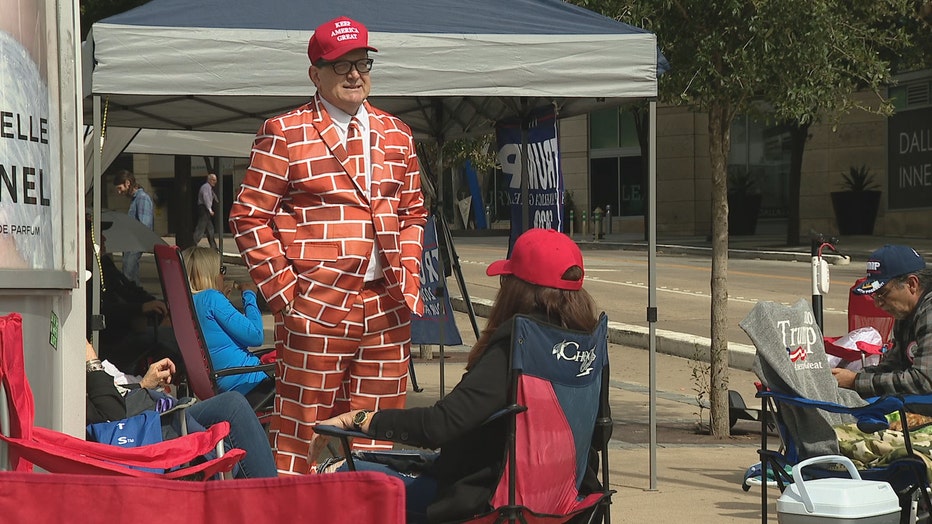 Attendees need to register online, but organizers say that doesn't guarantee getting in. Entrance is first come, first served. Clear bags are recommended. Large bags are not allowed.

Expect traffic delays near the arena. Olive Street and All-Star Way will close at 9 a.m. Thursday. Houston Street and Victory Avenue will close starting at 5 p.m.

This visit, President Trump is the incumbent seeking reelection. He's also in the middle of an impeachment inquiry. But his supporters say he's already earned their vote and plan to celebrate their candidate.

“I hope that he comes out and does his thing,” Hassenteufel said. “He's kind of off-script and that's what I love about him.”

“And if you can't get in, there will still be a massive party outside,” Perrine said.

Trump Campaign Manager Brad Parscale made a stop in Northeast Dallas Wednesday night and spoke with supporters about boots on the ground efforts to drum up support.

There are questions about whether Texas could be a battleground state in 2020.

Matthew Wilson teaches political science at SMU. He doesn’t believe Texas will tip the scales for the president, but a heavy campaign presence in the Lone Star State could have other benefits.

“The reality is if Donald trump loses Texas in 2020, it probably means he’s losing everywhere,” Wilson said. “It’s highly unlikely Texas will determine the outcome of the presidential election. That being said, there’s a lot of money to be raised in Texas.”

Trump is also facing bipartisan criticism over his decision to pull U.S. troops out of Syria. While he’ll likely address some of those topics during his rally, expect a focus on some Texas-specific issues.

“He’ll want to trumpet the economic growth that has taken place in Texas, the very favorable economic climate here in this state, as well as his initiatives on immigration and his stance on the second amendment,” Wilson said.

Beto O'Rourke will be holding a counter rally Thursday in Grand Prairie at 6 p.m. He's calling it a ‘rally against fear.’