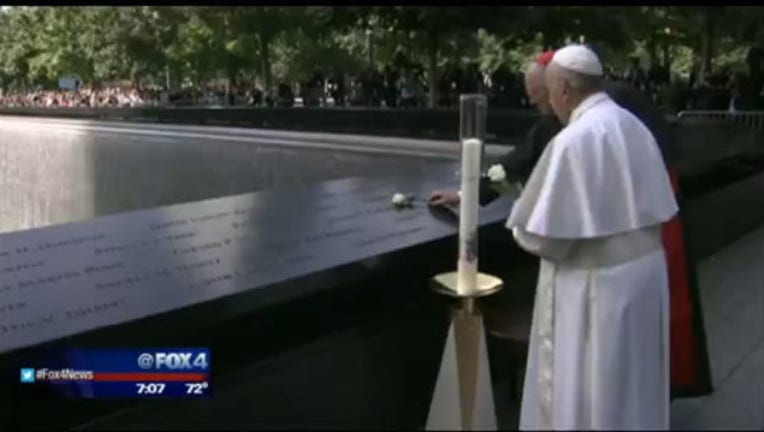 PHILADELPHIA (AP) — Pope Francis arrived in the City of Brotherly Love on Saturday for the final leg of his U.S. visit — a festive weekend devoted to celebrating Catholic families.

The pontiff's plane touched down at the Philadelphia airport after takeoff from New York, bringing him to a city of blocked-off streets, sidewalks lined with portable potties, and checkpoints manned by police, National Guardsmen and border agents.

After speeches to Congress and the United Nations earlier this week aimed at spurring world leaders toward bold action on immigration and the environment, he is expected to focus more heavily on ordinary Catholics during his two days in Philadelphia.

From the airport, Francis rode by motorcade to the downtown Cathedral Basilica of Sts. Peter and Paul to celebrate a Mass for about 1,600 people, twice turning around to wave to the hundreds of cheering people standing outside the church.

Also on the itinerary for Saturday: a late-afternoon speech in front of Independence Hall on religious freedom and immigration. The weekend's events will culminate in an outdoor Mass Sunday evening for 1 million people.

Among those greeting Francis at the airport was Richard Bowes, a former Philadelphia police officer wounded in the line of duty seven years ago. Francis also got out of his black Fiat to bless a man in a wheelchair on the tarmac, kissing him on the forehead.

On the first two legs of his six-day U.S. journey, in Washington and New York, Francis was greeted by throngs of cheering, weeping well-wishers hoping for a glance or a touch from the wildly popular spiritual leader, despite unprecedented security.

The Philadelphia visit, months in the making, all but paralyzed Center City, with stretches of Broad and Market Streets and other routes closed to all but pedestrians and lined with metal crowd-control barricades, massive concrete blocks and tall fences.

"He has a magnetic personality that not only appeals to Catholics, but to the universal masses. He's not scripted. He's relatable. His heart, in itself, you can see that reflected through his message," said Filipina Opena, 46, a Catholic from LaMirada, California, as tour groups and families walked among Philadelphia's historic sites ahead of the pope's visit. "People feel he's sincere and he's genuine."

In Philadelphia, Francis will be the star attraction at the World Meeting of Families, a conference for more than 18,000 people from around the world.

An Argentine on the first U.S. visit of his life, the 78-year-old Francis will be given a stage steeped in American history. Independence Hall was where the Founding Fathers signed the Declaration of Independence and Constitution. Francis was scheduled to speak from the lectern Abraham Lincoln used to deliver the Gettysburg Address.

As he has done in New York and Washington, the pontiff will give his attention to both the elite and the disadvantaged, this time visiting inmates in Philadelphia's largest jail.

On Saturday night, on Benjamin Franklin Parkway, the cultural heart of the city, he was be serenaded by Aretha Franklin and other performers at the festival celebrating families. He will return there Sunday for the Mass, his last major event before leaving that night for Rome.

"It's probably not politicians who will remember his message but the kids," said Liza Stephens, 48, of Sacramento, California, who was in Philadelphia with her two daughters, ages 10 and 12. The three spent time volunteering to bag food for Africa, among other activities at the family conference.

The Archdiocese of Philadelphia organized the conference, hoping for a badly needed infusion of papal joy and enthusiasm amid shrinking membership, financial troubles and one of the worst clergy sex-abuse scandals to hit a U.S. diocese.

The archdiocese has been the target of three grand jury investigations. The last grand jury accused the diocese in 2011, before Archbishop Charles Chaput came to Philadelphia, of keeping on assignment more than three dozen priests facing serious abuse accusations.

A monsignor who oversaw priest assignments was found guilty of child endangerment, becoming the first American church official convicted of a crime for failing to stop abusers.

The pope is widely expected to talk privately with abuse victims this weekend.

The visit is also shaping up as one of the most interesting ecclesial pairings of the pope's trip. His host is Chaput, an outspoken opponent of abortion and gay marriage who takes a hard line on church teaching in the archdiocese.

Chaput has said a local Catholic school run by nuns showed "character and common sense" by firing a teacher in June who married another woman. He recently wrote in the archdiocese newspaper that abortion is "a uniquely wicked act" that cannot be seen as one sin among many.

Three days ago, in an address to U.S. bishops laying out his vision for American Catholicism, Francis said attention should be paid to the "innocent victim of abortion" but listed the issue as one among many "essential" to the church's mission, including caring for the elderly and the environment.

Chaput has rejected the idea that he is in conflict with the social justice-minded pope, calling it a narrative invented by the media and pointing to the millions of dollars the archdiocese spends each year to help the poor and sick. The pope will be staying at the seminary where Chaput lives.

Lesbian, gay, bisexual and transgender Catholics plan to hold separate events, including one for gay parents and their children, in a push for more acceptance in the church. Francis has famously said, "Who am I to judge?" when asked about a supposedly gay priest, but has also affirmed church teaching on marriage.

Mary McGuiness, a religion professor at La Salle University, a Catholic school in Philadelphia, said she doesn't anticipate a flood of local Catholics returning to Sunday Mass because of the pope's visit. She said the archdiocese has been through too much with abuse scandals and parish closings.

She said the intense attention to his speeches here could inspire people to "begin to think more about what Catholicism really means."

Zoll reported from New York. Contributing to this report were Associated Press writers Nicole Winfield in New York and Kathy Matheson and Maryclaire Dale in Philadelphia.