Several Oak Cliff homeowners are reporting home invasions, and they believe the same group of crooks is responsible.

DALLAS - Several Oak Cliff homeowners are reporting home invasions, and they believe the same group of crooks is responsible.

This started off as one mother’s post to social media about a home break-in.

A home break-in was caught on camera in Oak Cliff on December 16, when burglars took whatever they could carry.

"And some guy just came up from behind me," a 26-year-old pregnant mother recalled.

She said a group of men broke through her child’s bedroom window.

"I have never been in a position like that before," she said.

She doesn’t want to reveal her name or face. She wasn’t home at the beginning of the break-in, but came home toward the end and met one burglar face-to-face in her driveway.

"And he had a gun and he started to threaten me…If I didn’t stop crying, he was going to shoot me," she said. "And I didn’t even know at the time that anyone was in my home. I thought that maybe he was trying to just rob me outside of my car…And then I seen that the house was trashed, so I thought that maybe they were still in the house."

She shared surveillance footage on social media and it caught Monica Mejia’s attention.

She believed it might be the same group that broke into her family’s nearby Oak Cliff home through a back window on Thursday.

"You know it’s going to catch up to them," Mejia added. "Everything that we do in this world, it has a consequence."

She has footage of them leaving. She wasn’t home during the break-in, but remembers what it felt like to realize cash, jewelry, and other items were stolen.

"Like, they took the clothes out, the drawers, everything was just everywhere," she recalled. "I started crying. I started panicking. And I went straight to my mom’s room to look for the safe, if it was still there, and it wasn’t there."

FOX 4 spoke with another Oak Cliff resident who, after seeing these posts on social media, shared photos of thieves who broke into her home Monday. They were carrying guns. The initial victim believes one of those guns was stolen from her home. 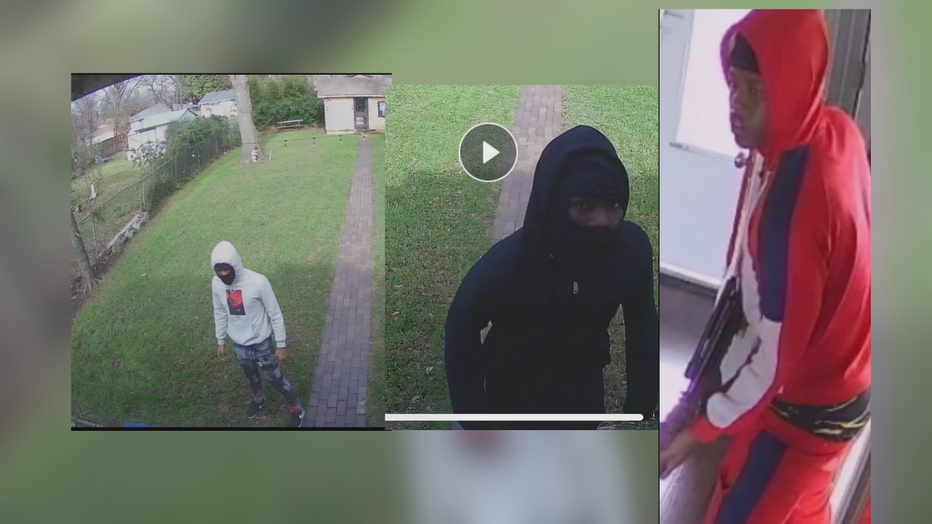 "These guys are freely doing it to anybody and everybody, and nothing’s being done about it," she said.

FOX 4 reached out to Dallas police to see what possible connections there might be, or if they have leads or suspects, but haven’t heard back.

For now, these families are sharing their stories to warn others to be on the lookout.

"You know, someone’s going to end up losing their life over this," the victim said.

All the victims said they have filed police reports and shared their images with police.