Ice knocks out power for thousands in Texas

So far, the Texas power grid is holding up. But that's little comfort to the nearly 21,000 customers who are without power due to the ice bringing down power lines. FOX 4's Brandon Todd has the latest.

DALLAS - Around 21,000 of Oncor's 3.8 million customers are without power Thursday morning because of the icy weather.

Most are in north and northeast Texas including more than 5,000 homes and businesses so far in Collin County. An additional 2,400 are in Dallas County, 2,100 in Tarrant County and a handful in Denton County.

Many North Texans have been having anxiety all week because of the power grid failing last year.

This time, Gov. Greg Abbott and energy officials say they are more prepared.

Oncor, which handles the delivery of power in North Texas, said the greatest concern overnight into Thursday is ice on trees and power lines.

How long we stick with freezing rain and how quickly it transitions to sleet and snow will make a huge difference in whether people lose power.

Oncor has crews staged around the metroplex and as far west as Odessa and as far east as Tyler. 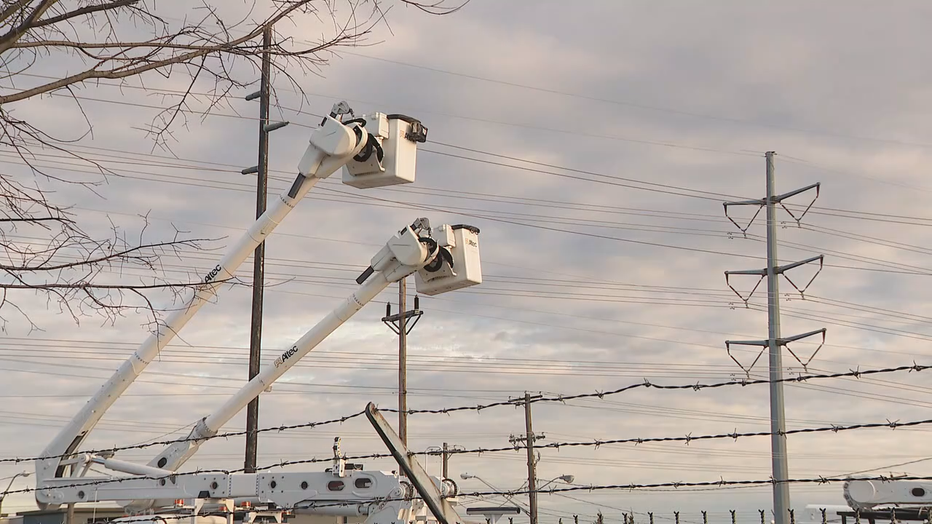 What to Expect: Ice, sleet and snow in the forecast for DFW

More than 1,500 workers have also come in from Missouri, the Carolinas and the gulf states, including Florida.

"We are closely monitoring the situation when it comes to ice because ice can just be so impactful when it comes to the power grid," said Oncor meteorologist Jen Myers. "If there are outages, we've got those crews pre-positioned all across the state to make sure that if we do see outages, we're ready to go."

ERCOT said North Texas will reach a peak for energy demand on Friday morning, but it assured the public there will be excess energy even during peak demand.

Gov. Abbott on Tuesday said he can’t guarantee power won’t be shut off on purpose in some places but said any likely outages will be a direct result of the weather.

"Ice on power lines is something that we're concerned about. But we're also really concerned about is ice on trees as well. You get a light glazing of ice, even a tenth of an inch of ice on a tree, and it can add hundreds, literally hundreds of pounds of extra weight to a tree, which makes those branches sag. And if there's wind, that wind can break off a branch and fortunately cause issues," Myers said. "Really, the most important part is the temperature. That's going to make all the difference in the world. One degree temperature difference is the difference between a quarter of an inch of ice and inches of snow or a quarter of an inch of rain."

Oncor says the greatest concern overnight into Thursday is ice on trees and power lines. How long we stick with freezing rain and how quickly it transitions to sleet and snow will make a huge difference in whether people lose power.

As for the power grid, ERCOT says nearly all power plants that were required to pass weatherization inspections were able to.

The oil and gas industry did not have to meet weatherization requirements this year.

ERCOT, which doesn’t regulate the gas industry, said one pipeline company that will not deliver as much gas as expected. This will impact the north Texas area.

But in a worst-case scenario, it would amount to just a fraction of the available energy in the state.