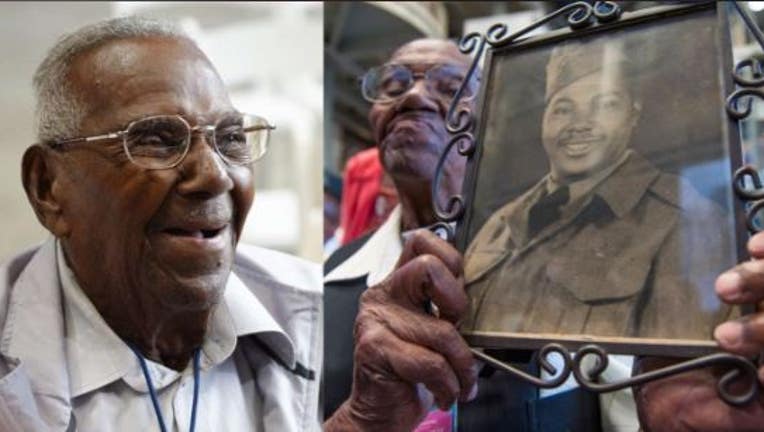 Born Sept. 12, 1909, Lawrence Brooks served in the predominantly African-American 91st Engineer Battalion, which was stationed in New Guinea and then the Philippines during World War II. (Photo Credit: Courtesy of The National WWII Museum)

Lawrence N. Brooks, the oldest World War II veteran in the U.S. — and believed to be the oldest man in the country — died on Wednesday at the age of 112.

His death was announced by the National World War II Museum and confirmed by his daughter.

"The National WWII Museum is deeply saddened by the loss of beloved WWII veteran Mr. Lawrence Brooks, who passed away this morning.  At 112 years old, he was the oldest surviving WWII veteran in the country," the WWII Museum tweeted Wednesday.

The WWII Museum added "More than that, he was a dear friend, who celebrated his birthday with us every year starting in 2014, when he was just a spry 105-year-old.  His consistent advice when asked for the secret behind his longevity was, "Serve God, and be nice to people."

Most African Americans serving in the segregated U.S. armed forces at the beginning of World War II were assigned to noncombat units and relegated to service duties, such as supply, maintenance and transportation, said Col. Pete Crean, vice president of education and access at the National WWII Museum.

"The reason for that was outright racism — there’s no other way to characterize it," Crean said. 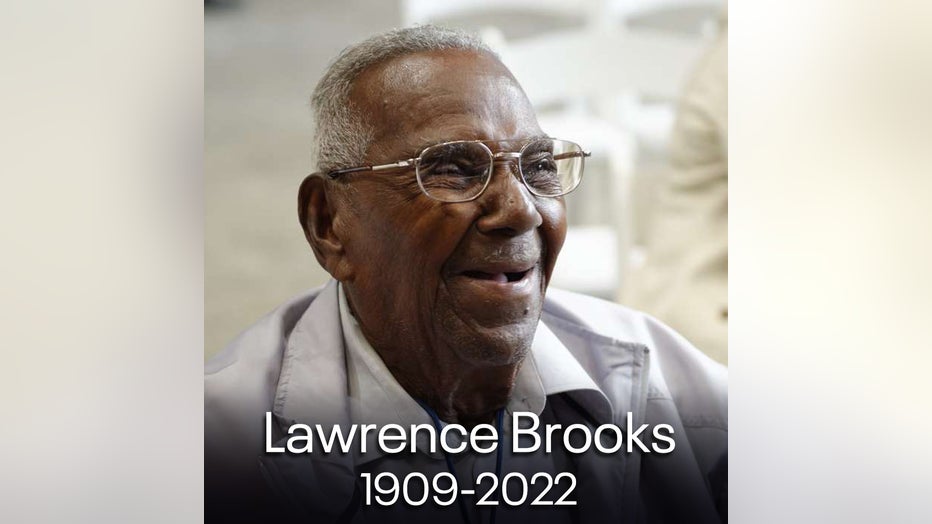 But Brooks, born on Sept. 12, 1909, was known for his good-natured sense of humor, positivity and kindness. When asked for his secret to a long life, he often said, "serving God and being nice to people."

"I don’t have no hard feelings toward nobody," he said during a 2014 oral history interview with the National WWII Museum in New Orleans. "I just want everything to be lovely, to come out right. I want people to have fun and enjoy themselves — be happy and not sad."

On sunny days, Brooks was known for sitting on the front porch of the double shotgun house he shared with daughter Vanessa Brooks in the Central City neighborhood of New Orleans. Neighbors would call out to the local celebrity, wave and bring him soda and snacks.

Brooks was passionate about the New Orleans Saints football team and never missed a game, his daughter said. His church, St. Luke’s Episcopal, was also close to his heart and he never missed a Sunday service until the coronavirus pandemic hit.

Originally from Norwood, Louisiana, near Baton Rouge, Brooks' family moved to the Mississippi Delta when he was an infant. He was one of 15 children. He said lived too far from the nearest school for him to attend, so his parents taught him what they could at home.

Brooks was working at a sawmill when he was drafted into the U.S. Army in 1940. After Japan's attack on Pearl Harbor, he was assigned to the mostly Black 91st Engineer General Service Regiment stationed in Australia.

Later in the war, troop losses virtually forced the military to begin placing more African American troops into combat positions. In 1941, fewer than 4,000 African Americans were serving in the military. By 1945, that number increased to more than 1.2 million.

The 91st, where Brooks served, was an Army unit that built bridges, roads and airstrips for planes. Brooks was assigned as a caretaker to three white officers. His job was to cook, drive and take care of their clothes.

Crean, who got to know Brooks and his family through his work at the WWII Museum, said Brooks talked about noticing how much better he was treated as a Black man in Australia compared with the U.S. But Brooks told Crean thinking about it would make him angry, and he tried not to.

During his 2014 oral history interview with the museum, Brooks said the officers he cared for treated him well and he considered himself fortunate not to have to fight in combat.

He often told the story about a time during the war when he was a passenger in a C-47 aircraft delivering a load of barbed wire to the front when one of the transport plane’s engines went out.

After they dumped the cargo to conserve weight, he made his way to the cockpit. He told the pilot and co-pilot that since they were the only two with parachutes, if they had to jump for it, he was going to grab on to one of them.

"We made it, though," he said during the 2014 oral history interview, laughing. "We had a big laugh about that."

Despite not being in combat, Brooks did experience enemy fire during the war. He said the Japanese would sometimes bomb Owen Island, where he worked. He said he learned to tell the difference between the sounds of Japanese, American and German planes approaching.

"We’d be running like crazy, trying to hide," he said. They had to dig foxholes to protect themselves.
He was discharged from the Army in August 1945 as a private first class.

When he returned from service, he worked as a forklift driver until retiring in his 60s. He has five children, five stepchildren, and dozens of grandchildren and great-grandchildren. He lost his wife, Leona, shortly after Hurricane Katrina.

That 2005 disaster destroyed his home. Then in his late 90s, he was evacuated from his home’s roof via helicopter. His daughter described him as "resilient."

"He’s been through a lot. He’s real tough, and that’s one thing I learned from him. If nothing else, he instilled in me, ‘Do your best and whatever you can’t do, it don’t make no sense to worry about it,’" she told the AP. "I think that’s why he has lived as long as he has."

Starting with his 105th birthday, the National WWII Museum began throwing him annual birthday parties. His favorite part of the celebration was watching the Victory Belles, a trio performing the music of the 1940s.

During the coronavirus pandemic in 2020 and 2021, the museum organized a parade in front of his home with brass bands and Krewe of Zulu warriors in full regalia.