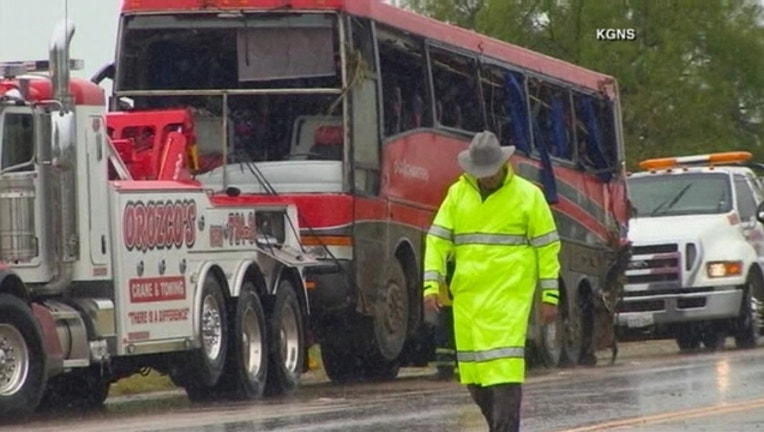 LAREDO, Texas (AP) — A charter bus headed to a casino crashed in far South Texas on Saturday, killing eight people and injuring about 40 in a one-vehicle rollover, officials said.

Webb County Volunteer Fire Department Chief Ricardo Rangel says the bus, identified as belonging to OGA Charters, originated in the Rio Grande Valley and was headed to a casino in Eagle Pass, about 125 miles northwest of Laredo. The bus company is based in San Juan in Hidalgo County. A message left at the bus company Saturday was not immediately returned.

The fire department described the crash as a rollover involving just one vehicle. Firefighters received the call late Saturday morning. Victims were taken to at least three hospitals.

Priscilla Salinas, a spokeswoman for Laredo Medical Center, said some passengers from the bus being treated at that hospital were in stable condition. She was unable to say how many victims were at the hospital and said that was all the information she could share. The bus passengers began arriving by ambulance by about noon, she said.

By late afternoon, the highway at the scene remained closed. Laredo about 150 miles southwest of San Antonio.

The crash is one of the deadliest bus accidents in Texas in the last several years, including one in January 2015 when two prison guards and eight inmates were killed after their prison bus struck a piece of displaced highway guardrail west of Odessa. The bus fell about 20 feet before striking a Union Pacific freight train that happened to be passing beneath the highway.

Seventeen passengers died in 2008 near Sherman when their bus plunged over a highway bridge on their way to a religious retreat in Missouri. The National Transportation Safety Board concluded the crash was caused when a retreaded tire on the right front axle was punctured by an unknown object.

Although the retread itself wasn't the cause, the panel noted that the tire was affixed to the front axle illegally, the bus company didn't have the authority to leave Texas after failing an inspection three months earlier, and the company that inspected the bus wasn't equipped to judge whether it was roadworthy. The owner of the Houston bus company was charged with making false statements but avoided prison in 2014 after a federal judge sentenced him to three years of probation in a plea agreement.