Family gets a happy surprise after enduring Texas winter storm.

A North Texas family that was among thousands experiencing power and water problems during the winter storm got help from 1,500 miles away.

Ezell Holley left his home in Irving when the electricity went out.
The 91-year-old went to his son, Glen's, home in North Dallas, but it also had no power.

Building fires could not cut it, so they looked for a hotel with the help of Ezell's granddaughter, who is an anchor at FOX 4’s sister station in Philadelphia.

"I woke up in bed, cold. So I dressed and went down to turn on the fireplace, I had no wood, so I was trying to warm myself by the ignition flame. That was not helping," Ezell recalled when he first lost power.

"Of course, I was born and raised in Dallas, but being here in Philly, you get used to snow," Ezell’s granddaughter, FOX 29 Philadelphia Good Day anchor Alex Holley, said. "So at first, I was like, you’re going to have to deal with what we deal with all the time, but then it started to take a scary turn. And when my grandfather lost power, I was worried about my dad driving to go get him, and then by the fact that they came back to my dad’s house, and they didn’t have power, then I really started to worry."

Ezell said they built a fire at his son’s house, and they sat by the fire place for the next day, but Alex was trying to help them from Philly, and was making calls during commercial breaks of her show to check on getting a hotel for them.

She was able to get them a hotel the next morning, and Ezell said being warm in the hotel made him feel like he was in the greatest spot.

It became a running joke within the family that they were staying at the Waldorf Astoria.

Alex was posting her family’s story on social media to raise awareness about what was going on across the state, and was surprised to see she got a direct message from Rome Cavalieri, a Waldorf Astoria Hotel in Rome.

"We were all pretty shocked," Alex said. "And they were like, ‘Hey, we appreciate what y’all are doing, trying to make light in a terrible situation. Why don’t you come to the real Waldorf?’" 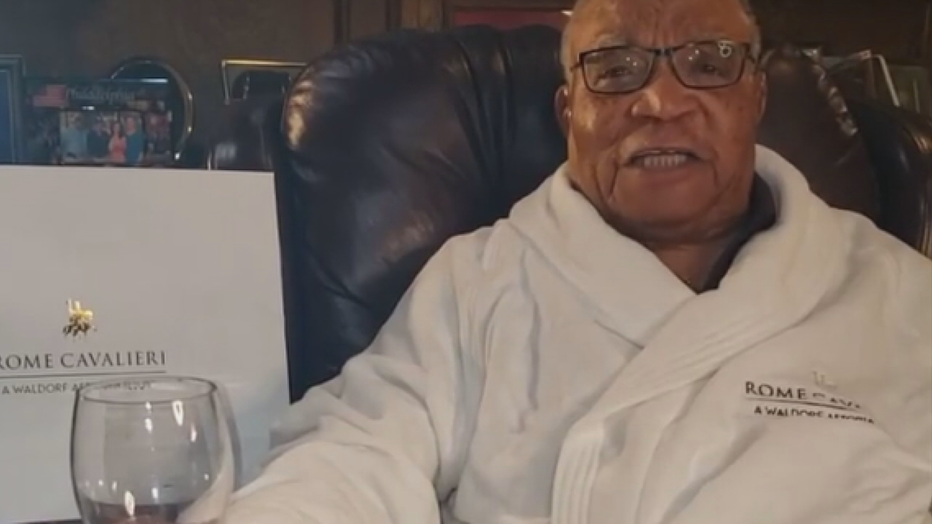 So they sent Ezell a care package with a robe and some chocolates, and they are picking up the tab for him and one other person to fly to Rome and stay at the Rome Cavalieri.

"I had no idea that they would hear about little, old me at that time. I’d say, man, this is something. I was just flabbergasted," Ezell said.