Churchgoers packed the pews at Cathedral Guadalupe during noon mass Friday, praying for peace and an end to war.

DALLAS - Catholics around the world joined Pope Francis in the act of consecration to pray for peace in Ukraine and Russia.

The pope recently spoke out against any increase of military involvement, including western allies, and urged people to find other paths to peace.

Churchgoers packed the pews at Cathedral Guadalupe during noon mass Friday, praying for peace and an end to war.

"I’m scared, but God has been helping me with the help of the Holy Spirit, to be able to be there as well," Francisco Moran said.

For the past seven years, Moran has been studying as a seminarian in central Ukraine.

Friday, he was back home in Texas, leading a decade of the Rosary in Ukrainian.

The act of consecration happened at the Cathedral Guadalupe in Downtown Dallas, along with other catholic churches around the world, following Pope Francis’ call for peace between Ukrainians and Russians. 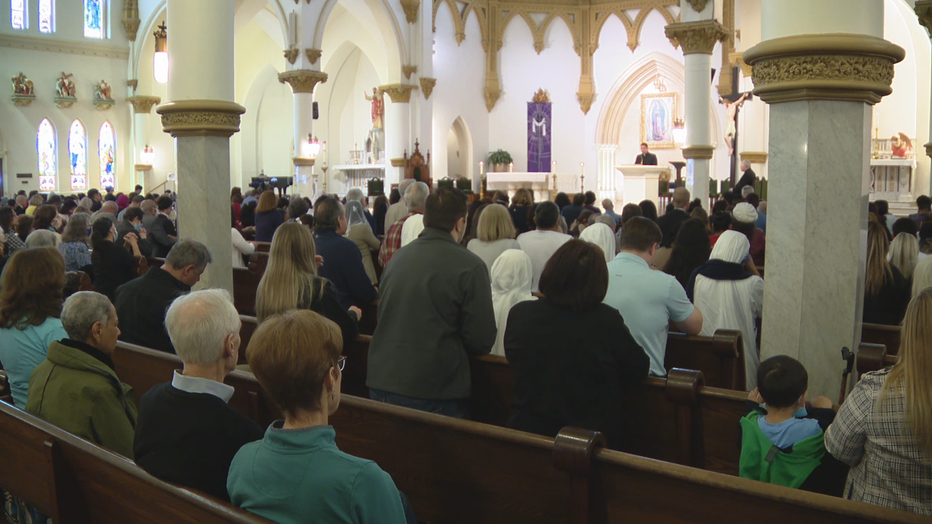 "To ask the prince of peace to govern this whole situation that we see in Ukraine, and in particular, for us to bind ourselves close with our brothers and sisters in Ukraine who are suffering," Catholic Diocese of Dallas Bishop Edward Burns said.

The seminary where Moran studies is three hours away from Kyiv.

He said the airport nearby and an area on the same street as his seminary have been bombed.

"When I hear the sirens go off every two, three hours, I look at the skies. Each city has a curfew as well, in Venezia, the curfew is from 10 p.m. to 7 a.m., so you cannot be out in the streets and you have to have your documents with you at all times," he explained.

And his friends in other parts of Ukraine are dealing with worse.

At the same time, Refugee Services of Texas are preparing to receive up to 5,000 Ukrainian refugees resettling in Texas.

"Would say that we're really prepared at this point, because of the influx of Afghans that we've gotten recently," said Ashley Faye who is senior director of development for Refugee Services of Texas. "So we've really had to ramp up quickly. And we have a lot of volunteers and are in the midst of still setting up a lot of apartments."

The organization is accepting monetary donations and supplies on their Amazon wishlist to help with resettlement. They also welcome volunteers to help.

Keeping the spirits of Ukrainians up to help them get through a dark time back home.

"It was our Lord Jesus Christ who said, blessed are the peacemakers," Burns said. "We’re answering that call to pray for our enemies and pray for their conversion."

It’s unclear when any refugees might arrive in Texas, but Refugee Services of Texas said they usually get about two weeks’ notice to find living arrangements for families.