Repair work was underway Monday at nearly half of the Dallas ISD campuses after they sustained water damage from burst pipes during last week's deep freeze.

DALLAS - Repair work was underway Monday at nearly half of the Dallas ISD campuses after they sustained water damage from burst pipes during last week's deep freeze.

District officials say the plan is to have schools open Wednesday for in-person learning. It blames the extensive damage at 113 of 250 campuses on the blackouts that failed to be rolling.

"We are very resilient. We have been through a tornado and we’ve been through setting up for COVID-19. I know from here our essential employees that want to and will, will have our campuses open Wednesday," said David Bates, Assistant Superintendent of Maintenance and Facilities.

The district has been working at lightning speed to get the water out so students can get back in.

Images show E.D. Walker Middle School was one of several filled with water after pipes burst. At Lincoln High School, walls are already replaced and now being painted. 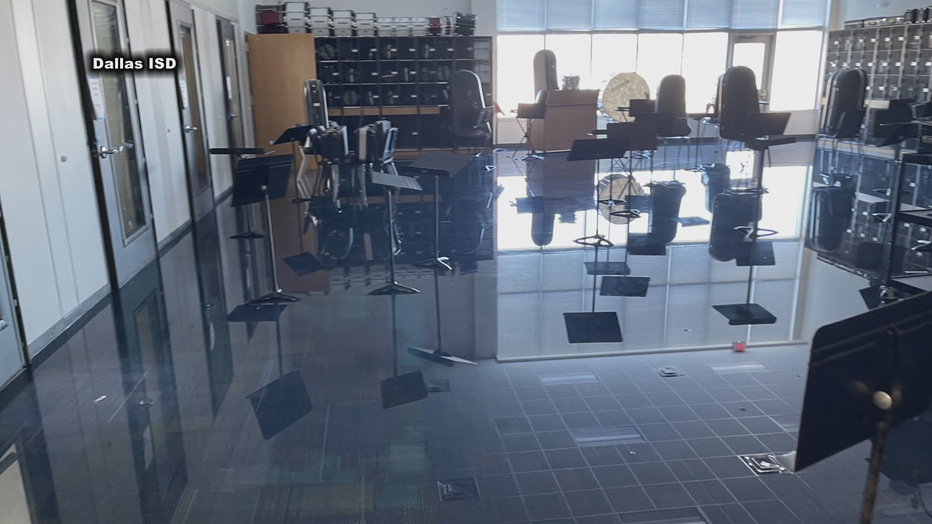 "Water mitigation had happened this weekend," Bates said. "I’m confident by the end of [Monday] we will have 75 percent of campuses fixed"

Bates put a finer point on how the blackouts affected the campuses.

"When it rolled on top of us 24-48 hours that is when it really hurt," he said. "When we could not heat pipes and keep above freezing that is really what did the most damage."

As the district remodels and builds new campuses, it may consider new ways to keep this from happening again.

"Taxpayers, thank God, they passed a $3.5 billion bond. We can look at different things for that type of climate we typically don’t look at," Bates said.

The damage from the winter storm will be in the millions compared with the hundreds of millions in damage from the October 2019 tornado. But in some ways the cleanup is more challenging because it is so widespread.

Dallas ISD says it will be able to fund the repairs through its rainy day fund. It is also filing claims with its insurance and FEMA.

School maintenance crews across North Texas are bailing water, tearing out sheet rock and pulling up carpets in dozens of schools that saw pipes burst during last week's storm. Most of our largest districts are still trying to get a handle on how badly they were hit.

Over in Northeast Dallas at Merriman Park Elementary, it was class as usual. The school is part of Richardson ISD.

A district spokesperson said several campuses sustained water-related damage from burst pipes the winter storm. But crews were able to make many repairs over the weekend. Parents are grateful for some normalcy.

Except for three, every school in Richardson ISD opened for in-person learning Monday. Classes at the three compromised campuses were held virtually.

Arlington ISD determined Monday that nine schools might not be able to reopen for in-person instruction by Thursday due to major flood damage or broken boilers.

Fort Worth ISD said most schools will return to normal operations on Wednesday. Only three campuses will not resume in-person instruction on Feb. 24:  Bonnie Brae Elementary, Westpark Elementary and Tanglewood Elementary. The schools will offer remote learning instead.