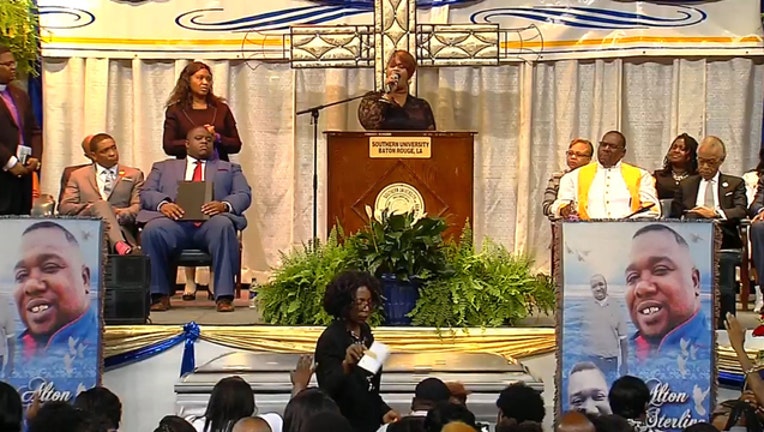 BATON ROUGE, La. (AP) — A steady stream of mourners filed past the casket of Alton Sterling, the 37-year-old black man who was shot to death by two white police officers as he was pinned to the pavement outside a convenience store.

The grieving paused Friday in front of Sterling's open casket, which was adorned with music notes and a smiling photo of the man. Sterling was selling CDs outside the store, as he had done for years, when he was killed by police responding to a call of a man threatening someone with a gun.

One mourner wore a T-shirt that said "No Justice, No Peace" on the back of it. Another carried a poster board sign saying: "Black America I'm Sorry!!"

Sterling's death was captured on cellphone video and circulated widely on the internet. His death, along with another fatal police shooting in Minnesota last week, sparked protests over the treatment of blacks by police.

Sterling's death heightened tensions in Baton Rouge, where about 200 protesters were arrested over the weekend, and police said they had foiled a credible threat to attack officers. Authorities said they discovered the plot after a pawn shop burglary, and one of the suspects was to appear in court Friday.

Among the mourners was Darrell Jupiter, a landscaper and close friend of Sterling's who came to the visitation inside the basketball arena at Southern University, a historically black college in north Baton Rouge.

"I just got my appetite back," said Jupiter, who had a tattoo on his arm with the words "RIP Alton." ''My best friend is gone. I have a big chunk missing. I'm lost."

He said he spent lots of time fishing and playing chess with Sterling, whose nickname was "Dweeb."

He said Sterling had begun to turn his CD selling into a steady way of making a living. He had set aside enough money to buy himself a car, Jupiter said.

Albert Carter, Sterling's 44-year-old half-brother, wore a tie with a grinning Alton on it. He said he hopes Sterling's death prompts police reform in Baton Rouge.

"We have a lot of terrible police out here," he said. "They harass."

He complained that at last weekend's protests a police officer pointed a gun at him and other protesters.

Sterling's funeral started with a gospel choir singing hymns, as many in the crowd of a couple thousand joined in.

Gary Chambers, a spokesman for the Sterling family and master of ceremonies for the funeral, said at the beginning that the event was intended to be a celebration of Sterling's life — not an opportunity for demonstrations about his death.

"If you want to protest please leave now," he told the crowd, which included two senior advisers to President Barack Obama.

Malik Bridgewater, 20, is scheduled to make his initial appearance in federal court on Friday. Police arrested Bridgewater and two other suspects on theft and burglary charges after eight handguns were stolen.

Bridgewater told investigators his motivation was to sell stolen items for cash, an agent from the Bureau of Alcohol, Tobacco, Firearms and Explosives wrote in an affidavit filed Thursday in federal court.

State and local law enforcement officials said during a news conference Tuesday that the stolen guns were part of a credible threat to harm police officers.

The first suspect arrested in the burglary — 17-year-old Antonio Thomas — told police that "the reason the burglary was being done was to harm police officers."

Baton Rouge Police Chief Carl Dabadie said threats like that justified an increased show of force at the demonstrations, as officers donned riot gear after starting with a mostly reserved, low profile.

Dabadie said Thomas didn't give any details about when or where a possible plot would be carried out.