There were a number of protests held across North Texas on Sunday, as people continue to to seek change in the wake of George Floyd's death.

DALLAS - There were a number of protests held across North Texas on Sunday, as people continue to to seek change in the wake of George Floyd's death.

This is the second week of protests in Dallas since Floyd's death.

On Saturday, thousands of people marched through Downtown Dallas.

A day later, protests continued in Dallas and other parts of the Metroplex.

In Dallas, protesters held a moment of silence outside the apartment complex where Botham Jean was killed in his apartment by former Dallas PD officer Amber Guyger in 2018.

A large group of healthcare professionals from across the Metroplex also took part in a "die-in" protest at the Trinity Skyline Trail.

There was a protest in South Dallas that was led by Dallas City Council members Adam Bazaldua, Adam Medrano, and Omar Narvaez.

Hundreds of people walked from Deep Ellum to Fair Park. 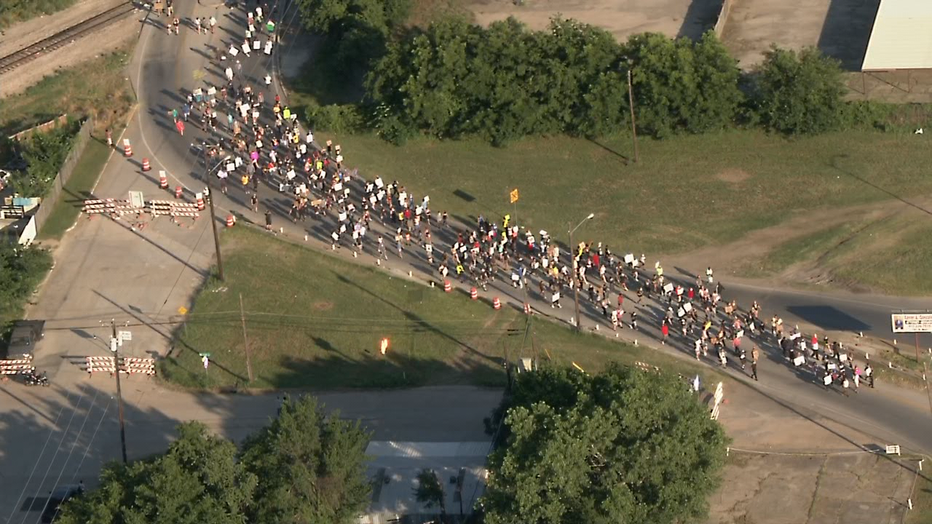 There was also a protest in McKinney Sunday to mark five years since a viral incident at a neighborhood pool.

In the summer of 2015, McKinney officers were trying to get a group teenagers to leave a pool party in the city's Craig Ranch subdivision.

During the response, an officer slammed a 15-year-old black girl to the ground and drew his weapon on other teens.

The whole incident was all caught on video.

But since the incident, many have demanded more police reform. They continued during protests this weekend.

The group United My Justice organized a march through downtown Fort Worth.

They began outside the old Tarrant courthouse and moved through Main Street.

All the protests throughout North Texas stayed peaceful.

Chapter presidents from groups across the area all gathered at Grand Prairie City Hall.

They spoke about how lawmakers can reform police policies, starting by outlawing the practice of placing a knee on a person's neck.

They also discussed ways to improve the relationship between law enforcement and people of color.