Thousands show up for peaceful protest in Downtown Dallas Saturday

Thousands of people showed up in Downtown Dallas Saturday afternoon as&nbsp;peaceful protests continued over the death of George Floyd.

DALLAS - Thousands of people showed up in Downtown Dallas Saturday afternoon as peaceful protests continue over the death of George Floyd.

This is estimated to be the largest gathering held in Dallas since protests started last week.

Dallas PD estimated there to be more than 3,000 people marching.

For more than a week in Dallas, protesters have been calling for change.

“Whether I’m your friend, your cousin, sibling, spouse, it don’t matter. Whether I got relation to you or not, black lives matter,” Drew Carter said.

The protest was a sharp contrast to the violence that took place last Saturday.

Police vehicles were damaged and officers used tear gas and other non-lethal uses of force to break up the crowd.

Following the violence, a 7 p.m. curfew was in place for parts of Dallas.

On Saturday, that curfew was lifted.

For some, Saturday was their first time protesting.

She painted a picture of George Floyd, the man whose death sparked a national call for change and end in police brutality.

“This is my first ever march in anything and I keep trying not to cry, it’s just so wonderful,” she said. “Just to know that there are others out there that want to support them as well.” 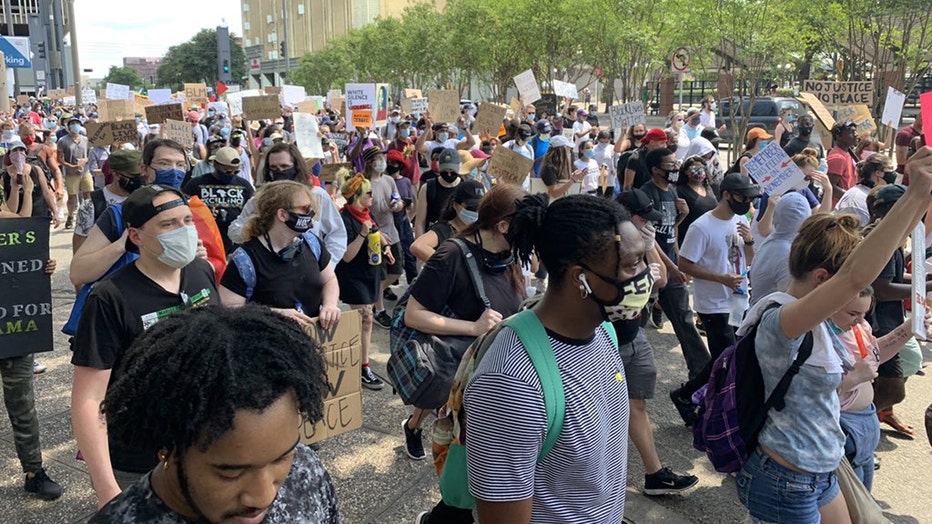 Some policy changes have already been made since people started protesting.

Dallas police officers now have the "duty to intervene" when they see another officer improperly using force.

Soon, officers will also have to give warning before firing their weapon.

Some protesters say it’s a start, but not enough.

They are also calling for a review of the use of force used on protesters last week.

“Your group of jack boots have arrested journalists, shot someone’s eye out, caused blood to pour down a young woman’s face, all over some property that will be replaced,” Jennifer Miller said.