The new owner of a storage unit in Rockwall made a surprise discovery that prompted police to shut down a roadway near a shopping center Friday night.

ROCKWALL, Texas - The new owner of a storage unit in Rockwall made a surprise discovery that prompted police to shut down a roadway near a shopping center Friday night.

Rockwall police said military-grade munitions and equipment were found inside the newly-purchased storage unit at The Vault Storage off East Ralph Hall Parkway.

Authorities said any items that posed a threat to public safety were removed or destroyed.

They said they usually go after collectible units, but in this case, they knew they had to call police.

Justin Grimes and his wife, Jeana, have been buying up storage units for a few years, but this unit was different.

"This is probably the most extreme, intense unit that we have found," Grimes said. "It’s better safe than sorry."

The couple said the previous owner, an elderly man, stopped paying rent so they purchased the locker for $3,000.

Grimes, who served in the Marine Corps himself, said he had a suspicion when he saw some inventory photos online.

"I knew what was in there. I called the police to come verify what I think I already knew," he said. "I still don’t know what all they took." 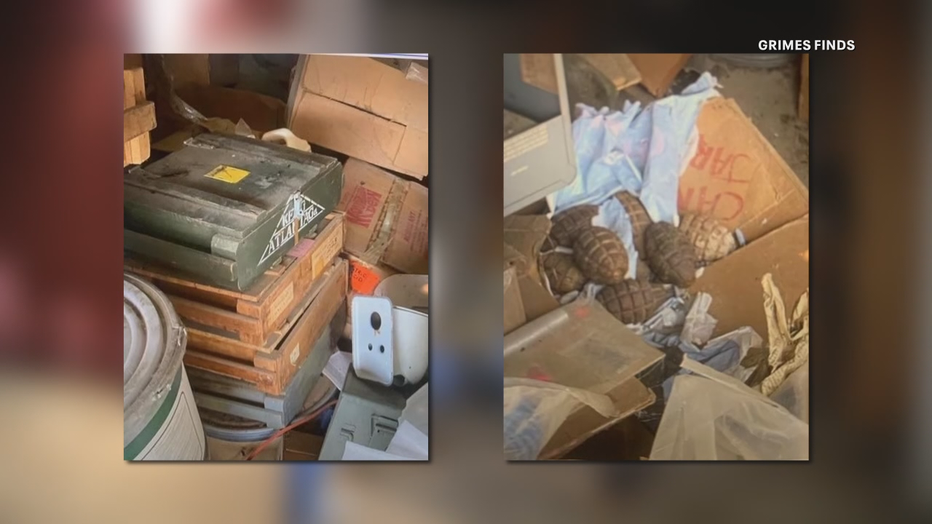 Rockwall police won’t disclose all of the possible military inventory.

"Our first concern is the safety of the public," said Rockwall PD Lt. Aaron McGrew.

McGrew confirmed they called in the Garland Bomb Squad, the United States Air Force, and the FBI to set up a perimeter Friday night.

Ralph Hall Parkway was shut down and nearby businesses were evacuated.

"There was one device that was unstable and needed to be made safe and they took it into a field directly behind," McGrew said.

The Grimes documented the overnight investigation on their YouTube channel, Grimes Finds.

Once federal agents cleared out early Saturday morning, they started to sift through what was left.

There are several boxes they haven’t even had time to go through before they head straight to auction.

"I really love what I do, and so I was up on these barrels with tank rounds around it because I wanted to get a baseball card. It could be a million-dollar baseball card in there," Grimes added.

Rockwall police said they handed the investigation over to the FBI to decided exactly where the weapons came from and whether these weapons were legal to own.