Many families are reaching out to FOX 4 about issues they are having with their apartment complex following the severe winter weather.

CEDAR HILL, Texas - There are stains from where water is coming through the ceiling of Chasity Buckley’s apartment.

"You can have everything in the world and lose it all in one day," Buckley said.

She lives at Legacy of Cedar Hill.

Hundreds of apartments there lost power this week.

Buckley went to stay with family Monday, and that by the time she came back Tuesday, she realized maintenance crews ripped out her floors.

That’s when it hit her that her unit was flooded. Since she said she didn’t get a call from the complex, she didn’t have an opportunity to save some belongings.

"We already didn’t get a call about the flood, so it’s just a lot of tension trying to figure out what to do next when no one’s giving you the information that you need," she added.

She’s not the only one reaching out to FOX 4 about issues there. Several families said they’re not getting the information they need.

FOX 4 tried to have a conversation with management, but received a, "No comment." 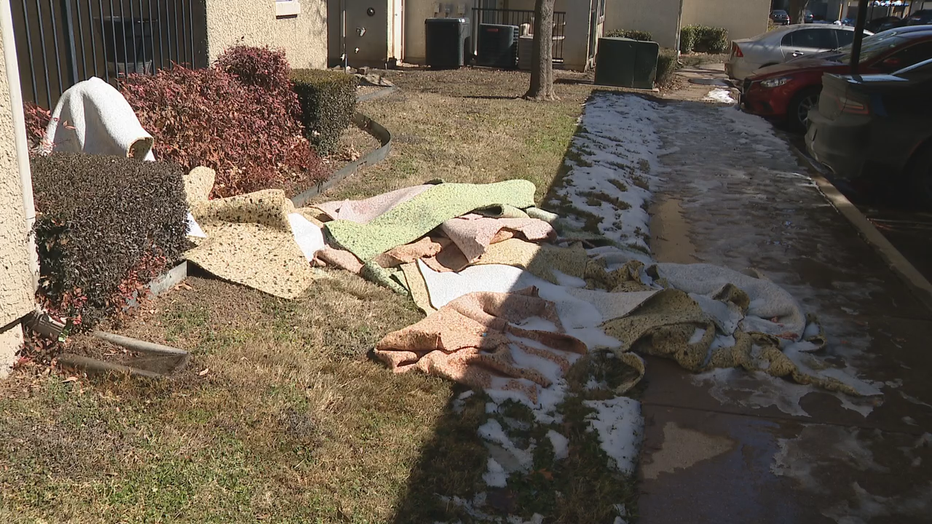 "So some of the buildings have come back online for water, but there’s a lot of units here that still don’t have water," said Lauren Sanchez, who is regional emergency management operations coordinator for Cedar Hill, DeSoto, Duncanville, and Lancaster.

Emergency managers said pipe bursts are to blame, and it’s not just there.

"Everybody’s busy. Everybody’s getting called out. So plumbers and contractors even have their own lists of where they can go to get people," Sanchez explained. "So unfortunately, throughout the whole state, it’s going to be a while before a specific concern can be addressed because everyone’s so busy."

They are taking similar actions in other areas across the state.

"Yeah, we often see folks that are pretty down," said Rupert Robbins, associate director of disaster relief for Texas Baptist Men. "My message would be, come let us love on you. We’re not here to judge."

Buckley, who works two jobs and goes to school, isn’t worried about anyone judging her, but she is concerned about what leaking water can do, if not treated, to the place she lives.

"And no one’s helping, no one’s giving any information, and these people around me, they’re gone because they can’t stay here or they’re actually living in their apartments where there’s still water and they have kids," Buckley added.