Darrel Glen Hood, 32, was identified as the man shot and killed by officers Friday. He was arrested on Wednesday. Just two days after that arrest, police would respond to shots fired in Richland Hills and encounter Hood with a rifle.

RICHLAND HILLS, Texas - The armed man shot and killed by Richland Hills police in Tarrant County last week had been arrested on assault and weapons charges just two days prior to the incident.

Darrel Glen Hood, 32, was identified as the man shot and killed by officers Friday.

Hood was arrested on Wednesday. Just two days after that arrest, police would respond to shots fired in Richland Hills and encounter Hood with a rifle.

Records show Hood bonded out of jail on the assault and weapons charges just after midnight Friday morning.

By Friday afternoon, police say Hood was running down a neighborhood street with a rifle and later pointed it at officers.

People who live in the Richland Hills neighborhood described chaos in their quiet neighborhood Friday afternoon.

"Like a man with no shirt, no shoes, running up the street firing with a firing arm," recalled neighbor Stacy Reddy.

On Monday, the Tarrant County medical examiner Hood as the man shot and killed by Richland Hills officers.

A records search revealed a criminal history, including some misdemeanors and credit card fraud.

FOX 4 also learned that just two days before the shooting, Fort Worth police arrested Hood for aggravated assault with a deadly weapon, unlawful carrying of a firearm and marijuana possession. 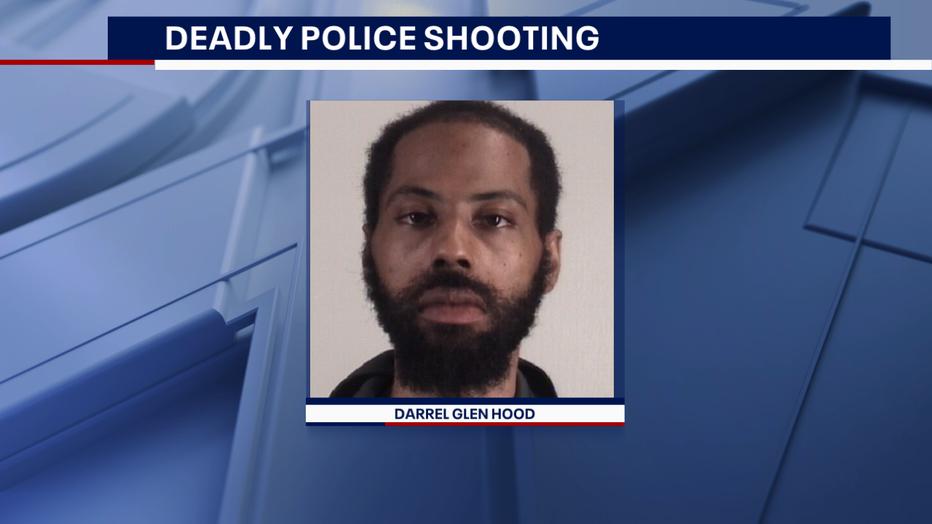 Records show Hood bonded out Friday. It’s the same day this surveillance camera captured a man darting across lawns screaming for someone to call police. Seconds later, the camera captures Hood running down the street carrying a rifle. Minutes later, two Richland Hills officers shot and killed Hood after they say he pointed the rifle at them

Reddy is the neighborhood watch block captain. Her girls were hiding with their grandmother during the shooting.

"I wanted to make sure I kept a straight state of mind just in case I had to flee and take my sister with me," she said.

Neighbors tell FOX 4 that Hood lived in an RV in the driveway of a newly remodeled home. Some say he had been displaying odd behavior lately.

"I know he did walk around several times at night wearing a mask," Reddy said. "I wish he had made better choices."

Richland Hills police will not comment about the initial shooting investigation at this point in time.

The Texas Rangers are investigating the police-involved shooting.

North Richland Hills and Haltom City police are assisting other parts of the investigation.