New York City’s Times Square was covered in snow as a winter storm hit the area on Feb. 1. Credit - EarthCam via Storyful

NEW YORK - A major snowstorm pummeled the Northeastern region of the United States, shutting down schools, vaccination sites and forcing flights to be canceled.

The National Weather Service said "widespread heavy snow," bringing 1 to 2 feet in many areas was forecast from Pennsylvania into New England through Tuesday — including cities like Philadelphia, New York City and Boston. Snowfall rates could reach 2 inches per hour.

As of Monday morning, some areas had already gotten 3 to 5 inches of snow, with 6 inches in parts of Pennsylvania, forecasters said. In parts of New Jersey, over a foot of snow had already been reported as of Monday afternoon.

In-person learning was canceled in school districts across the Northeast, and many COVID-19 vaccination sites were closed. 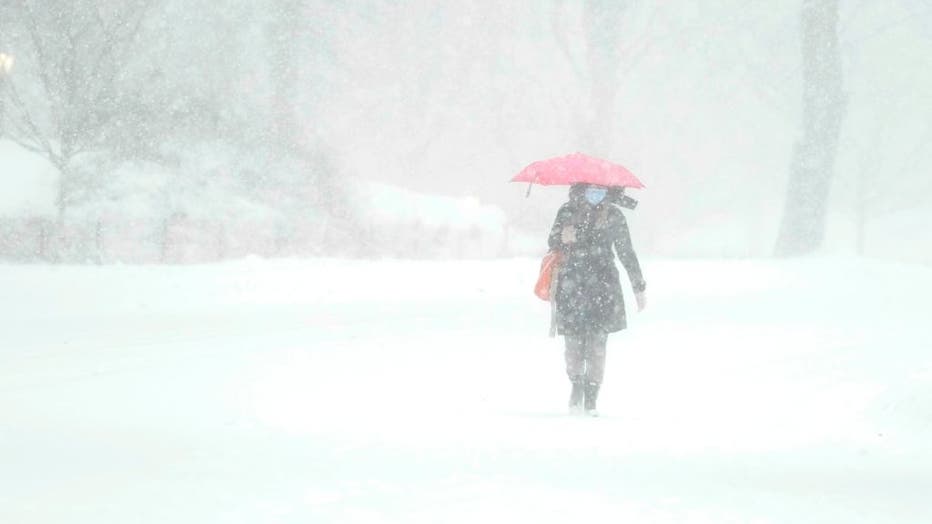 A woman walks through Central Park during a winter storm on Feb. 1, 2021 in New York City. (Photo by TIMOTHY A. CLARY/AFP via Getty Images)

In New York City, the storm had already dumped 13 inches of snow, with up to 24 inches of snow expected overall. Winds could gust as high as 50 mph from the storm, creating near-blizzard conditions and drifting snow, the National Weather Service said. A state of emergency was declared in 44 counties statewide on Monday.

New Jersey already had scattered power outages by late Monday morning, affecting about 1,500 homes and businesses, but Gov. Phil Murphy warned that high winds were likely to knock out electricity to more people across the state heading into Tuesday.

The video was recorded in Perth Amboy, New Jersey, on the evening of January 31 and into the early hours of February 1. Credit - buo01 on Twitter via Storyful

LaGuardia Airport said all commercial flights had been canceled. The snowstorm also impacted coronavirus vaccinations in many areas, with appointments for Monday in New York and New Jersey needing to be canceled and rescheduled.

Connecticut Gov. Ned Lamont said most vaccinations scheduled for Monday were being postponed, but he wasn't concerned that any vaccine might go to waste.

"The vaccines, kept refrigerated, are good for eight to 10 days, so that’s not a problem," Lamont said. "And if this is three or four weeks since your first vaccination, if it gets put off a few days, don’t worry, it will still stay very effective."

In the Boston area, the storm is expected to dump between 7 to 15 inches of snow Monday, with the heaviest accumulations expected during the evening commute, the National Weather Service said. Winds strong enough to bring down tree branches with gusts ranging from 35 to 50 mph were also forecast for the storm.

The storm delayed the opening of the Reggie Lewis Center in Boston’s Roxbury neighborhood, which was supposed to open Monday as a mass vaccination site for residents age 75 and over. Mass vaccination sites at Gillette Stadium and Fenway Park were open but with some changes, according to CIC Health, which is operating both sites 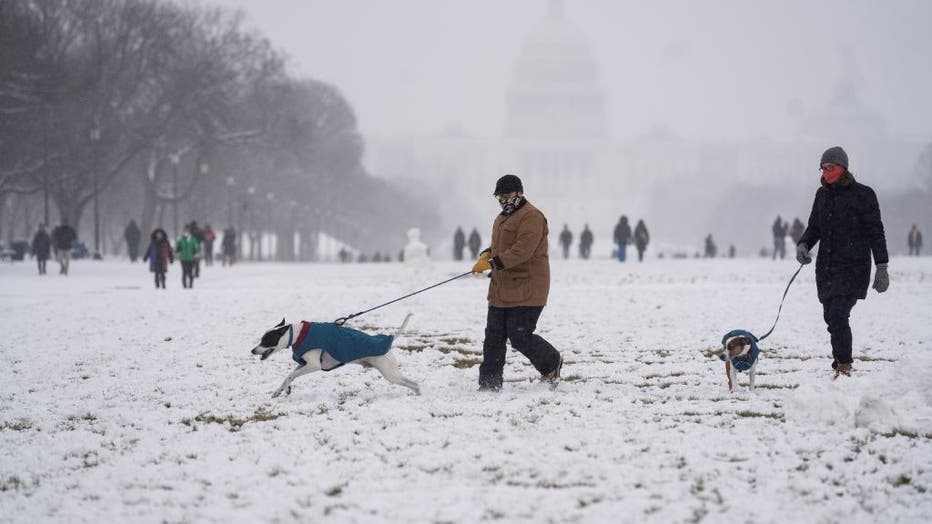 Over the weekend, the storm system blanketed parts of the Midwest in the most snow some places had seen in several years. Chicago got almost 7 inches of snow by Sunday morning, leading to the cancellation of a couple hundred flights at the city's two airports.

In Wisconsin, snow depths in some counties near Lake Michigan had reached more than 8 inches, and the snow was still falling.

Three to 6 inches of snow arrived in central Ohio by Monday afternoon, making for some slippery roads. Washington, D.C., and parts of Virginia had also received some snow, with up to 12 inches in some areas. By the afternoon, the snow reached Pennsylvania, dumping up to 24 inches.

Snow and cold in Washington led President Joe Biden to postpone a visit to the State Department that had been planned for Monday. A White House official said Sunday night that the visit would be rescheduled for later in the week when the agency’s staff and diplomats could more safely commute to attend.