For one family, their backyard retaining wall and fence have fallen into the backyard behind them. But by Little Elm city ordinance, repairing the breach is their responsibility.

Walter Stone says he will have to leave his home because the retaining wall and fence along his back property line have cratered to the yard below. It’s a crashing end to what started about five years back.

"It started when we got a notice from the HOA complaining that the back fence was leaning," he said. "That’s when we brought them out here and said, ‘It’s not the fence. It’s the wall.’" 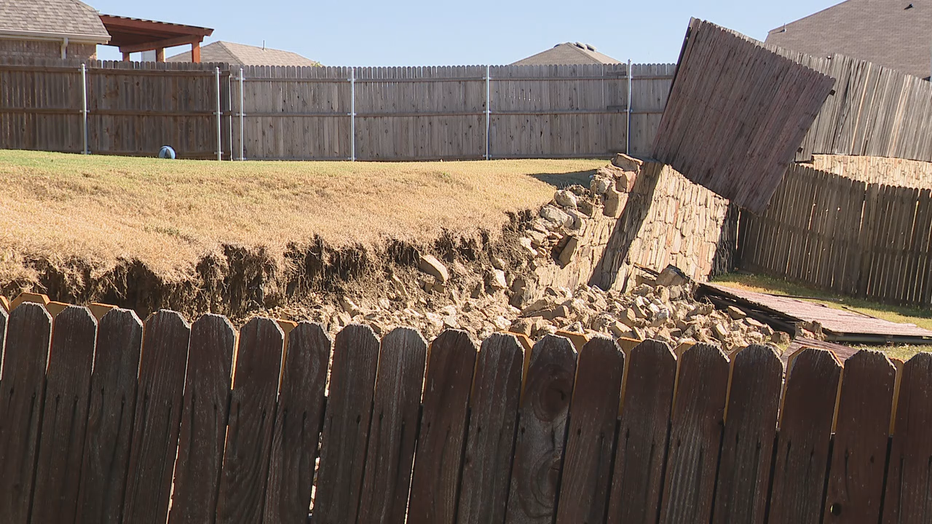 The Stones provided pictures of what they say it looked like when they built the house in 2007.

"The wall continued to lean until you saw what happened last week the thing finally came down," Stone said.

Alyce and Fred Bard have been here 2003 one street over from Stone. Their retaining wall is bowing. The fence is leaning.

"The retaining wall was already here when we came out to look at the land," Alyce said.

"I've sent letter after letter call after all because the wall is decaying," Fred said.

In a response to Fred, Little Elm in 2020 sent a copy of the town's ordinance that reads in part "when a retaining wall is placed along a shared property line, the maintenance of the retaining wall shall be the sole responsibility of the property owner whose land is located at the higher elevation of the adjacent properties."

"Because I live up and everybody else lives down, they tell me that it’s my problem," Stone said.

"The only way I can raise that kind of money is to sell the house," Stone said.

By comparison, Little Elm City Council will vote to approve making new another area of retaining wall a few streets away. The city's going to vote to pay to have part of the retaining wall replaced and repaired along that side as well. What they aren't going to fix is the part that belongs to the homeowner.

By ordinance, the homeowner is responsible for the repair and not the municipality.

It’s a costly lesson for Stone, who is selling his dream home to fix a retaining wall nightmare.

"We'll end up having to rent a house because I won’t be able to afford a house with the market the way it is," he said.