Large show of support at vigil for Celina officer, his daughter killed in crash

There was a massive show of support Thursday in Collin County for the family of a Celina police detective and his daughter who died in a crash this week.

There was a massive show of support Thursday in Collin County for the family of a Celina police detective and his daughter who died in a crash this week.

The Celina police department is a small, tight-knit department, as is the community. It almost seemed like the whole community showed up for the memorial.

The officer’s family, friends, and fellow officers showed up to remember the fallen officer. They shared stories about K.C. and his 6-year-old daughter Brynlee, who also passed away on Monday in a chain-reaction crash near their home in Grayson County, just south of the Red River. 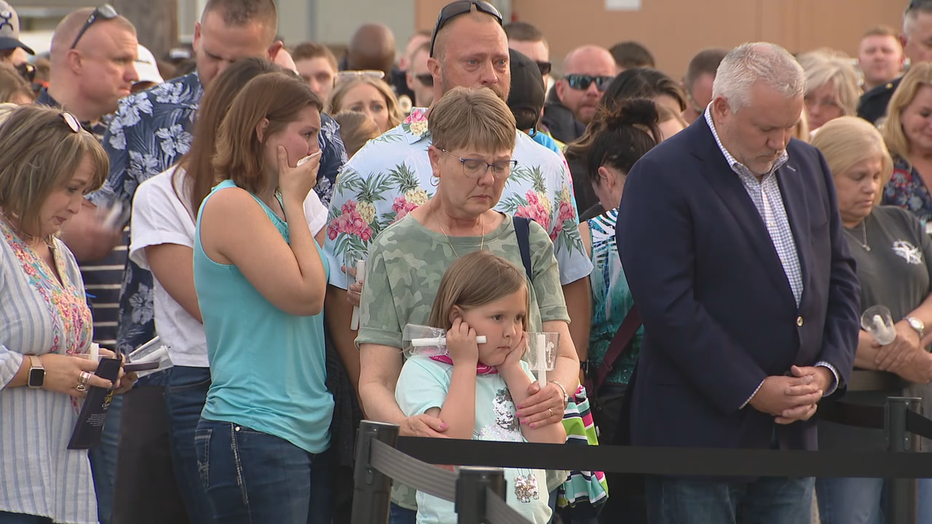 K.C.’s family was surrounded by his fellow officers and the greater Celina community.

The 33-year-old officer had just joined the criminal investigations department after three years of service with Celina PD. His friends say he was devoted to being an officer and to his 6-year-old daughter

The detective and his wife had just finished picking up their daughter from school. They were stopped behind a school bus when a sanitation truck set off the chain-reaction crash.

There were several people wearing Hawaiian shirts during Thursday’s memorial. Sgt. Kyle Peck explained the that K.C. loved those shirts and even encouraged his fellow officers to wear them in the office sometimes.

Peck brought the crowd to laughter several times as he recounted some of his favorite memories of his jovial friend.

"And those of you that know him, he cares about everybody," Peck said. "He knew how to make you mad and then turn around and hug you and say ‘It’s alright buddy.’ And you’re like ‘Well, I guess I ain’t mad anymore."

Friends also talked about K.C.’s dedication to CrossFit and his role leading active shooter classes, attracting officers from outside of Celina to go there for that training.

The entire Celina City Council as well police officers from other departments also attended the vigil, including officers from Gainesville and Prosper.

K.C.’s wife, Lauren Robinson, was also injured in Monday’s accident. She is still recovering at a Plano hospital and was there.

The Celina Police Department chaplain asked for peace and comfort for the Robinson family. Funeral arrangements are pending.