Ret. Army Specialist Jonathan Merchant has been living in a rented home in Burleson. On Saturday, the injured veteran will move to a brand-new ADA-modified home.

BURLESON, Texas - Ret. Army Specialist Jonathan Merchant has been living in this rented home in Burleson.

On Saturday, the injured veteran will move to a brand-new ADA-modified home.

The mortgage-free home will literally give him and his wife a new lease on life.

Merchant has a tough time getting around in his current home.

"Being able not to roll under the sink is a little challenging," he said.

Routine tasks like washing the dishes and taking a shower are nearly impossible to do alone. 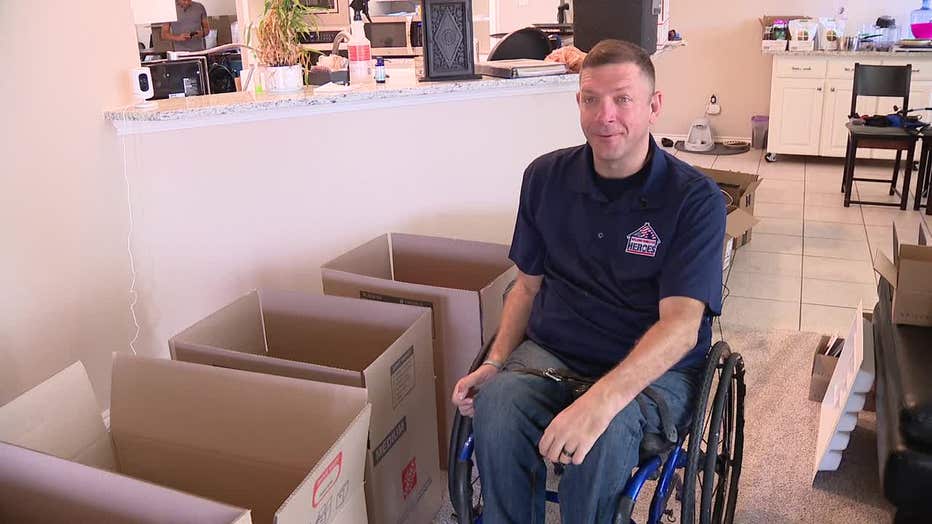 The 45-year-old army veteran suffered a life-changing injury in December 1999. Stationed at Fort Hood at the time, Merchant had a car accident off base. His girlfriend at the time was driving.

"It was raining. She lost control of the car. We started flying through the air, flipping," he recalled. "During the rollover, I broke my neck in three places."

Overnight, Merchant became a quadriplegic. He says he went through some tough times.

"Is this going to be my life? What kind of life am I going to live?" he questioned.

Despite the setback, Merchant is now a competitive cyclist. He works as a certified life coach and recently got married.

Then last October, Merchant got the surprise of his life while attending a veteran appreciation rodeo.

"They were like, ‘We are presenting you a house!’ I was like, am I dreaming?" he recalled.

Andy Pujol is the CEO of Building Homes for Heroes. Over the past 16 years, the nonprofit has provided mortgage-free homes to military veterans.

Merchant will become the three-hundredth recipient of a new, mortgage-free, ADA-modified home. The big reveal happens on Saturday.

"He’s a beautiful man, a beautiful soul in so many ways. He served this country so long," Pujol said.

Merchant got a sneak peek earlier this year when the home was in the early stages of construction. The community came together to write notes of love on the wood beams.

"I’m just overwhelmed by the gratitude from people," he said.

Merchant gets the keys to the four-bedroom, three-bathroom home this weekend. Needless to say, he and his wife are busy packing.

"It's just unbelievable, he said. "They're so many good people in this world."

Merchant will get to see his finished home in Northlake on Saturday during a big reveal party. Once they move in, he and wife want to start a family.