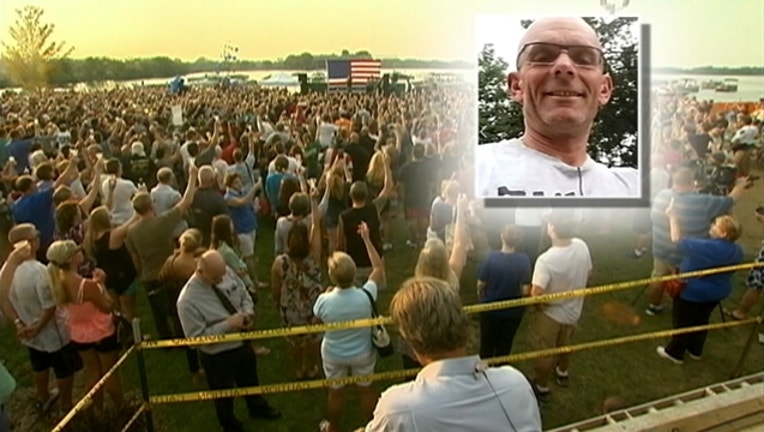 FOX LAKE, Ill. (AP) — Charles Joseph Gliniewicz was on the brink of retiring after a 30-year career in law enforcement. At 52, the tattooed police officer with a shaved head could still be tough and intimidating if the job called for it.

But he also had a sweet side that endeared him to the suburban Chicago village he had served for decades, a place where he was a constant presence at community events and a role model. Now the people of Fox Lake are mourning the officer known affectionately as "G.I. Joe" after he detoured on his way to work to pursue three suspicious men into a swamp. He ended up with a fatal gunshot wound and died Tuesday.

Hundreds of people gathered at a Fox Lake park late Wednesday for a vigil in memory of Gliniewicz.

The officer's widow, Melanie Gliniewicz, took to a stage in Lakefront Park surrounded by her sons. She thanked the people attending the vigil and those offering their support and prayers.

"My world got a little bit smaller with his passing, and he will truly be missed by all of us," she said, adding her husband was her "best friend, my hero, the love of my life for the last 26 and half years."

A minister, Mike Johnson, said Gliniewicz died serving the community and was about helping others. He asked the crowd who among them would replace him.

Earlier Wednesday, longtime friend Tammy Rivette wiped away tears as she remembered the father of four sons who was "always helping people" and "always fair."

"Even the criminals liked him," she said.

Mayor Donny Schmit, a close friend for three decades, recalled how when Gliniewicz would respond after being told something: "Roger that."

"Every morning he said he was vertical and caffeinated. These are the things about Joe I'm going to miss," the mayor said.

Rivette once sought help when someone appeared to be stalking her niece. Gliniewicz contacted the man and "had a nice long chat with him," she remembered.

"And it ended right there," she said.

On Wednesday, police continued searching for the three suspects believed to have shot the officer sometime after he radioed that he had started a foot pursuit. Authorities broadened the search even as they acknowledged that they had no indication the assailants were still in the area.

The woman, who told investigators that she wanted attention and that she chose the location because of Gliniewicz's death, has been charged with disorderly conduct and falsifying a police report and is being held at the Lake County Jail until a bond hearing, Covelli said.

Earlier, there were many tributes to Gliniewicz across Fox Lake, a village of 10,000 people encircled by lakes and forest preserves about 55 miles north of Chicago.

Workers at the Sign Appeal store were making window signs honoring Gliniewicz. They read, "All gave some ... some gave all."

Elsewhere, 17-year-old Devan Arvay held a black flag with a blue line across it in memory of Gliniewicz. Arvay was in a police Explorers post, which introduces young people to possible police careers. Gliniewicz led the group for four years.

"He was always enthused and someone you could really look up to," Arvay said. "A mentor is what he was."

Gliniewicz was planning to retire at the end of the month and had just met Monday with the mayor to ensure that the Explorer post would go on.

The next day, when he first learned that an officer had been shot, the mayor texted Gliniewicz, "Hey Joe. Call in right away. We need you," Schmit said. "And then I found out it was him."