TxDOT in Dallas and Tarrant counties began Monday pre-treating bridges and overpasses that could become dangerous in the event of icy weather Wednesday and Thursday.

FORT WORTH, Texas - Crews are spreading out to try and keeping traveling on North Texas roads safe as the region braces for another, albeit shorter-lived, icy winter blast.

TxDOT in Dallas and Tarrant counties began Monday pre-treating bridges and overpasses that could become dangerous in the event of ice.

"We took advantage of this time starting [Monday] to go out to our system to pre-treat with brine, the salt and water solution we’ve had pretty good success with," said Val Lopez, TxDOT spokesman.

The same road preps are happening in Denton County, with the highest probability of freezing rain and sleet expected later on Wednesday.

TxDOT, as it does typically during severe weather alerts, will have crews on standby to deal with problems that arise. For now, they’re working to try and get ahead of the storm.

"The idea there is we are applying it now so that wintry precipitation starts to fall the brine will prevent the ice from bonding on the roadways. Ultimately that’s what we’re trying to do. We’re trying to prevent ice from forming especially on those bridges and overpasses," Lopez said.

The city of Fort Worth, which pre-treated surface streets ahead of the last round of winter weather, says it will begin the process again on Wednesday morning.

"We’ve all got one winter weather storm under our belt. We are ready to get back out. We have crews on standby," she said.

Mitchell says in just Dallas County, there are more than 3,000 bridges and overpasses that need treatment. At least right now, the hope is that this week’s round isn’t as bad as the one earlier this month.

"You’ve got to be prepared to postpone your driving plans or cancel them if the winter weather makes hazardous conditions," she said.

Unlike many Texas drivers, Arine Anderson used to live in Buffalo, New York and, Toronto. So for her, driving in winter weather is easier. But depending on what happens, she might just work from home.

"If weather conditions are severe, I have the luxury to work remotely. Everyone doesn’t have that option," she said. "But remember, no check is worth your life."

For the second time in its nearly 40-year history, DART is shutting down rail service for weather conditions.

Then, there are those who rely on public transportation to get to work.

For the second time in its nearly 40-year history, DART is shutting down rail service for weather conditions.

DART did the same thing earlier this month during a winter storm.

DART officials say rail service is suspended for Wednesday and buses will operate on a Sunday reduced schedule.

"It’s an inconvenience because we rely on the train and busses," said DART rider Donna Garrett. "I can catch the bus to go downtown, but I need to go to DFW in Irving.

DART says shuttles will be available to pick people up from stations, but getting around is going to take much longer.

When asked if DART learned any lessons from the last winter storm, its spokesperson — without admitting they made a mistake — said this time it’s taking a day-to-day approach to be more "flexible."

Plans for Thursday, when the worst of the weather is expected, are still undecided.

With the chance for freezing rain on Wednesday and Thursday, school districts will obviously monitor conditions.

With the chance for freezing rain on Wednesday and Thursday, school districts will obviously monitor conditions.

Most are taking a wait-and-see approach on potential delays or cancellations.

Angela Serna is prepared to take the decision for her kids into her own hands.

"They’ll be staying home if it gets really bad whether the school is closed or not."

Dallas ISD says its decisions will be made no later than 6 a.m. the day in question.

Classes will not be held if buses are unable to operate safely, if electric service at schools is disrupted or if natural gas to schools is curtailed.

As far as a day off, some kids want to be in school.

"I want to be in class. I get bored at home," said seventh-grader Veronica Ortiz.

Others would rather be home for a day.

Most North Texas districts plan to operate Wednesday, but outdoor sports are canceled for some, including Fort Worth ISD.

Thursday may be the big question for classes, and parents know to be prepared for whatever type of weather gets thrown their way.

Temperatures will drop Tuesday night because of the Arctic front and some people will find themselves close to or below freezing on Wednesday.

A winter weather advisory goes into effect Wednesday at 6 a.m. and will last through 6 p.m. Thursday and is for the entire region. 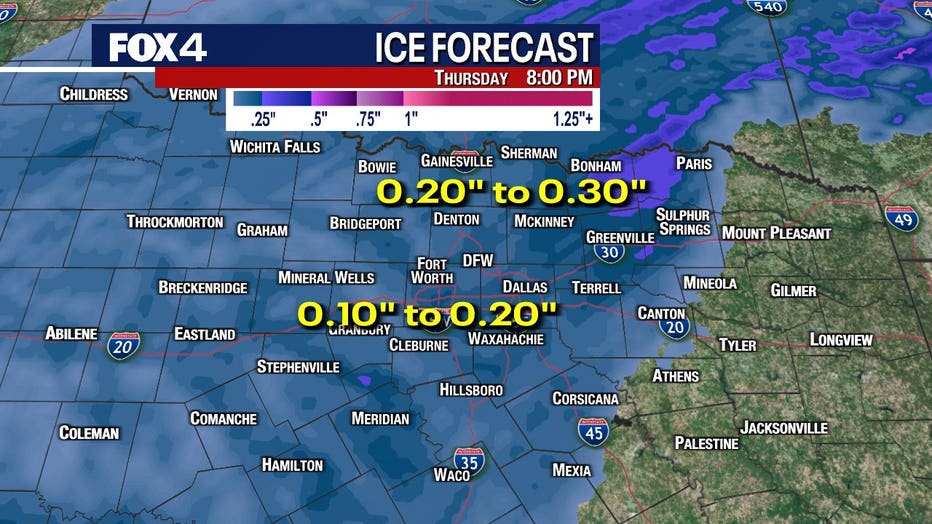 The temps will fall into the upper 20s in the metroplex and any rain that falls could create ice on the roads.

By Thursday afternoon, the precipitation is expected to end.