Tension ran high as the Dallas Police Department prepared to assist the parks department in removing tents from Pioneer Park.

DALLAS - Dallas police had riot shields in hand as the city of Dallas forced the pop-up homeless encampment known as Camp Rhonda to move once again.

This time, the camp was set up just off the front steps of Dallas City Hall.

And those who live there said they picked that spot to show the city why there needs to be more housing options for the homeless.

In protest, people linked arms as police stood by.

Tension ran high as the Dallas Police Department prepared to assist the parks department in removing tents from Pioneer Park. The park is also a historic cemetery.

In the end, the people of Camp Rhonda moved their tents on their own to save them from being seized.

Police are monitoring Pioneer Park Friday night to see if anyone comes back. 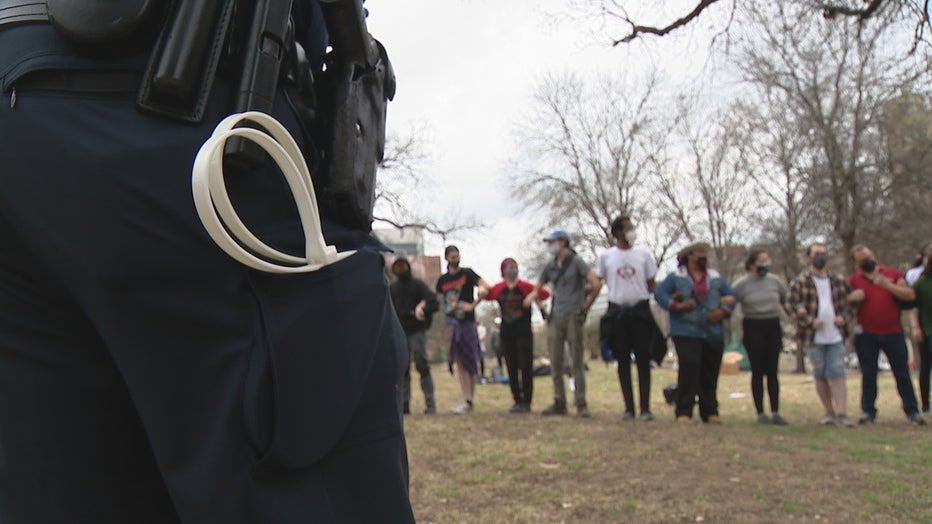 Robert Bates has been homeless for 12 years. He said he joined Camp Rhonda in hopes of getting help.

"I was originally with this group because I'm tired of being out here. I wanted to get some help with housing," he said. "I knew I wouldn't get it on my own in a hidden corner somewhere."

Since Pioneer Park is a city park, people are allowed to stay there until 11:00 p.m. But putting up temporary shelters is what is against city code. That is why people were told to take their tents down.

The city of Dallas refused to talk with FOX 4 about the enforcement, but said in a statement that every person there experiencing homelessness has been offered access to a shelter.

The CDC has advised cities to not break up encampments which, it says, could further spread coronavirus in the community.

Dallas police had riot shields in hand as the city of Dallas forced the pop-up homeless encampment known as Camp Rhonda to move once again.

Dallas police officers donned riot shields and had zip ties at the ready, but no violence erupted.

Ryan Ahmadian is co-founder of the Dallas Houseless Committee, the organization that began providing food and tents to people at Camp Rhonda's first location by Austin Street Center.

When the city ordered that camp to shut down, some of the occupants agreed to move into temporary hotel space. Others said the homeless shelters are full and they don't want to follow rules for staying in more stable housing options.

"We have nowhere to go," Ahmadian said.

Many said they’re uncomfortable inside shelters, and they’d rather the city open up an area for tents or something else.

"Usually, I’ll just get under somewhere like if it raining where I won’t get wet," Bates said.

The Dallas Houseless Committee filled up a U-Haul with people's belongings.