The message to city leaders just steps from City Hall is if the city can't give them a key to a place of their own, they at least want the city to give them a place for their tent.

The people in the encampment say they were forced to move their tent city from private land, where they had been given permission to stay.

Now, they have a message for Dallas city leaders. 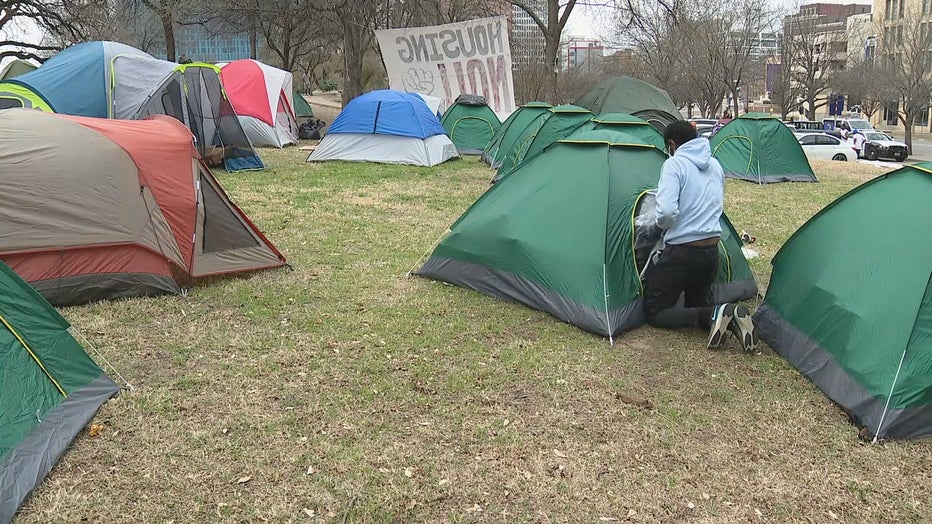 With his latest campsite in the shadow of City Hall, Jerry Henderson explained what his typical day is like.

"Getting up. Try to hustle to do what they call panhandling so the ladies can have something to drink and something to eat," he said. "Me, cigarettes and beer every now and then."

Henderson is 34 years old, and he says he's been homeless since he was 17.

"A bunch of us have felonies. They don't want to help us," he said.

This is one of about three dozen encampments that popped up this week.

Willie Hodges has been homeless 20 years. He says the city's continual sweeps of encampments is frustrating.

"I had a wallet I happened to leave behind," he said. "I come back, and it’s all gone."

The message to city leaders just steps from City Hall is if the city can't give them a key to a place of their own, they at least want the city to give them a place for their tent.

Aeshna Mairad is one of the organizers of what is known as Camp Rhonda, named for a woman who died on the streets.

"We chose city hall to put pressure on city to provide housing and to stop the sweeps," she said.

The city says it is trying to connect people with shelters. But on Thursday afternoon, it also gave the camp 24 hours’ notice to vacate the property, which is a historic cemetery.

Some occupants say the shelters are full, and the city's other options for more stable housing are not desirable.

"We can't have a beer, a drink or whatever. That's why people don't want to get an apartment," said Dale Dennis, who is homeless.

"I never in my 15 years met someone who said I want to be in this situation," he said.

Roby says if the city does not create more housing options, encampments will likely grow.

"The cost of housing is dramatically increasing," Roby said. "We are not keeping pace."