Who qualifies for student loan forgiveness under the new changes?

The U.S. Department of Education this week announced changes to its income-driven repayment program (IDR), which was expected to bring immediate debt cancellation for at least 40,000 borrowers and help millions of others lower their debt.

The department said Tuesday that the steps taken will help an additional 3.6 million borrowers move closer to student loan forgiveness.

The new fix came in response to the "historical failures" of the program, it added.

What are income-driven repayment (IDR) plans?

There are currently more than 9 million borrowers enrolled in income-driven repayment plans, a program created in 1994 that was meant to provide a safety net for people who struggle to repay student loans. The program now offers five repayment options that provide reduced monthly payments based on income and family size.

The borrower’s remaining balance is supposed to be automatically forgiven after 20 or 25 years, depending on the plan.

Out of the more than $1 trillion in student debt held by the federal government, about half is being repaid through those plans.

But a study of the program, also released this week, identified 7,700 federal student loans that appeared to meet the conditions for loan forgiveness but had yet to be canceled as of September 2020. So far, only 157 loans have been forgiven through income-driven plans, according to the study.

The number of loans eligible for forgiveness through the program is also expected to grow in the coming years, according to the Government Accountability Office, which released the report. By 2030, the office estimates that up to 1.5 million loans held by 600,000 borrowers could meet the conditions for forgiveness.

In a response to the report, Education Department officials acknowledged the failures of the program and promised improvement. The changes announced this week are expected to help some borrowers get their relief on their loans more quickly. 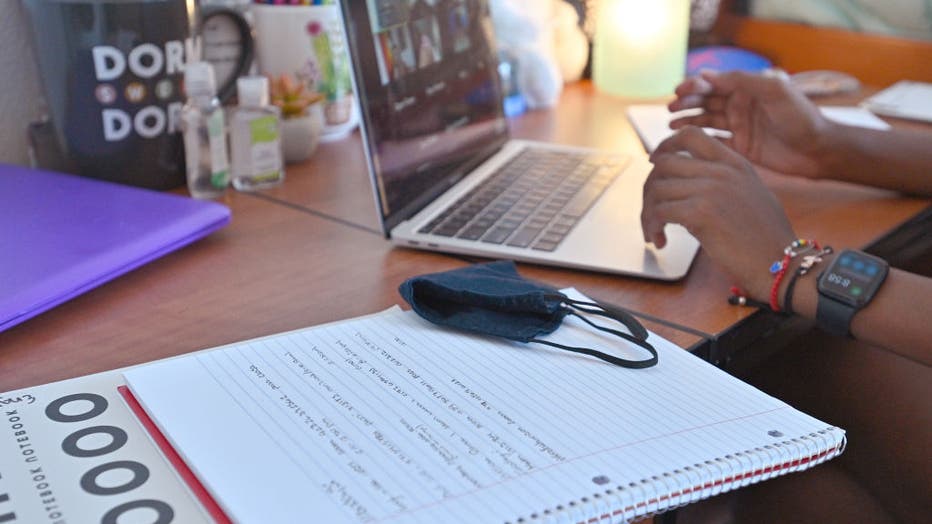 FILE IMAGE - The desk in a college dorm room is pictured at the University of New Mexico on Aug. 17, 2020, in Albuquerque, New Mexico. (Photo by Sam Wasson/Getty Images)

But federal student loan programs can be complicated to navigate. Here’s who is eligible under the new changes and when borrowers may see changes in their account:

As a refresher, federal borrowers who sign up for an income-driven repayment plan can have the remaining balance forgiven after 20 or 25 years of qualifying payments, depending on which of the plans they choose.

The Department of Education recently reviewed its procedures for tracking these repayments, and it found "significant flaws" that suggested borrowers have been missing out on progress toward student debt forgiveness.

As a result, the department is doing a one-time review of payments under income-driven repayment plans with these specific details:

The Education Department said this one-time revision is necessary to "correct for data problems and past implementation inaccuracies."

Michael Kitchen, an editor with Lending Tree's Student Loan Hero blog, said regardless of one's student loan situation, it's worth taking a look at their account and if these new changes may apply.

"And of course, if you were on an IDR program or you had any trouble with it, or you were eligible for one and didn't take one, it's really worth calling your servicer and looking into it," Kitchen added. "They're really trying to crack down on this and make sure these programs work the way they're intended to."

A loan forbearance allows borrowers to temporarily suspend making payments or reduce their monthly payment amount for up to 12 months with interest continuing to accrue in most cases.

To be eligible for loan forgiveness through income-driven repayment plans or the Public Service Loan Forgiveness (PSLF) Program, borrowers generally have to make a minimum number of qualifying payments. But going into forbearance will not allow them to make progress toward that forgiveness.

The Education Department has guidelines when it comes to forbearance, allowing a maximum of 12 months at a time and 36 months overall for a student loan. But a review of the use of long-term forbearance was found to be "remarkably widespread."

More than 13% of all Direct Loan borrowers between July 2009 and March 2020 had used forbearance for at least 36 months cumulatively, the department said. This suggests that loan servicers placed some borrowers into forbearance in violation of department rules, "even when their monthly payment under an IDR plan could have been as low as zero dollars," it added.

What are the consequences of this for a borrower? The Department of Education noted how a borrower advised to choose forbearance – particularly long-term, consecutive uses of forbearance – can see their loan balance and monthly payments grow due to interest added on to the principal balance — sometimes leading to delinquency or default.

They also miss out on "critical progress" on payments toward IDR and PSLF forgiveness, which can "set them back years."

To address the problem of borrowers being inappropriately directed into forbearance when an alternate plan could have been more beneficial, the department is doing the following:

The department estimates that 3.6 million borrowers will receive at least three years (36 months) of additional credit toward student loan forgiveness under income-driven repayment plans — which, again, typically comes after 20 to 25 years of qualifying payments.

The Public Service Loan Forgiveness (PSLF) program, which was launched in 2007 as a reward for college students who go into public service, cancels debt after 10 years of qualifying monthly payments on federal student loans.

The PSLF payments must be made under an income-driven repayment plan, so the new changes will help bring some of those borrowers closer to forgiveness. The department estimated that these changes will result in "immediate debt cancellation" for at least 40,000 borrowers under the PSFL program.

In 2021, the Biden Administration unveiled major changes to the PSLF program — which had long been criticized for its complex requirements. It said borrowers who have worked 10 years in a qualifying public service job will be eligible for loan relief no matter what kind of federal loan or repayment plan they have through Oct. 31, 2022.

Kitchen stressed how the temporary waiver will expire in October, "so it’s really worth checking out whether or not you qualify for that program as well."

When will borrowers see the effect in their accounts?

The Department of Education said it would begin work on implementing the new changes "immediately," but borrowers will not see the effect in their accounts until the fall of 2022.

"Beyond the changes that will provide relief retroactively to borrowers, [the Department of Education] will take action to ensure that borrowers continue to receive these benefits in the future," it said.