DALLAS - Texas Governor Greg Abbott wants the Department of Public Safety to be able to investigate whether unaccompanied minors entering Texas are victims of human trafficking.

It is a response to overflow conditions at federal facilities along the border.

"So far this year, more than 11,000 minors have been apprehended crossing into Texas," Abbott said.

On Monday alone, border patrol took in about 280 child migrants in the Rio Grande Valley sector.

It's possible many of those unaccompanied minors could end up in North Texas. 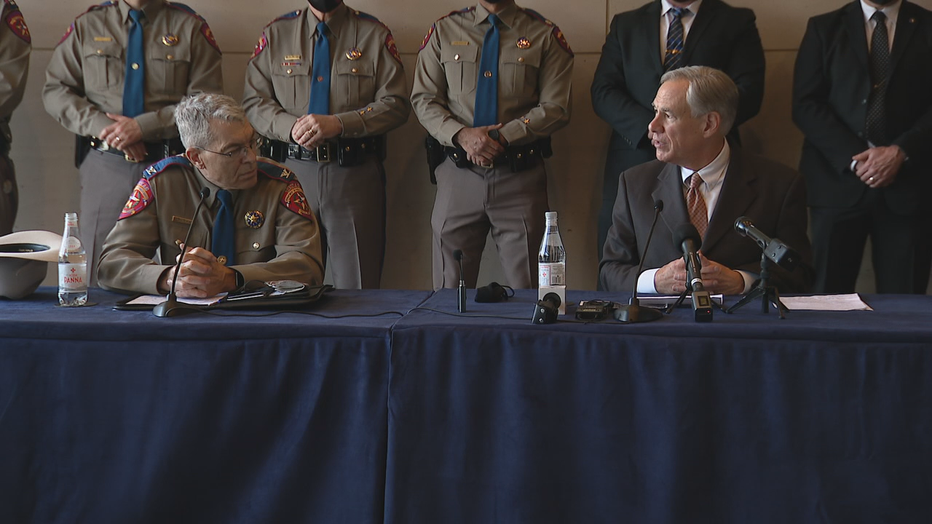 Flanked by DPS troopers from the North Texas region, he spoke at the Omni Dallas Hotel Wednesday -- next to the convention center -- demanding Texas DPS be allowed access inside the Kay Bailey Hutchison Convention Center when unaccompanied minors are housed there.

"It is my expectation that the Biden Administration will allow [DPS] and your team into the convention center to visit with the children," Gov. Abbott said.

Those children are unaccompanied migrant teens being bused to Dallas from overcrowded border facilities.

The federal government is leasing part of the convention center for up to 90 days.

Outside the convention center, a few immigration rights activists demonstrated with signs Wednesday.

"If they are coming here for the pursuit of happiness, they should be entitled to it. This is a nation of immigrants," Dallas resident Chris Alvarez said.

RELATED: Feds to house up to 3,000 immigrant teens at Dallas convention center

The city of Dallas is not involved in the operations.

The U.S. Department of Health and Human Services and FEMA aren’t giving many details about housing the migrant children.

The governor wants DPS troopers to be allowed to interview the teens being taken to the Dallas convention center to find out if they're victims of human trafficking.

Gov. Abbott is calling for more transparency and a solution to slow the surge.

Days after the announcement of undocumented minors being brought to Dallas, there was activity at the convention center.

Federal vehicles and officers were in front of the building and temporary showers and bathrooms were seen at loading dock.

The governor wants DPS troopers to be allowed to interview the teens to find out if they're victims of human trafficking.

"It's important that we identify those things, pursue those things, and make sure there's no crimes," DPS Director Steve McCraw said.

It is unclear if FEMA or the Department of Homeland Security already conduct such interviews.

Under the Biden Administration, all unaccompanied minors who cross the border are being allowed to remain in the U.S. while they seek asylum hearings.

"There's a couple of different steps in the process," Laura Collins explained.

Collins is an immigration expert and attorney with the Bush Center.

She said the teens will likely be transferred to an agency called the Office of Refugee Resettlement.

Volunteers from Dallas-based nonprofits, like Catholic Charities and Faith Forward, will assist federal workers in operating the temporary shelters.

Organizations likes LULAC will help the teens get legal representation.

"We're going to welcome these children and try to do everything we can facilitate the process," said Rene Martinez, who is president of LULAC Council 100.

It’s not known how soon these teens could go before a judge or magistrate, as the immigration court system is overwhelmed.