It's part of a White House plan to handle the surge and backlog at the southern border. Reports say the first buses bringing them here could arrive this week.

DALLAS - The U.S. government plans to use the Downtown Dallas convention center to hold up to 3,000 immigrant teenagers as sharply higher numbers of border crossings have severely strained the current capacity to hold youths.

It's part of a White House plan to handle the surge and backlog at the southern border. Reports say the first buses bringing them here could arrive this week.

The Kay Bailey Hutchison Convention Center will be used for up to 90 days beginning as early as this week, according to written notification sent to members of the Dallas City Council on Monday. Federal agencies will use the facility to house boys ages 15 to 17, according to the memo, which describes the soon-to-open site as a "decompression center."

U.S. Health and Human Services is rushing to open facilities across the country to house immigrant children who are otherwise being held by the U.S. Border Patrol, which is generally supposed to detain children for no more than three days. The Border Patrol is holding children longer because there is next to no space in the HHS system, similar to the last major increase in migration two years ago. 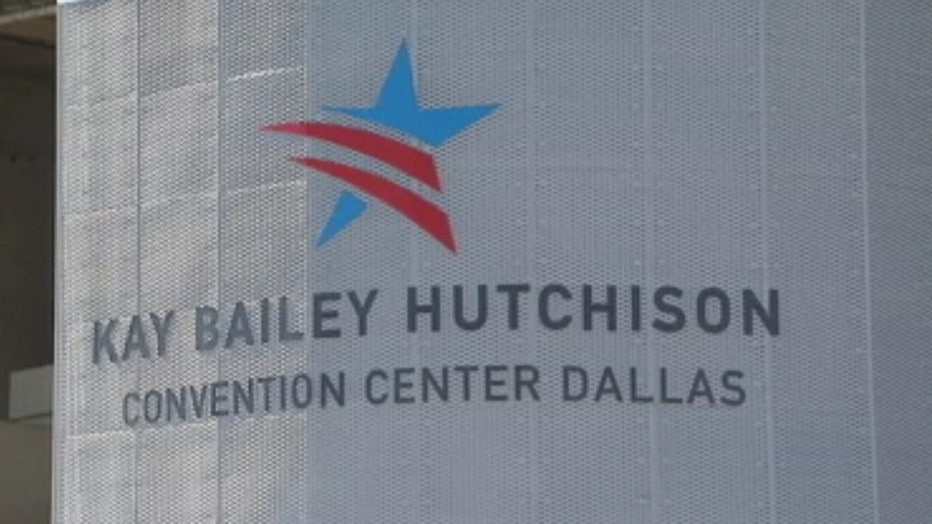 "I am incredibly proud of the agents of the Border Patrol, who have been working around the clock in difficult circumstances to take care of children temporarily in our care," Mayorkas said in a statement. "Yet, as I have said many times, a Border Patrol facility is no place for a child."

The memo sent to Dallas City Council members says the Federal Emergency Management Agency and HHS will "be responsible for providing shelter management and contracts" for food, security, cleaning, and medical care at the convention center. Dallas previously offered space to HHS during the 2014 surge of crossings of immigrant children.

Dallas City Manager T.C. Broadnax said in a statement that "collective action is necessary and we will do our best to support this humanitarian effort." He referred questions to HHS, which did not respond to requests for comment Monday.

HHS also has said it will house immigrant youths in Midland. Teenagers began arriving Sunday at a converted camp for oilfield workers where volunteers from the American Red Cross will care for them.

Catholic Charities of Dallas CEO Dave Woodyard says they are one of multiple North Texas organizations assisting the federal government.

"We just found out in the last few hours that this is happening in our community. Our mission is to serve people in need, no matter their walk of life or how they came to be in need," he said. "Really just being a calm, helpful voice to speak to them, do a few activities with them, show them where the lunch line is, somebody non-governmental, more of a friend to help them through this."

Neither HHS nor the Red Cross would detail how the volunteers have been trained or whether they have undergone FBI fingerprint checks. The Red Cross said in a statement that it was working with HHS to "orient our volunteers."

"HHS will utilize all available options to care for the children referred to us safely," the agency said in a statement. BuzzFeed News first reported the opening of the Midland facility.

Governor Greg Abbott, who recently deployed the National Guard and DPS resources to the border blames President Joe Biden's policy for the surge in minors. He spoke to FOX News Sunday about children being housed in Midland.

"If they are going to be working with us, the governor of Texas should know exactly what they are doing, how many people are they bringing in here, where are those people going, what are they doing after that, what kind of COVID protocols they are using," Abbott said.

The governor also has concerns about COVID spread. He wants the federal government to inform the state about how many children have tested positive for COVID.

"They are overwhelmed, and they are finally stepping up to provide the resources they need," Abbott said. "But it’s a day late and far short."

The children could be brought to Dallas as early as this week.

Whenever they come, Catholic Charities says they will be ready.

"I do feel like there is going to be some number of kids here this week. A few dozen, maybe a few hundred," Woodyard said. "Then over time it could be in the thousands plus, but that's speculative on my part at this point."

The surge at the U.S.-Mexico border has presented a major test for President Biden's administration, which promised to break from the more restrictive measures against migrants enacted by former President Donald Trump. Biden has left in place some Trump policies, notably the expulsions of immigrant adults and families under a public-health declaration citing the coronavirus pandemic.

Biden declined to reinstate public-health expulsions of children, and his administration has also been unable to expel many families in South Texas due to policy changes in Mexico's Tamaulipas state, across from the Texas Rio Grande Valley.

Border agents are apprehending more than 400 children a day on average, far more than the number of children that HHS is processing and releasing to sponsors. The Biden administration has announced several policy changes to try to expedite releases, but experts and immigration lawyers say the government could do more to speed up the process, particularly of releasing children to their parents in the U.S.

There is no word on if the government will reach out to school districts to assist if the teens are here for an extended period of time.