AMARILLO, Texas - Governor Greg Abbott says the team sent to Amarillo to battle a surge in cases has successfully slowed the spread of COVID-19 in that region.

During a Wednesday press conference, the governor said most hot spots in the state occur because of either a jail or prison, nursing home or meatpacking plant. Amarillo was hit by outbreaks in all three of those facilities.

On May 15, Randall and Potter counties saw the highest number of people test positive with 714 cases. On Tuesday, there were zero new cases reported. 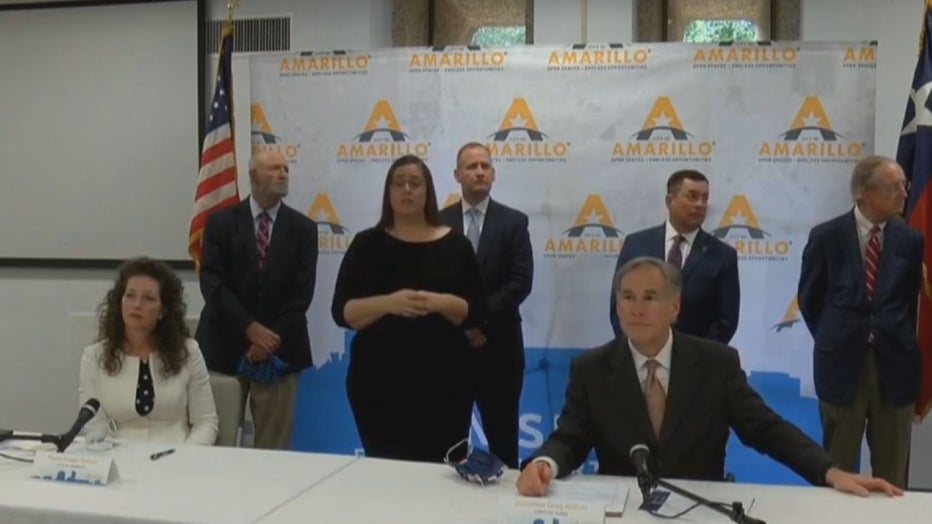 “As we go about this opening up process, we realize there could be spikes like what we've seen in Amarillo,” Gov. Abbott said.

The state said the spike was detected as it ramped up testing as part of its surge response to the area.

The governor said the surge response strategy will be important in reopening.

“What this strategy does is, it allows us as a state to keep under control any of these flare ups of COVID-19,” he said. “And in doing so, that allows that state as a whole to be able to open up business even more and allow people to return to work.”

The governor also talked about viral videos showing packed bars, as they were just allowed to open Friday at 25 percent capacity.

“TABC has authority to suspend the license of one of these establishments, if they do not comply with the law,” he added.

The governor said he believes the counties are ready to enter phase two of the plan to reopen the state at the end of the week.

The 130-member surge team and a team from the CDC are still in Amarillo for the time being.

The governor said Amarillo is an example of how Texas would respond and knock down hot spots during the pandemic.

The court - filled with nine Republican justices – ruled that the lack of immunity to the virus doesn't qualify someone to cast a ballot by mail.

“In anticipation of a ruling like that, I made sure that early voting was going to be extended so that people would have extra time to vote early in ways that would reduce their contact with others, and hence, reduce the possibility of contracting or spreading COVID-19 during the voting process,” Gov. Abbott said.

While the chair of the Texas Democratic Party blasted the move, writing: “Now, unless the federal court steps in, because of the Texas Republican Supreme Court, voters will have to either risk standing in line and contracting the coronavirus or they’ll risk prosecution by indicted Texas Republican Attorney General Ken Paxton and his grand juries for simply requesting a mail-in-ballot.”