In a statewide address, Governor Greg Abbott called for mandatory changes to the machines that generate power across the state.

That means preparing all of them for the potential for winter weather.

Many were not prepared, and they stopped working, causing a ripple effect that led to millions in the dark.

Speaking from the state's emergency operations center, Gov. Abbott called for the overhaul of ERCOT, of which five board members who didn't live in Texas have already resigned.

Meanwhile, some state Democrats say the governor is ignoring the role of an oversight commission, in which he appoints members, to distract from his role in the matter.

With Texans still out of water and a mountain of cleanup ahead, Gov. Abbott addressed the frustration over the electric grid’s failure that left millions of Texans in the dark and in the cold last week.

"Many of you are angry, and you have a right to be. I am angry, too," he said. "At a time when essential services were needed the most, the system broke." 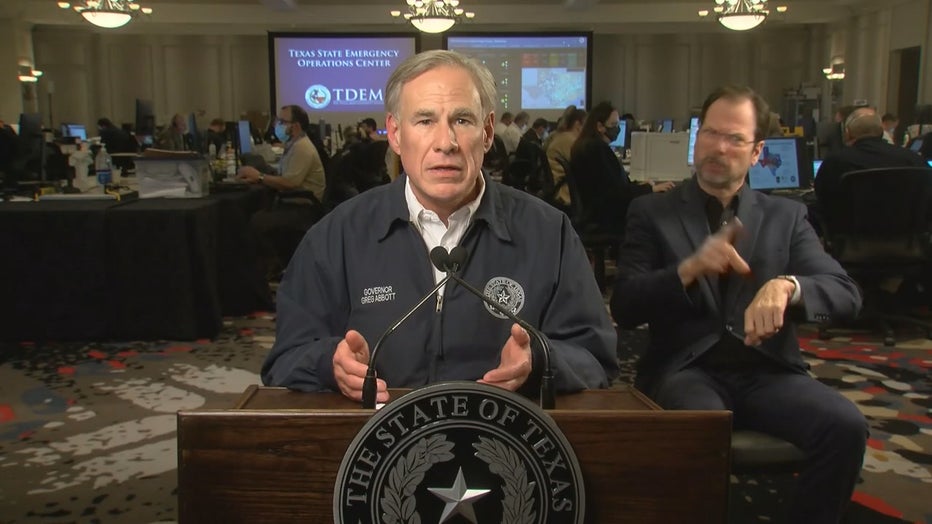 Governor Abbott, again, is taking aim at ERCOT, which manages the electric grid for most of the state.

In an emergency board meeting early Wednesday, ERCOT officials revealed they were four minutes and 37 seconds away from a complete blackout.

"If we have a blackout of the system, the system is out for an indeterminate amount of time and it’s extraordinarily difficult to bring it back," said ERCOT CEO Bill Magness. "We may still be here today talking about when is the power going to come back on if we had let the system get into that condition."

But the outages were intended to roll from one neighborhood to the next. We now know that didn't happen.

ERCOT says the reduction in power was so steep that transmission companies couldn’t roll the outages without affecting critical infrastructures, like hospitals. It failed to immediately communicate that to the public.

Gov. Abbott also criticized ERCOT, saying it assured the state before the storm that the system would hold.

"We now know that power generators of all sources were not prepared for this," Abbott said.

But the state doesn't require power companies to prepare for extreme winter weather. ERCOT can only make recommendations.

The Public Utility Commission, which oversees ERCOT, says it also can only make recommendations. A spokesperson told FOX 4 the responsibility lies in the state legislature.

"[Thursday], the state legislature begins comprehensive investigations of ERCOT," Abbott said. "And I am already working on reforms to add more power to the grid and ensure that we never run out of power again."

State Rep. Ana-Maria Ramos (D-Richardson) is asking the governor to testify before a House hearing Thursday investigating the failure.

"Everyone is mentioning ERCOT, and ERCOT as the Reliability Council of Texas. There was a failure there. But when you dig a little deeper, you realize it’s the PUC, the Public Utility Commission that oversees ERCOT," she said. "Gov. Abbott, he made those calls. He made those calls to appoint the Public Utility Commission who should have overseen ERCOT to make sure there was enough. That this failure wouldn’t happen."

Don't expect to see the governor there. He's scheduled to be in Corpus Christi talking about vaccine distribution.