Texas Governor Greg Abbott said the COVID-19 vaccine will be available to more people within the next week as the Lone Star State gears up to lift mask mandates and re-open businesses to full capacity.

Texas Governor Greg Abbott said the COVID-19 vaccine will be available to more people within the next week as the Lone Star State gears up to lift mask mandates and re-open businesses to full capacity.

In a news conference in Tyler, the governor said he’s expecting an announcement in the coming days of more tier groups next up for the vaccine.

This week, teachers, school employees, and childcare workers got the green light to get the COVID-19 vaccine, now other groups of essential workers are eagerly waiting for their turn.

"Over the past week, we’ve administered over 1.2 million vaccines. We’re averaging well over 150,000 vaccines per day," Gov. Abbott said.

As Texas gears to fully re-open many businesses next week, Gov. Abbott said the state is well on their way to fully vaccinating seniors in group 1B.

"When we open up next Wednesday, more than 50% of seniors will have already received a shot. We’re never going to get to 100% of any category because there’s always going to be people who decide, I don’t want a shot. Once you get to about 70-75%, you pretty much have completed that tier," the governor said.

Abbott said by the end of March, any senior who wants a shot should be able to get one.

So far, Texas has administered more than 6.3 million vaccines, and more than 2.2 million Texans are fully vaccinated.

That’s about 7% of the population that’s fully vaccinated.

More than 1 million COVID vaccines will be distributed across the state next week, including more than 245,000 of the new Johnson & Johnson single-dose vaccine. 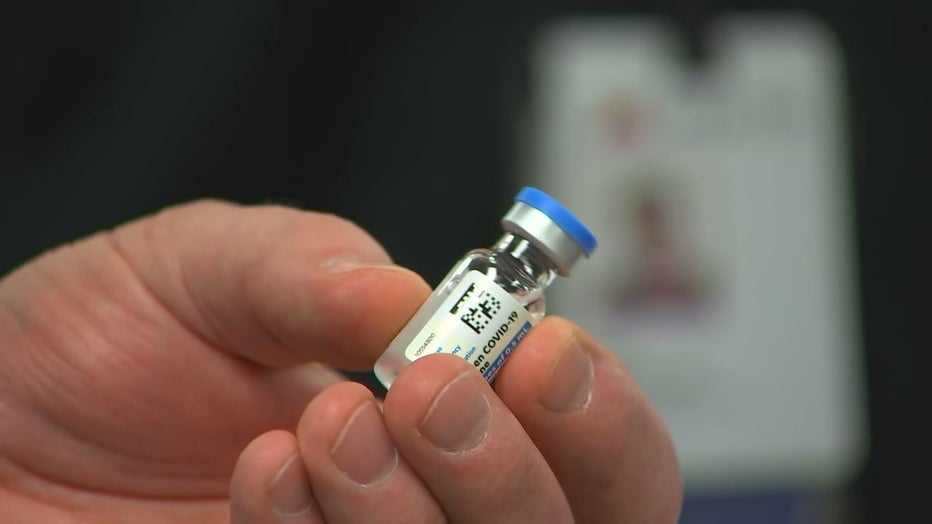 Governor Walz holds a dose of the Johnson & Johnson vaccine as shipments arrive in Minnesota.

Now, the state’s vaccine allocation panel is looking to which other groups could be next.

"I am told to expect some kind of announcement maybe [Friday], maybe next week, about the next opening up of additional tiers of people who would be eligible," Abbott said.

This week, educators and childcare workers got the news they would be next up for the vaccine.

Some were able to start scheduling appointments as soon as Friday.

But grocery store, food, and other frontline essential workers are still waiting.

The union, United Food and Commercial Workers (UFCW), has been fighting for access to the vaccine since the start, as grocery store and other food industry employees never stopped working during the pandemic.

"Food workers, for some reason, we’re the forgotten folks, and it shouldn’t be that way," said Johnny Rodriguez, president of UFCW local 540. "We’re essential workers and I don’t see why they would put us in a different category, we should’ve already been given the opportunity to get vaccinated."

UFCW 540 said they’ve been in contact with the county, and the organization as a whole has been talking with the state about being next to get the vaccine.

"Here seems to be a degree of confidence. We’re going to be in that next group, but nothing really official," Rodriguez said.

But the governor said those not in any of the tiers will not have to wait much longer until the vaccine is available to everyone.

That might not happen until the end of May.

"I think it would give us a reprieve, it would be like a second chance at and trying to gain back normal life," Rodriguez added.

There’s still no time table on exactly when we might be expecting that announcement on who’s next.

The governor only said before mask mandates and capacity limits are lifted.