A Garland 19-year-old diagnosed with stage 3 breast cancer is speaking out after a doctor originally told her the tumor was benign.

GARLAND, Texas - A Garland 19-year-old diagnosed with stage 3 breast cancer is speaking out after a doctor originally told her the tumor was benign.

She hopes speaking out could help prevent someone else from being misdiagnosed.

It is unusual for a teenager to get breast cancer, especially without a family history. But Cameron Melton wants everyone to know it can always be a good idea to get a second opinion.

It was in the middle of the pandemic last summer right after a senior year under lockdown that then-18-year-old Cameron Melton went to a specialist to get the lump checked out.

"They did an ultrasound and said it is fibroadenoma. You’re good" she recalled. 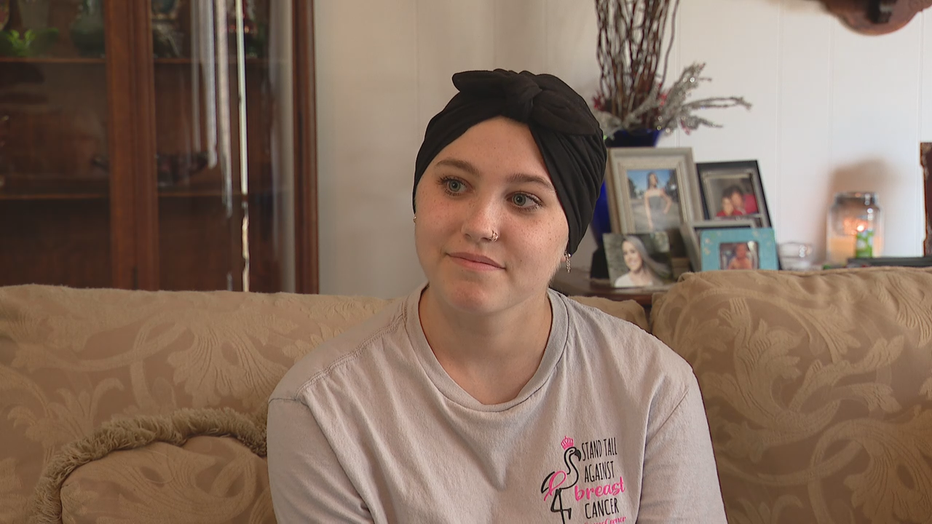 Fibroadenoma is a benign breast tumor. The doctor told Melton there was nothing more she could do at the time. But it turns out the lump was not benign. It grew for six more months unchecked.

"December-January, it got hard and heavy and took up most of my breast," she recalled. "And I thought, ‘I don't think this is normal. I don’t think fibroadenoma grows that much.’"

An appointment with a surgeon confirmed those fears.

"Just by feeling it, she said, ‘I don’t think that's fibroadenoma because it didn't move and was pretty hard,’" she recalled.

On Jan. 18, Melton was diagnosed with stage 3 triple-negative breast cancer.

"Triple-negative is very aggressive and rare," she said. "It grows a lot. Fast."

Eight rounds of chemo succeeded in shrinking the tumor in Melton’s breast and another tumor in her lymph nodes. They were then removed. Tuesday marked her first day of radiation.

Melton says she’s struggled with losing hair and found her wig to be uncomfortable.

Metlon has continued her college classes through it all. Her dream is to teach elementary school students.

"It has been a nightmare. Cameron makes us stay calm. No crying," said her mom, Meredith Melton. "I would fall apart without that."
Melton’s mom hopes that telling her of the importance of a second opinion and taking action quickly will save someone else's life.

"I felt like I failed her," mom said. "She was responsible enough to find it, and we did not follow up. And we should have."