A man who escaped from prison last November ended up in a skirmish with police, who confronted him after he came out of hiding to buy a popular new video game, authorities said. (Credit: West Midlands Police via Storyful)

BIRMINGHAM, United Kingdom - A man who escaped prison last November came out of hiding to buy a video game and attacked officers when he was confronted, police say.

It happened on Jan. 13 when an officer stopped the man to ask him why he was traveling during the COVID-19 lockdown.

Officers Mark Owen and Allison Brown said when they spotted the 36-year-old, he and a friend quickly changed direction and walked the other way.

Police caught up to them and asked why they were out and about amid the lockdown. They said the man gave them a fake name and told them he’d "come to get the new Call of Duty because I can’t sit around in lockdown." Little did they know, the man was a fugitive who had escaped prison just a few months prior. 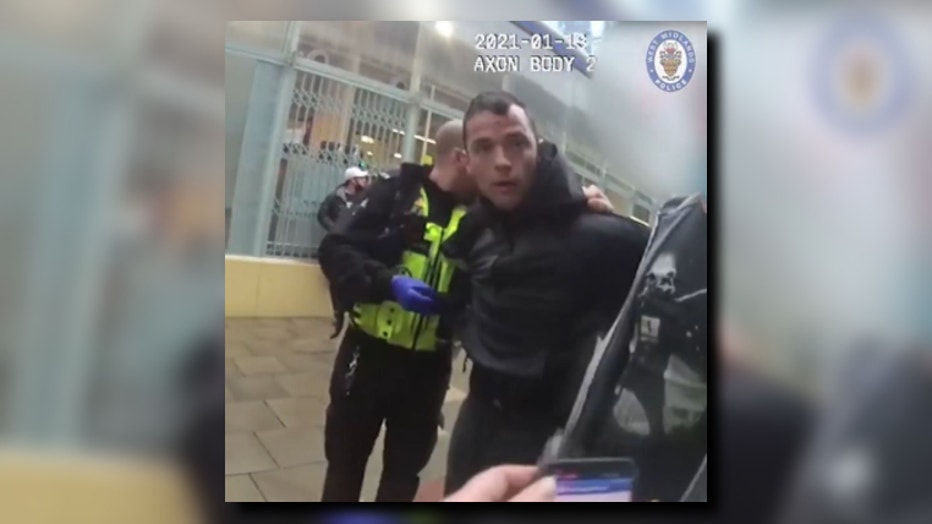 A man who escaped from prison last November ended up in a skirmish with police, who confronted him after he came out of hiding to buy a popular new video game, authorities said.(Credit: West Midlands Police Department)

Clint Butler was supposed to be serving a 17-year extended sentence for robbery and firearms offenses, according to a news release, when he escaped.

Officers remained suspicious of the friends and said they’d need to check the pair’s details. At that point, body camera footage appears to show Butler kick Owen in the groin and slip on the pavement while trying to run off.

A struggle broke out as both officers tried to restrain the suspect. At one point, Brown received a fist in her face and became pinned underneath him, police said.

Their cries for backup reached the ears of nearby security officers, who raced over as Owen and Brown held the suspect.

"This was great work by our officers, acting on instinct that there was something not quite right and then challenging the men," Supt. Nick Rowe said. "The situation escalated really quickly, but both PCs put their training to good effect by restraining Butler, subduing him and getting him safely in handcuffs, while also calling for back-up from officers nearby."

Butler’s original sentence was set to expire in 2024. But the courts have since tacked on 13 months for escaping prison and six months for assaulting officers.

Those sentences are to be served consecutively, police said.

"Quite why he decided to risk being returned to prison by making the idiotic decision to come into town during lockdown with a friend to buy a video game will remain a bit of a mystery," Rowe said.