Southwest Airlines has a lot of angry and frustrated customers after their weekend plans were affected by thousands of flight cancelations. And getting on another flight will not be easy.

Some have pointed to new COVID-19 vaccine mandates, bad weather, protests and old internal technology. So which is it?

Southwest Airlines maintains air traffic control problems and bad weather were to blame for the cancellations. But the pilot's union said the airline is deflecting and blames what the president calls an antiquated IT system.

The airline issued a statement Sunday night saying it was working to recover its operations, but that customer service wait times would be longer than usual.

Southwest trying to bounce back after delays, cancellations

Southwest Airlines has a lot of angry and frustrated customers after their weekend plans were affected by thousands of flight cancelations. And getting on another flight will not be easy.

According to FlightAware.com, Southwest has already canceled 9% of its flights systemwide, which translates to about 325 flights.

FlightAware.com reported Southwest canceled more than 1,000 flights on Sunday alone and had 808 cancelations on Saturday.

"Haven’t seen our bags for two days. We’ve been in the same clothes for 48 hours," said Lorielle Dean, a traveler in Phoenix.

One man FOX 4 spoke to had his flight to New York’s LaGuardia canceled. He was hoping to catch a later flight on Monday morning.

"At least I live here. So. if anything, I don’t have to go back to a hotel and wonder when I’m gonna get home. So, I can always go home if I have to go another day," Jason Lorance said.

Nearly 50% of the airline’s fleet was either delayed or canceled on Monday. In a statement released Monday afternoon, Southwest said many problems are due to out-of-place aircraft and a strain on resources.

Renee Acker’s original flight to Lubbock was Sunday, but it was canceled.

"Been trying to get home all day today because I had a 9 a.m. flight this morning," she said. It’s 5:10 in the afternoon and I’m still here."

Acker has thought about making the five-hour drive, but she can’t get a car.

Nichole Gambulos, a teacher from Garland, is stuck in Orlando after planning to fly home from Disney this weekend. The next available flight for her family is Wednesday.

After Texas-OU weekend, Russ Melchert resorted to renting a U-Haul to get home.

"Hopped in that and drove nine hours and got back to Kansas City last night," he said. 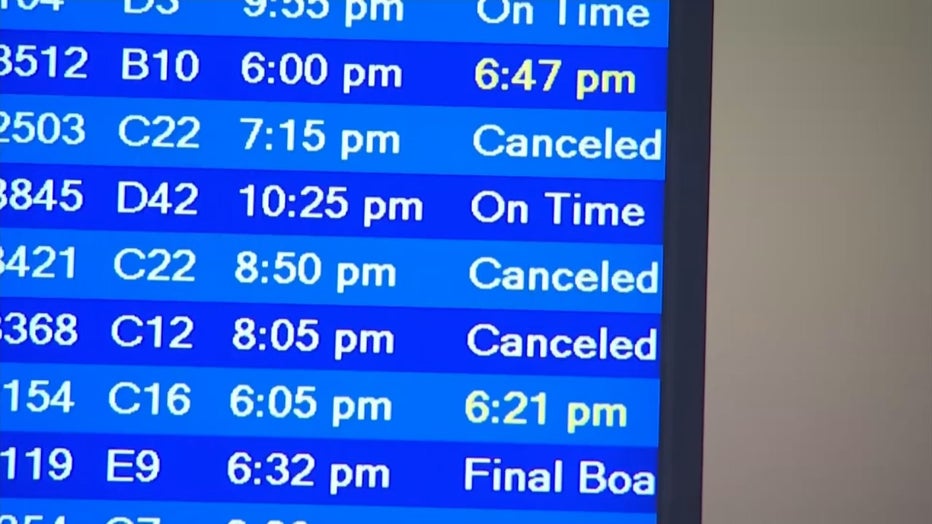 In a statement, the airline is placing the blame on air traffic control issues and disruptive weather.

However, a Federal Aviation Administration spokesperson is offering a different view from the airline, saying the air traffic control issues ended on Friday.

RELATED: Southwest Airlines, FAA differ over cause for cancellations

The union also speaking up.

He said the cancellation problem is due in large part to internal processes that includes an antiquated IT system, which can cause a domino effect.

About 71% of the pilots on Saturday were reassigned from their original schedule," Murray said. "That is an unbelievably high number. Sunday, it was 85%. That's not sustainable."

For those Southwest Airlines passengers currently stranded, many are choosing to book on another carrier or drive — no matter the cost.

There are conflicting reports about what caused Southwest Airlines to cancel nearly 2,000 flights over the weekend. It's left thousands of passengers stranded and trying to get rebooked on flights.

Last week, the Southwest Airlines pilots’ association filed a motion to block the airline’s COVID-19 vaccine mandate for pilots. But the association issued a statement over the weekend saying it had no connection to any of this weekend’s fight delays or cancelations.

In that same statement released by Southwest Sunday, the airline expressed appreciation for its customers’ patience. It did not specify how long it expected to have delays and cancelations.