You expect technology to work for you and not against you. However, some people say new websites created by tow truck operators are leaving them feeling targeted right where they live.

However, some people say new websites created by tow truck operators are leaving them feeling targeted right where they live.

FOX 4’s investigation looked into the new requirement for online parking registration. And we got the attention of one Texas lawmaker.

Apartment renters can't believe their guests are being required to not only pay to park but are also expected to register their cars through a website or smartphone app. FOX 4 discovered entering one wrong letter will result in a car being towed for a $300 bill.

Residents at Tri Pointe Square Apartments in Mesquite say they have felt like prisoners in their own homes. Their apartment complex started to require their guests to register their cars with a website called ‘Parking Badge.’ Then their guest must submit a payment to park.

“I pay $10.15 I feel like I should be able to have visitors,” said resident Tryhonda Coleman.

But even after some people registered online and paid to park, they were still towed.

Coleman's cousin visited in September. She registered online through Parking Badge and submitted a payment to park. But 30 minutes later, her car was towed.

“Moment she seen them, they already had her car up,” Coleman said. “She followed them to the place.”

It turns out Coleman's cousin had entered one wrong letter from her license plate. She sent screenshots of her registration to the tow truck operator — which is owned by Texas Parking Authority, a company not associated with Parking Badge. 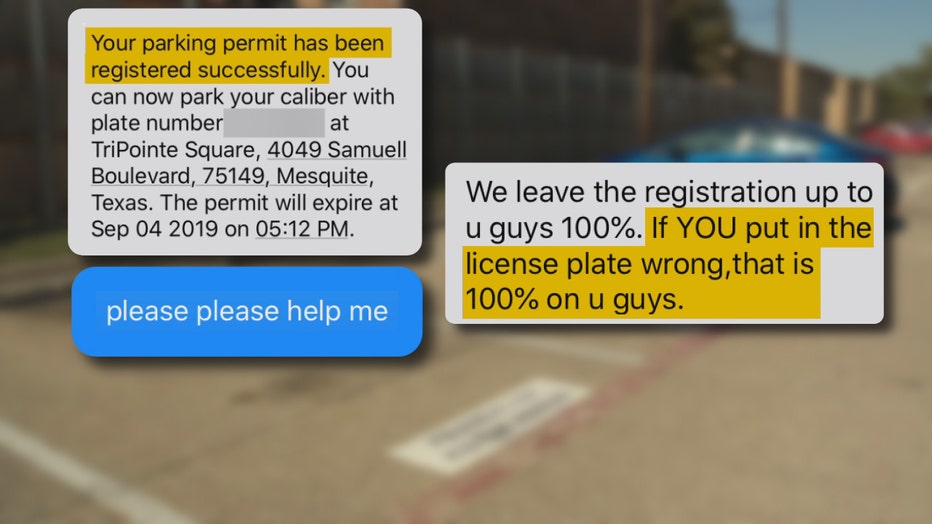 In the screenshots, Coleman's cousin circled the keypad to show how close the letters ‘B’ and ‘H’ are and pleaded for them to help her.

The response from Texas Parking Authority: “If you put in the license plate wrong, that is 100 percent on you guys."

The same thing happened to Nokesa Gillum. Even after showing the tow truck driver her one-letter mistake, she still had to pay hundreds of dollars to get her car back.

“Sometimes you have spell check on your phone. So if you type something in, it will auto-correct what you’re typing,” Gillum said. “So if I type in my license plate number and it corrects one letter, then they tow our cars anyway.” 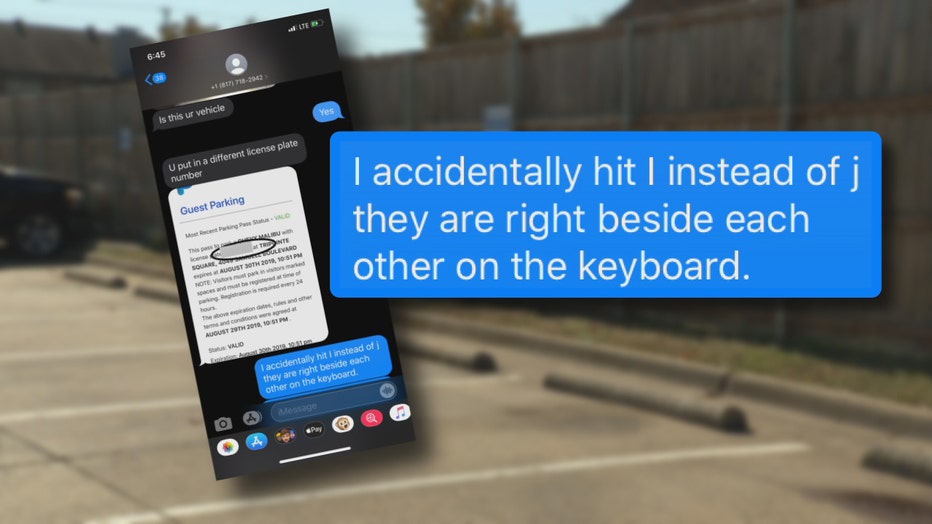 The cars are being towed to an impound lot owned by Sure Storage.

Here is an interesting connection: state records show the registered agent and manager of Parking Badge is also the president of Sure Storage, Aaron Huhem.

Aaron also owns his own company called Black Bull Towing, which did not tow any of the car is in this report. But the company has been fined more than $59,000 by the state for unauthorized tows. 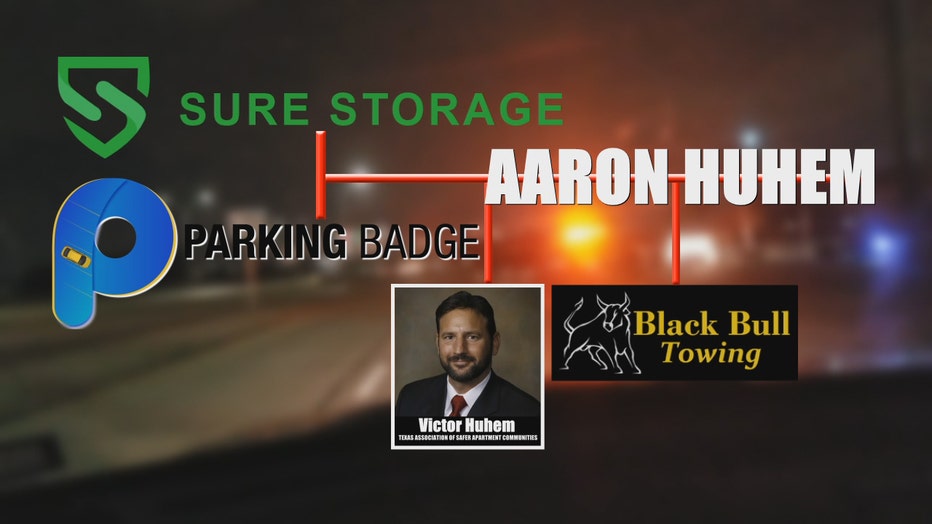 Victor was grilled by state lawmakers in April.

Rep. Collier: "In fact, Black Bull Towing is owned by your brother?"

Victor: "That is correct."

Rep. Collier: "You said you want this because you have a personal interest in this."

Victor: "I represent probably about 500 apartment properties. About ten percent of them — depending on what their needs are — use the program where the residents come in each month."

Victor’s organization started a program where temporary parking passes were issued to residents. He claimed the passes made the communities safer.

“99 percent of the time when there is crime and things going on at the property, it's caused by people that aren’t supposed to be there,” Victor told lawmakers.

But after complaints, low-income residents felt targeted. Lawmakers found forcing residents to get new parking passes each month or be towed put an unnecessary burden on legitimate residents. 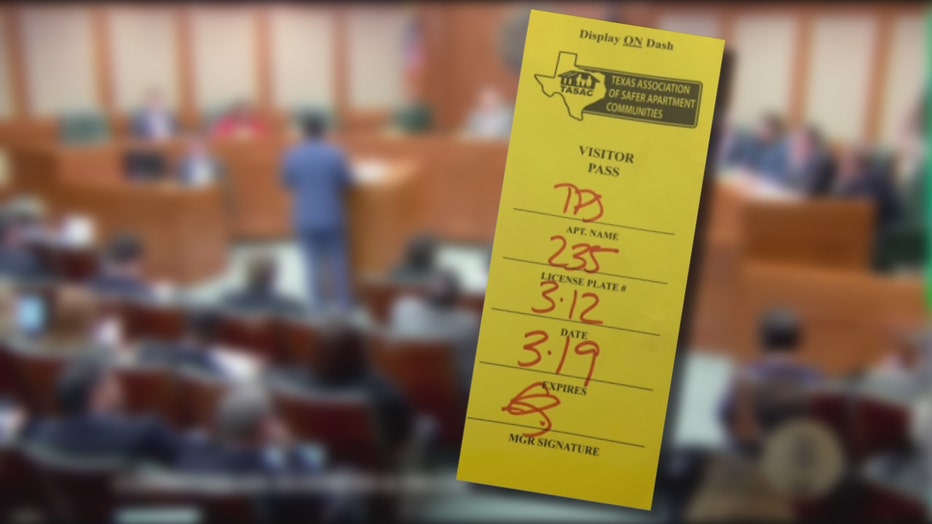 “We said we thought it was unconscionable to have that type of practice in the state of Texas,” West said.

“This is an unnecessary and cruel add-on,” Rollins said. “It almost feels like we are playing whack a mole with these towing companies. You solve one problem, and then they come up with another.”

FOX 4 tried multiple times to reach Aaron Huhem, but he did not return any calls or emails.

Under ‘Contact Us,’ the Parking Badge website lists a Fort Worth address, which turned out to be an apartment complex called La Jolla. But when FOX 4 was there at 4 p.m. the office was closed, even though the hours online for the address are 9 a.m. to 5 p.m.

The La Jolla address is the same one listed for the Texas Association of Safer Apartment Communities.

In a statement emailed to FOX 4 from Parking Badge, an unnamed person wrote: "Parking Badge does not offer parking enforcement or towing services. Property owners must obtain a third-party vendor for such services."

But FOX 4 found right next to the Parking Badge signs at Tri Pointe Square are signs to get towed cars picked up at Sure Storage.

Sure Storage and Parking Badge are both operated by Aaron Huhem.

When FOX 4 visited Sure Storage, no one came to the door. Also, no one answered the phone number that says it is available 24 hours.

And no one answered FOX 4’s calls to the office at Tri Pointe Square Apartments on different days and times. While FOX 4 was there interviewing tenants at the complex, an employee asked our crew to leave. No one responded to our request for an interview.

FOX 4 asked West if something should be done to protect apartment residents.

“Thank you for putting a spotlight on this because we thought we had fixed the problem when we passed the law, but apparently they are deciding to try to go around it,” West said. “Well, let me be real clear about it. You're not going to get around it. The fact of the matter is I’m hoping we can work with the cities where this practice is starting to pop up and look at doing something about it.”

If not, people say it could be crippling.

“That’s torture,” Coleman said. “To be a resident, you’d want some kind of common courtesy.”

Anyone who thinks they’ve been towed improperly or unfairly should file a complaint with the Texas Department of Licensing and Regulation. A complaint with TDLR can be filed at any time.

But until the law catches up, the people in the examples FOX 4 just mentioned have no real recourse.