The final two candidates for mayor of Fort Worth laid out their case in a virtual forum.

FORT WORTH, Texas - The final two candidates for mayor of Fort Worth laid out their case in a virtual forum.

"I want to create a ‘one’ Fort Worth where everybody is valued and everybody is listened to," Peoples said in the forum.

"It is time to take off," Parker said. "We can’t afford to be a bedroom community to Dallas anymore." 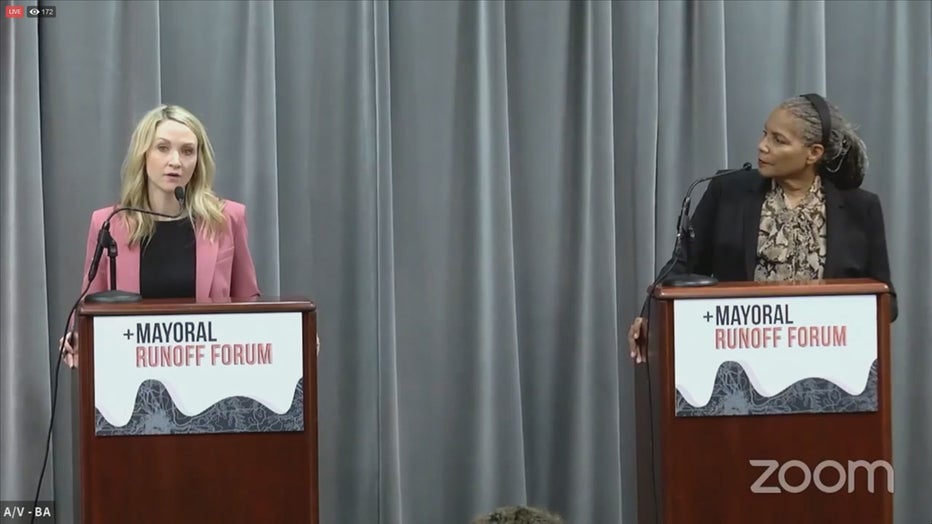 Their viewpoints in a virtual forum Wednesday touched on transportation goals and other topics, including a more diverse city workforce.

Affordable housing, moving more people from apartments to homeownership and economic equity for areas like the city’s north and east sides.

"We have that whole Lancaster corridor that is underutilized," Peoples said. "We have huge tracts of land where we could put housing, and that’s the city job and my job as mayor to help sell these builders on why they should build in these communities."

"Access to mortgages, access to capital, access to opportunities to be homeowners," Parker said. "We understand the generational gap that exists between black and Latino families because of homeownership. What are we going to do to be a responsible city government to make sure these opportunities are available to all people in the city of Fort Worth?"

Peoples has a background in corporate leadership and as Tarrant County’s Democratic Party chair.

Parker, an attorney, has served the Fort Worth city government, including as chief of staff for Mayor Price.

Both addressed mass transit as a pressing concern. Light rail and its more than $2 billion price tag highlight their differences of opinion.

"We need light rail around the city," Peoples said. "It’s great that we have it to the airport. I’ve ridden it, but light rail is contingent on getting people. We need to get people to work via light rail, and we can’t just piece part it."

"I’ve been proud of Trinity Metro setting up and doing programs like zip zones with Villa and others to get people around this community quickly," Parker said. "Because those communities cannot wait 10 to 20 years for our light rail system to serve them."

Both candidates agree a more diverse city workforce is needed. They disagree on how to achieve it.

"Talent attraction is key, especially in a municipality, especially when the job market is really stiff right now and people can go work anywhere," Parker said. "I think the move to the Pier One building for City Hall will be incredibly exciting."

"You have extraordinary talented people working at City Hall right now who don’t feel valued and have not been allowed to progress up through the ranks. So this is not about attraction," Peoples said. "I’m so tired of people saying we can’t find qualified minorities for these jobs or qualified women. They are there."