Reports of gunfire brought a major police response and panicked parents to an Arlington school Thursday afternoon. It turned out to be fireworks set off inside Carter Junior High.

It turned out to be fireworks set off inside Carter Junior High.

This is the second false alarm this week involving fireworks. On Tuesday, Duncanville High School was evacuated because of a firecracker.

Carter Junior High was on lockdown for nearly two hours Thursday afternoon after police got a call about possible gunshots heard on campus.

After officers responded to the scene, they were able to determine that someone had lit fireworks inside of the school.

Arlington police have opened a criminal investigation and are trying to find the student or students responsible.

Police got the call from a school resource officer at about 12:30 p.m.  The officer said he saw students running and screaming after they said they heard a gunshot.

There was a second call, believed to be from a teacher, who said they heard fireworks.

They found no active shooter, no guns, and no one injured. 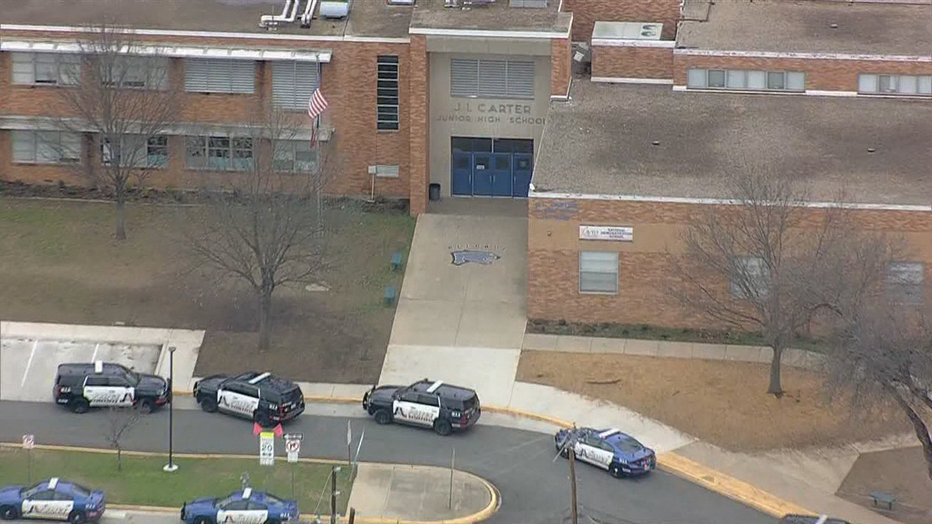 Just after 2 p.m., police determined the loud bang had come from a student setting off fireworks inside of the building.

Cristian Alvarado said he was in gym class when he heard what sounded like a gunshot.

He started to run when a teacher ushered him and several other students into a storage closet.

“They just told me to take deep breaths and to keep calm and they told me, ‘If you want to text your mom, you can text her to say that you’re safe with us,’” he said.

“Some SWAT team just told us to stay there until we find out who it is,” student Christian Soto recalled.

Sgt. Michael Chitty said it is a serious offense and charges will be filed against the student responsible when they are found.

This incident comes just two days after students at Duncanville High School were also placed on lockdown due to firecrackers going off on campus.

Arlington police responded to this situation as they would if there were a shooter on campus.

They are urging parents to remind their children that it’s not funny to make any threats - fake or real - and they will be taken very seriously.