It’s a walk to raise money and awareness about the health risks firefighters endure.

CELINA, Texas - Some North Texas firefighters, along with families, are walking together to raise awareness to cancer.

Their mission is called Walk for the Red 140.

It’s a four-day trek, with many firefighters traveling in their full gear.

They're walking in support of firefighters who have lost their lives to cancer and those who are battling the illness.

It’s a walk to raise money and awareness about the health risks firefighters endure.

The hope is for their journey to resonate far beyond the miles they cover.

"This is a big deal. We are 17% more likely to get cancer than any other occupation," said Jarrett Beshears, with Plano Fire-Rescue.

Firefighters united for a walk to raise awareness about a killer.

"This is very personal to me. Yes, we get to meet a lot of our brothers and sisters battling cancer, and it’s very sad to watch what they go through," said Joseph Warren, who is a firefighter in Macomb Township, Michigan.

"We are walking 140 miles in four days for firefighters with cancer or who have passed away from cancer. So we are raising money and awareness," Beshears explained. 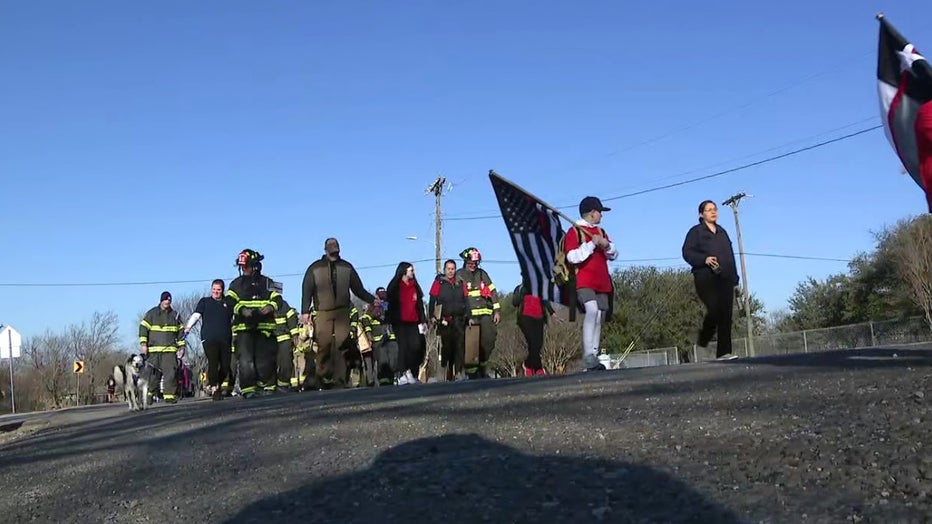 The town of Celina is where firefighters and supporters started their 140-mile journey on Thursday, which ends Sunday in Plano.

There are stops along the way in Whitesboro and Sanger, with firefighters explaining the risks they face.

"Then the off gassing that our gear does right when we get out of a fire. The first thing we do when we come out is take her mask off, well we are inhaling all of the bad gases, so there are ways to help prevent that. It’s just a matter of teaching it," Beshears said.

The idea began with a group of firefighters in Michigan. Warren, who is a native North Texan, was one of them.  He’s mourned the loss of a captain and other firefighters.

He spearheaded a walk in that state, and this year encouraged the same mission in his hometown.

"Now we are here and we’ve built an incredible team here in Texas," he said. "And all of you are part of the team because of the brotherhood. We can’t do anything alone."

They are walking to honor 11 local firefighters who are battling cancer or who have passed away.

"We just want to make sure their names and their memories are impressions on our minds every day, not just one day out of the year, or just a week or a month, so that’s our goal during this walk," Beshears said.

Click here for more information on how to donate.

READ MORE: Crews work to put out fire at vacant building in Dallas