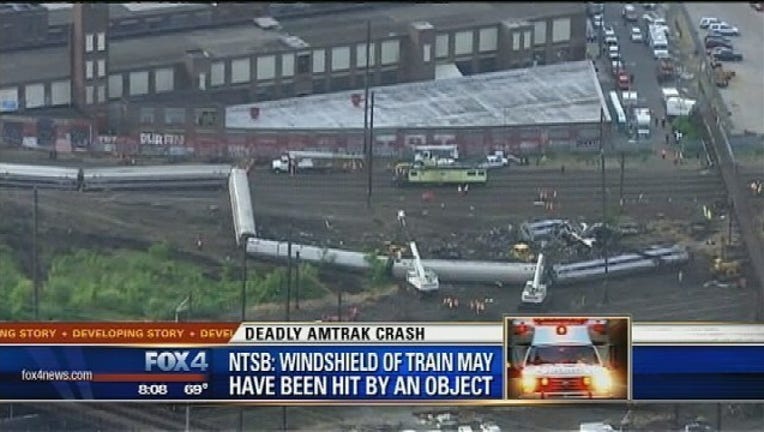 PHILADELPHIA (AP) -- The FBI has been called in to investigate the possibility that the windshield of an Amtrak train was hit with an object shortly before the train derailed this week in a crash that killed eight people and injured about 200 more.

The revelation came at a National Transportation Safety Board briefing on Friday evening, raising new questions about the accident. NTSB board member Robert Sumwalt declined to speculate about the exact significance of a projectile, but the idea raised the possibility that the engineer might have been distracted, panicked or even wounded in the moments before the train left the rails.

The train sped up to twice the speed limit when it was supposed to be slowing down as it entered a sharp bend in the tracks on its way from Washington to New York.

The NTSB said the FBI will focus its investigation on the windshield of the train.

Sumwalt said the information about a projectile came from an assistant conductor, who said she heard Amtrak engineer and the engineer from a nearby Southeast Pennsylvania Transportation Authority regional train talking just before the derailment. Sumwalt said she recalled hearing the regional train driver say his train had been hit by an object and then Brandon Bostian, the Amtrak engineer, say his train had been struck, too.

The derailment shattered the Amtrak train's windshield. But Sumwalt said there were concentric circles on the lower left corner of the glass.

The NTSB said there also was another Amtrak train -- this one headed south -- that had a window shattered in the same area around the same time.

Investigators have been looking at why the Amtrak train that crashed hit a speed of about 106 mph in a zone where the maximum speed is 50 mph just before it flew off the tracks.

On Friday, the NTSB interviewed Bostian, the 32-year-old engineer, for the first time.

Sumwalt said Bostian was "extremely cooperative" but told authorities that he did not recall anything in the few minutes before the crash, the deadliest on U.S. rails in nearly six years.

But Sumwalt said the engineer told investigators he was not fatigued and that he was not concerned about how the train was working.

The stretch of track is not yet equipped with a positive train control system that would put the brakes on a train exceeding the speed limit. That means that for now, engineers have to rely on their knowledge of the tracks and a printed timetable rather than sophisticated signals to tell them when to slow down. Amtrak said it will have the new control system on all its tracks by the end of the year.

Sumwalt said Bostian had "a very good working knowledge of territory, speed limitations, things like that."

Before the news of an object possibly hitting the train, Ed Dobranetski, the NTSB's former chief railroad crash investigator, said there would be many questions for the engineer because of the abrupt speedup. "It doesn't accelerate by itself. It doesn't go into cruise control," Dobranetski said. "Somebody's got a lot of explaining to do."

James Weir, a friend of Bostian's since they were teenagers in the Memphis, Tennessee, area, said he called the engineer after hearing about the wreck, but that his friend was hospitalized and could not say much. As a teenager, Bostian was a safe driver who would not go even 5 mph over the speed limit, he said.

"Whenever I would drive, I'd tend to go a little over and he'd fuss at me. He'd tell me to slow down. He's just not the kind of guy that breaks the rules," Weir said. "He puts safety ahead of everything."

On Friday, the first funeral was held for one of those killed in the wreck. U.S. Naval Academy midshipman Justin Zemser, 20, was laid to rest on Long Island.