A barbecue was held to raise money for the family of fallen Mesquite PD Officer Richard Houston.

MESQUITE, Texas - It's been four months since a shooting in a grocery store parking lot shook the city of Mesquite.

Officer Richard Houston was shot and killed while responding a disturbance call, and though time has passed, the community gathered Saturday to show that his sacrifice is not forgotten.

It’s still difficult for some in the Mesquite community to grasp that Houston was shot and killed while in the line of duty last December.

"My first thought was, not Richard," recalled Benny ‘Big Ben’ Bruner. "Just a great guy. Funny guy. Knew him and his wife, Shelley, before they ever got married, had the kids."

"The only thing we caught that day was a turtle," he said. "Richard got it. I got a picture of him bent over in a boat holding that turtle."

"He could imitate Jim Carrey, and if you didn’t see him, you’d swear Jim Carrey was in the room with you," Bruner said.

And while Houston is no longer with us, people are taking action to help his family.

"I want to do it to help Shelley. I can’t imagine what she’s going through," Bruner said. 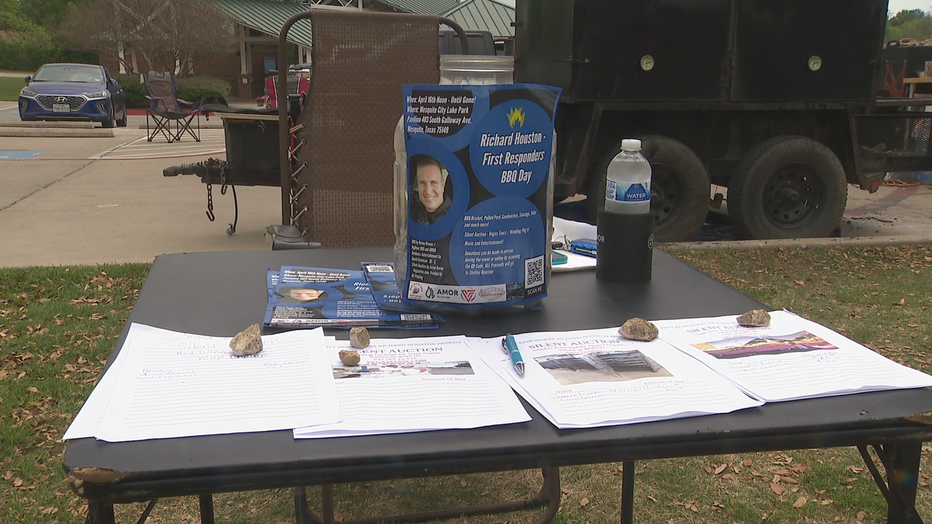 "Just wanted to do something for not only him, but the family," said Michael Paul.

Paul’s son plays baseball with Houston’s son. They now wear his badge on their uniforms.

"There’s a lot of support at the baseball games," Paul said.

"It’s something special, because it just shows how much the community still supports us," Mesquite Police Department Captain Stephen Biggs said.

Police believe 37-year-old Jamie Jaramillo, who was reportedly caught in the middle of a love triangle by his wife, killed Houston in an Albertson’s parking lot while the officer responded to a disturbance.

Jaramillo has been charged with capital murder.

The deadly shooting of an officer is rare in Mesquite.

"It hasn’t happened in Mesquite for 47 years, and when that happened on December 3, it was jarring for us," Biggs said.

While a cookout might not seem like much, the idea behind it is of gratitude and appreciation for Houston and officers.

"So I think it’s important to have continued support," Paul said.

The money raised will go to Houston’s family, who no longer have their loved one, but they have a community that cares about them and will never forget his sacrifice.

"He was just a great husband. A great father," Bruner said. "Richard gave his life for the job he loved and the people to protect. You can’t ask for more."