Procession held for fallen officer Friday night, as his body was transported from the hospital to the medical examiner's office.

MESQUITE, Texas - A Mesquite police officer was fatally shot in the parking lot of a grocery store Friday afternoon.

Police said the officer, a 21-year veteran, was shot twice outside an Albertsons in the 1500 block of S. Belt Line Road after responding to a disturbance call just before 1:45 p.m.

Few details have been released at this point, but police said the officer and a suspect were both struck during an exchange of gunfire after the suspect pulled out a gun.

That officer and the suspect were taken to Baylor University Medical Center in Dallas in critical condition. The officer later died from his injuries.

It shook a lot of people in the area, especially those who witnessed part of what happened.

This happened in a busy area, outside a grocery store that would have had a lot of shoppers at the time.

Police spent the afternoon checking to see if there is surveillance video and talking with at least one witness.

Police have not yet shared what led up to that disturbance call that ended with a veteran officer killed.

Mesquite Police Chief David Gill got choked up when confirming the death. Gill was surrounded by numerous officers as he broke the news to the public and reporters Friday evening.

Mesquite officer dies from injuries after being shot outside grocery store

Gill said the officer was a husband and father of two. He also asked the community to pray for the officer’s family.

"This was a senseless act of violence that ripped a loving father and husband from his family," Gill said. "He was a 21-year veteran of the Mesquite Police Department. A good man, a good friend, a good officer. Please keep his family and our family in your prayers."

The name of the officer has not yet been released.

The suspect is still alive and in the hospital. His name has also not yet been released.

Gill said more information about the investigation would be released throughout the weekend.

There was a heavy police presence outside the entrance of the emergency room. Mesquite police officers and Dallas officers, including Chief Eddie Garcia, showed their support, along with officers from other local agencies.

After it was announced that the officer died, people outside the hospital prayed together.

Shortly after the prayer, they lined up outside of the emergency room doors as the fallen officer’s body was loaded into a van.

A procession was held just after 6:30 p.m. as the slain officer's body was transported from the hospital to the medical examiner's office.

After his body was brought inside the building, the officers who joined the procession got out of their vehicles, walked to the loading area, and gave one final salute.

A small memorial has formed outside of the Mesquite Police Department.

Members of the community who heard about what happened came to the station to drop off flowers and light candles to show their support.

"It was about 1:45 p.m. and I heard three pops go off, and then it was a pause, and then three more pops," recalled Chelsea Clay.

Chelsea and Terry Clay live across the street from the Albertsons and went out to see what was going on.

"I hadn’t been standing out here 30 seconds and there was a group of cops," Terry said. "There had to have been eight of them that were hunched down going in. It looked almost like a SWAT situation."

Investigators spent the rest of the afternoon collecting evidence, primarily focused on two pickup trucks, though police haven’t said if or how they were involved. 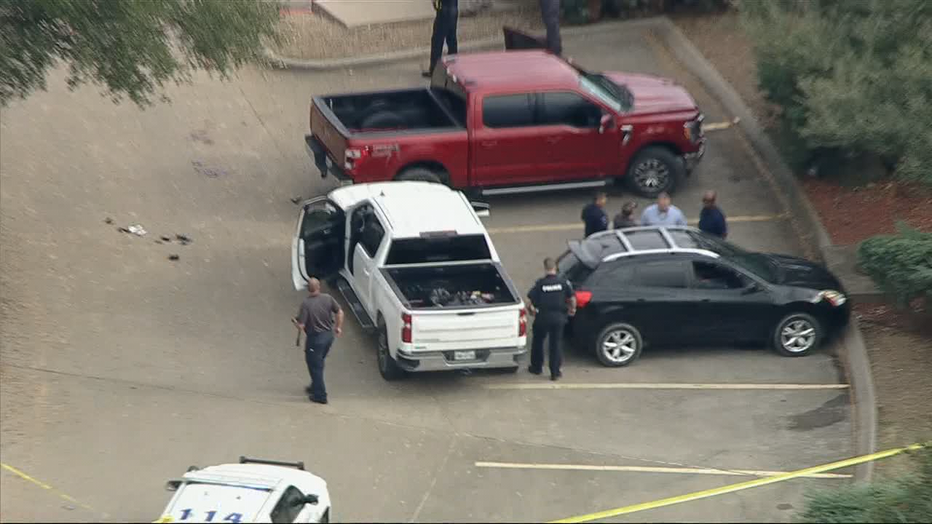 The tragedy has left people in the area stunned.

"You never expect a cop getting shot, in broad daylight, 100 yards from your house," the Clays said.

At nightfall, with so many questions still unanswered as to how this happened, some in the Mesquite community wanted to show support.

"This is family, we’re a close community," Flora Rodriguez said. "We’ve been here since I was in high school."

Though they may not know the officer personally, they are thankful he gave it all protecting the community where they live.

"These are people who spend every day protecting us, and for them to give their life in the line of duty is the ultimate sacrifice," Amy Williams added.

A Mesquite police officer was fatally shot in the parking lot of a grocery story Friday afternoon.