About 100,000 homes and businesses in Fort Worth are still being told to boil water. The city says it's dealing with an unprecedented number of water main breaks.

FORT WORTH, Texas - About 100,000 homes and businesses in Fort Worth are still being told to boil water. The city says it's dealing with an unprecedented number of water main breaks.

With all the frozen and damaged pipes, people in several cities still don't have running water that is safe to drink.

Some North Texas cities are opening drive-thru sites where people can pick up bottled water.

Roughly 100,000 homes and businesses in West Fort Worth are still under a boil water notice until at least Sunday.

Right now, the department says the city is focused on fixing a growing list of water main breaks.

"We still have several more days ahead of us. How many more days? I can’t tell you," said Mary Gugliuzza with the water department.

With all the frozen and damaged pipes, people in several cities still don't have running water that is safe to drink.

Crews have repaired roughly 250 water main breaks since Sunday with 117 more on the waiting list and another 172 pending complaints. Most of them have been due to aging cast-iron pipes.

"There’s hundreds of miles of it in our system," Gugliuzza said. "You can’t just replace it all in a short period of time. It’s going to take years and maybe even decades to get rid of it all."

The Texas Commission on Environmental Quality gave the all-clear after lab tests determined the tap water was safe to drink.

Bottled water is being given out to help households remedy the effects of a brutal winter storm.

Even with the lifting of the boil order alert for the northern portion of Fort Worth, the recovery is a slow process. 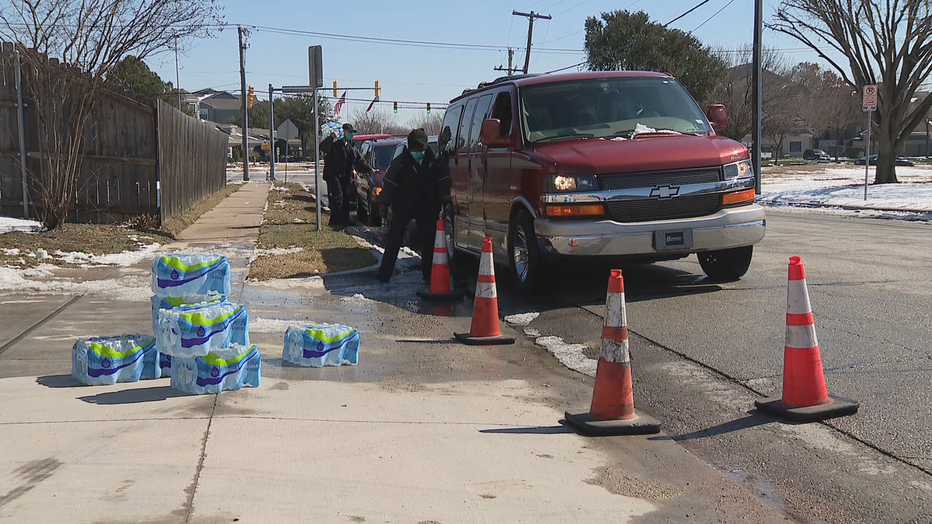 "My wife had surgery last week and she can’t use anything except clean water for her surgery scar. That’s something has been very hard on her," Michael Dowell said.

"Concerned about freezing pipes. We had no electricity for about 24 hours, it came around. We’re just more concerned about boiling water and freezing pipes, water main, and things like that. We just want to make sure we have water to boil to cook days and all that," Jared Igo said.

The city of Fort Worth, along with FEMA and local partners, stood up more than a dozen water distribution sites to deal with the clean water shortage.

"We got water from FEMA and now we’re getting additional water from our partners. The joint reserve base, the Marines are furnishing some smaller sites through neighborhoods where people can walk out and get it from their trailers," Fort Worth Mayor Betsy Price explained.

A look from SKY4 showed the line for water at Western Hills High School.

Wait times seemed to vary, but for the most part, all people who picked up water were thankful.

Water main breaks have left some Fort Worth residents without water altogether.

Many others were impacted by low pressure after power outages knocked water treatment plants offline on Monday.

Mayor Price agreed it all raises important infrastructure questions the city will need to address, but she said now is not that time.

"In the coming days, we will have time to sit down, ask the hard questions. What failed here and why? Are certain things in our water plants we already know that should’ve been addressed and weren’t? Sometimes major storms like this bring to light issues you didn’t know you had," Price said.

"We’re just so pleased with the city helping us out and everyone’s been really supportive. The neighborhoods helping each other where they can," Linda Miller said.

Fort Worth ISD is assessing damage right now. It says Friday was the first day they have been able to get people in to assess damage due to poor conditions and cold temps.

There are a number of schools that will have damages because Oncor sent the list of schools that had post without power earlier this week. They are assessing what are the big problems.

On Monday, principals and their staff members will go through their campuses and tell the district what needs to be repaired. At least 14 campuses had lost campus as of Tuesday or Wednesday.