Dozens of people, including community, police and city leaders, gathered in prayer and then marched through the streets of a DeSoto.

DESOTO, Texas - Dozens of people, including community, police and city leaders, gathered in prayer and then marched through the streets of a DeSoto.

It was designed to be a show of unity in the wake of Derek Chauvin's conviction.

More than 100 people took to the streets Wednesday afternoon. One organizer said this is not a death march but rather a justice march and an opportunity to show unity. 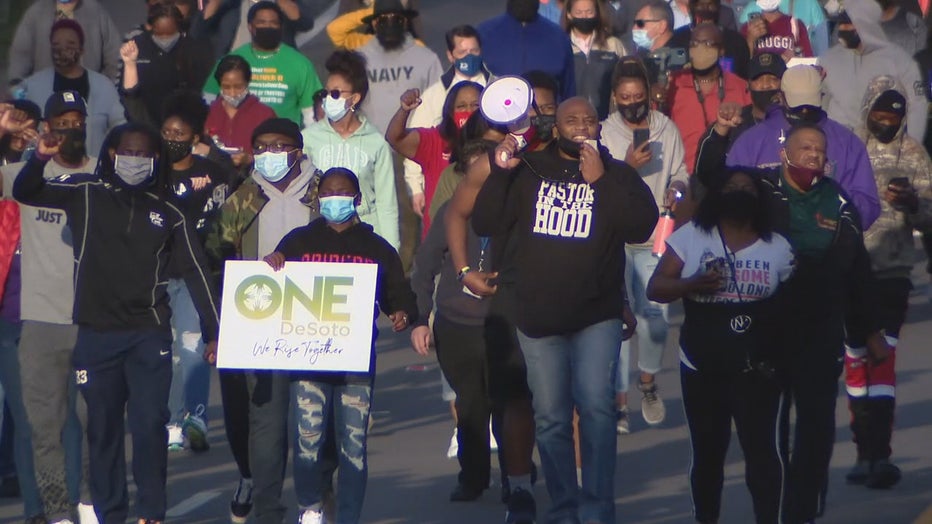 Debbie Hicks spoke of the struggle of being Black in America.

"That man had no reason to die. None at all," she said. "But this gives us a little hope. Maybe, maybe, just maybe there will be a change."

"The fight really isn’t over yet," said Jameson McBride. "I know there are many people here who can remember a time when they didn’t have all the opportunities that I have."

The goal of Wednesday’s march was prayer, reflection, unity and healing. A number of DeSoto streets were blocked off as more than 100 people marched together.

One DeSoto, a group that brings city and community leaders together, organized the rally.

"That’s the police holding each other accountable and that’s the community holding themselves accountable for what they do," said DeSoto Police Chief Joe Costa.

"What can we agree upon and I think when we get down to the brass tact’s of everything, we really all want the same, but it’s just about how do we get there," said DeSoto Mayor Rachel Proctor.

The belief is a sign of unity will break conversation barriers moving forward. They are conversations many believe are sparked by Floyd’s death.

The event ended on the steps of DeSoto PD with song and prayer.

There was an incident early in the rally where one person was arrested. The person was reportedly not affiliated with the group. He was seen getting into the face of the police chief along the walk. The chief tried to get away from him. This person reportedly is a known agitator in the community who consistently confronts police officers and does so on camera.

After a number of confrontations with the chief, several undercover officers took him away. He was taken down, arrested and charged with disorderly conduct.

The man was identified as Charlie Dominguez. He has a lengthy criminal history in DeSoto related to situations just like this. He’s currently in jail.