The debate over critical race theory is heating up in another North Texas school board election and the state legislature.

GRAPEVINE. Texas - The debate over critical race theory is heating up in another North Texas school board election and the state legislature.

Both the House and Senate have given initial approval to a bill that would limit what is taught about it.

And a Grapevine-Colleyville ISD board runoff appears to be drawing voters, like the recent Southlake Carroll ISD board election.

It's the final push for runoff votes between two school board candidates in the Grapevine-Colleyville ISD.

During crunch time, the topic of critical race theory being taught in the district as one candidate's platform caused the district to step in and say that is not true.

Two different color signs dominate the sidewalk outside the Grapevine Rec Center as incumbent Mindy McClure is looking to hold her seat against challenger Shannon Braun in the runoff for place one on the board of trustees. 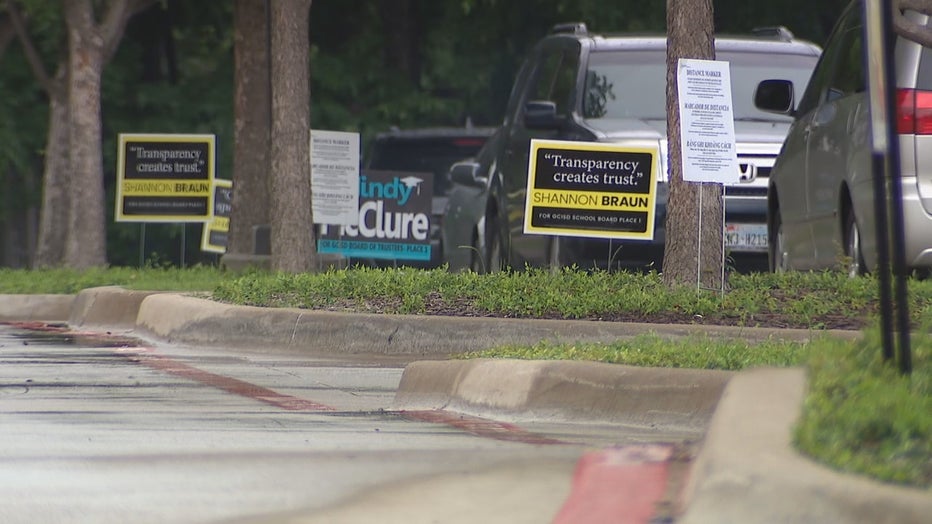 GCISD says parents have been asking about it and says that critical race theory is not included in its curriculum, emailing all parents: "students have the choice in how they approach an assignment or topic they research as long as they can demonstrate mastery of the TEKS."

FOX 4 reached out to Braun on Monday by phone, email and social media to be a part of this story and received no response.

"I feel like with some of the problems she is trying to say it is all critical race theory," McClure said. "It is nothing more than raising people to be respectful and tolerate of other cultures."

The race between the candidates is happening as House Bill 3979 looking to limit what Texas public school students can be taught about racism makes its way through the legislature.

The Senate passed it over the weekend and it heads back to the House after it approved a version earlier this month.

"I think it sends the message that our teachers and students aren’t capable of doing this on our own," McClure said.

"What we are doing here is giving some guidelines. So when those topics come up, the teacher has guidelines to follow," said Sen. Bryan Hughes.

The bill says "teachers can’t be forced to discuss current events or widely debated controversial issues" and "to the best of their ability provide diverse perspectives without deference to anyone."

Passionate debate came from Democrats who call the bill whitewashed.

"We should be teaching our children the history of this country so they won’t make the same mistakes that were made by generations before us," said Sen. Royce West."

West recently lobbied the Carroll ISD in Southlake to adopt a cultural diversity plan the district developed but did not implement after a lawsuit led to a temporary restraining order.

The plan was created after videos surfaced of some Southlake students using racial slurs off campus.

The issue appears to be motivating voters.

"It’s just unfortunate that that people aren’t running on issues and are trying to manufacture this for a campaign," she said.

Braun did receive more votes than McClure in the May 1 election 47% to 39%.

Early voting is all this week, and the special election is set for next Saturday.