Police say Nakemia Bryant and Mical Ford were caught on surveillance on March 16 walking out of a convenience store off Lake June Road and North Masters Street in Pleasant Grove. Police say the first suspect they arrested confessed to everything and ratted her partner out. They are now looking for him.

DALLAS - Dallas police have identified the second person they want to find after five Amazon delivery vehicles were stolen across Dallas.

Police say the first suspect they arrested confessed to everything and ratted her partner out.

All of the trucks have been located, but $15,000 worth of packages and the second suspect are missing

Alicia Deavila is familiar with Amazon trucks on her Southeast Dallas street since she orders off the website a lot.

"Normally, I’ve seen the driver because I wave at him right when he comes out," she said.

Deavila is now disturbed to hear an Amazon driver parked nearby was attacked on the job.

"I cannot believe it. Feel so bad for the driver," she said.

Police say Nakemia Bryant and Mical Ford were caught on surveillance on March 16 walking out of a convenience store off Lake June Road and North Masters Street in Pleasant Grove. 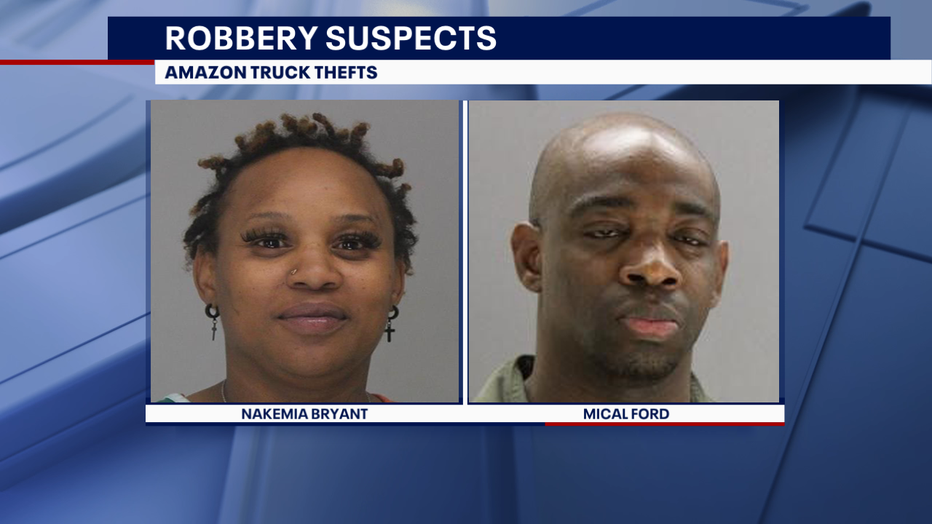 Investigators say the two stopped and looked at each other once they spotted an Amazon truck parked across the street. When the delivery driver was walking back to the truck, police say Ford punched the driver in the face. Both suspects jumped in the van with ford behind the wheel.

"They don’t get paid to get beat up or assaulted and left on the street," Deavila said.

One of the drivers targeted Domenique, who didn’t want to share her last name. She says they stole her vehicle on March 22.

Cameras from inside the Amazon vehicle caught the attention of Domenique’s manager, who recognized the two from a previous robbery.  A tracking device led police to the truck.

"They went and found the vehicle, and the guy jumped out and got into another vehicle and drove away," Domenique said.

Bryant was arrested over the weekend on an outstanding warrant for driving while intoxicated out of Balch Springs.

Bryant’s arrest affidavit reveals she claimed at first that she didn’t recognize Ford in the surveillance stills from inside the van.

Some of the stolen packages could’ve affected Chad Miller’s tenants. He owns an apartment complex in East Dallas where police say Bryant and Ford stole one of the five trucks.

"Somebody just trying to do their job. These guys are out here men and women are hustling," he said.

Bryant claimed she only had known him for a short time, and he lived in her neighborhood. But there is surveillance evidence of the two walking into her apartment hours after one of the robberies.